KIM LAWTON, correspondent (Follow her on Twitter and Facebook): This is Grammy nominated singer/songwriter Jennifer Knapp. She’s leading a workshop on faith and sexuality at a conference co-sponsored by Vanderbilt Divinity School. It’s a vastly different gig from the days when Knapp was considered one of the top artists in the very conservative contemporary Christian music scene. In 2010, after a long hiatus, Knapp publicly came out as a lesbian. She says reactions from some in her evangelical audience were deeply painful.

JENNIFER KNAPP, Singer/Songwriter: Burn in hell. You're going to hell. There's something wrong with you and your faith. You can’t—you're not a Christian. You've never been a real Christian. Anything that you've ever contributed to the faith community is a lie.

LAWTON: But she has received support from evangelicals as well. And as society increasingly accepts LGBT issues, Knapp says she sees more and more evangelicals reexamining their views. 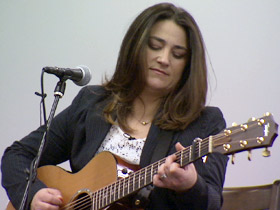 KNAPP: I think it's an error to write off faith communities as incapable and as negative to the LGBT story. In fact quite the opposite. I think there are people there that are ready to love and embrace and shift the balance of what we think we see as the LGBT acceptance in our community, and from a really beautiful level, from a level of faith and spirituality.

LAWTON: Evangelicals have been among the staunchest opponents of homosexuality. They cite the Bible.

REV. J.D. GREEAR, The Summit Church: The traditional understanding of how the Bible teaches sexuality is that sex is something between one man and one woman in a monogamous marriage and that anything outside of that is considered to be sin against the laws of God.

LAWTON: J.D. Greear is pastor of The Summit Church, a megachurch in Raleigh/Durham. He doesn’t believe large numbers of evangelicals are changing their minds. But he acknowledges, homosexuality can be a tough issue. 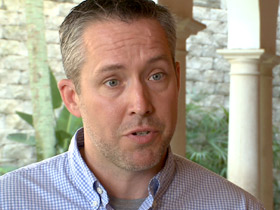 GREEAR: It’s difficult to talk about because people immediately make assumptions about you and how you feel. If you say, well this is wrong, then there’s assumptions as to, you know, oh that’s a spirit of hate. It’s something I think is challenging for pastors to reckon with, wanting to be faithful to what the Bible teaches, what they believe the Bible teaches, and then also be loving toward people and embracing.

LAWTON: With the Supreme Court taking up a case that could recognize same-sex marriage across the country, conservative Christians are debating how best to respond.

RUSSELL MOORE, Ethics and Religious Liberty Commission: It seems every single week there’s another flashpoint somewhere around the country over this set of issues, not to mention that the personal questions of how families grapple with these sorts of questions and how churches articulate our beliefs on those things. I think it’s one of the most pressing issues we face right now.

LAWTON: Russell Moore is president of the Southern Baptist Convention’s Ethics and Religious Liberty Commission and currently, one of the most prominent evangelical voices on gay issues. 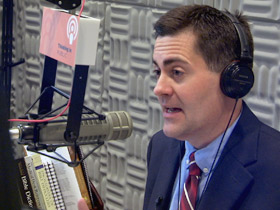 MOORE: Christianity has existed in cultures that were very hostile to the way that we see the world and so, American culture is changing. We simply have to hold on to the truths that we believe have been articulated to us, and we have to do it in a way that is balancing of truth and grace.

LAWTON: Numbers can vary depending on how “evangelical” is defined, but strong opposition to gay marriage persists. A 2014 poll by the Public Religion Research Institute found that almost 70 of white evangelicals opposed same-sex marriage—the highest of any religious group. However, the same poll found that 43 percent of millennial evangelicals ages 18-33 would support it. At this year’s annual conference of The Gospel Coalition, several sessions were devoted to discussing how best to confront the wider culture.

COLLIN HANSEN, The Gospel Coalition: I think some younger Evangelicals have grown up not even knowing or not understanding that Christianity requires you to push back against the world.

LAWTON: Still, The Coalition’s Collin Hansen is among those arguing for a different tone in the debate. 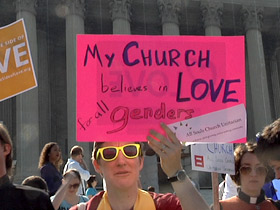 HANSEN: What might look courageous to you might look bigoted to someone else. So our challenge is in our courage, to look like Jesus looked, which is also fully compassionate and loving toward those, even those he was confronting.

LAWTON: While some LGBT advocates welcome a new, kinder tone from evangelicals, many say without a change in message, it’s not enough.

BRANDY DANIELS, Vanderbilt Theology Student: It’s sort of like a trick, right? Or it feels like a trick. Someone will feel safe to come out or share their story.  And they won’t feel safe after they’ve come out or they’ll be told to not act on those desires or that celibacy is the only option for them.

LAWTON: Brandy Daniels says after she came out in 2006, she was no longer welcome at her evangelical grad school. Now she studies Queer Theology at Vanderbilt. She says denying LGBT people the right to marriage is tantamount to withholding spiritual benefits from them. 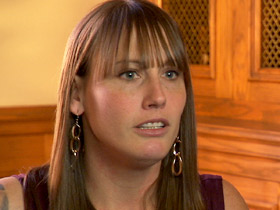 DANIELS: They lose out on an opportunity for sanctification, to grow more holy and closer to God. Because it’s through our relationships with others that that happens. By denying same-sex couples that opportunity we’re denying them an opportunity to experience and participate in God’s love for us and for one another.

LAWTON: Some are urging conservative Christians to reconsider their interpretations of Scripture, particularly passages on sexuality by the Apostle Paul. Matthew Vines is author of God and the Gay Christian.

MATTHEW VINES, The Reformation Project: We don’t see in any kind of consistent or widespread or prominent way, in ancient literature, long-term, faithful, monogamous, same-sex relationships between equal status adult partners. And so what I’m saying is we just need to recognize that Paul is not speaking to the question of same sex marriage, nor is he speaking to the question of gay Christians.

LAWTON: Vines grew up in the evangelical world. In 2012, he posted a YouTube video of a more than one-hour-long scholarly lecture where he argued that it is possible to affirm the full authority of the Bible while also affirming committed same-sex relationships. 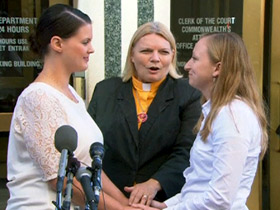 VINES: What the New Testament teaches about marriage is that it is fundamentally about a covenantal commitment to one’s spouse. It’s about self-sacrificial covenant love that reflects God’s love for us in Christ. Same sex couples are just as capable of living out that kind of a relationship as are opposite sex couples.

LAWTON: Most evangelicals are not persuaded.

MOORE: God created and designed marriage and sexuality, the one flesh union of a man and a woman, to picture the gospel of Jesus Christ. We didn’t make these doctrines up. We received them from Jesus and the Apostles and we don’t have any authority to change them.

VINES: Are a majority of Evangelicals that ready to change their positions right now? No. But some of them are and all you need is some people who are willing to do that and then to give them the Biblical basis and argument to support that position. And if they can stay in their churches after changing their position, it starts to significantly shift the dynamic.

LAWTON: Also hoping to shift the dynamic, Jennifer Knapp has started a group called “Inside Out Faith,” which encourages gay people of faith to share their stories, just as she has.

KNAPP: I think the challenge is for us to be compassionate to one another, to try and let our particular views and experiences not be things that are mandates that other people have to accept.

LAWTON: Greear agrees about the need for more compassion in the debate, but says evangelicals must have the right to stay true to their convictions, no matter now unpopular in the wider culture.

GREEAR: We want to respect your right to say what it is you think, but it’s not fair for you to turn to us and say, you don’t get to express your viewpoint because immediately, even though you agree with 2,000 years of church history, how Christians have interpreted it, what you are saying is out of the bounds of civil society.

LAWTON: And that’s a debate that will continue, no matter what the Supreme Court ultimately does. I’m Kim Lawton reporting.

What challenges does growing social acceptance of same-sex marriage and other LGBT issues pose for evangelicals? In a historic ruling in June, a divided US Supreme Court made same-sex marriage legal across the country. Religious groups had filed briefs on both sides of the issue. R&E visited Nashville, Tennessee to report on the extent to which evangelicals are reexamining their views about sexuality, marriage, and LGBT acceptance. Correspondent Kim Lawton talks to singer-songwriter Jennifer Knapp, Russell Moore, president of the Southern Baptist Convention’s Ethics & Religious Liberty Commission, Matthew Vines, author of “God and the Gay Christian,” and more.