FRED DE SAM LAZARO, correspondent: In just the past few weeks, he’s appeared at a music festival in England, a presidential library in Houston, and a stadium near Los Angeles. There is perhaps no world figure today with a more diverse base of fans and well-wishers.

(speaking to His Holiness the Dalai Lama): Why are you so popular globally? Why are you a rock star?

HIS HOLINESS THE DALAI LAMA: I don’t know. I never pay attention about that, why people praise me.

DE SAM LAZARO: And even as he celebrated his 80th birthday, he said he’s not concerned about another matter that’s on many minds: Who will succeed him? Or, as he increasingly has said in recent years, whether anyone will. 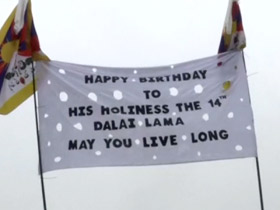 HIS HOLINESS THE DALAI LAMA: Many people showing interest about the institution of Dalai Lama. For me, not much interest.

DE SAM LAZARO: That’s significant. Like the familiar laugh, his role as Dalai Lama—the world’s best known Buddhist leader—has been central to who he is: the reincarnation of Dalai Lamas going back six centuries, leader of a fabled once-upon-a-time country high in the Himalayas who fled with US help to India in 1959 following a failed uprising against Tibet’s annexation by Mao Zedong’s revolutionary People’s Republic of China.

Today, at his home base in Dharamsala, India, he keeps a full schedule. It begins early each morning as a diverse crowd lines up for a chance to meet him.

Many are from the tens of thousands of Tibetans who followed him and settled in India. Here the Dalai Lama has established centers of Buddhist learning and a secular Tibetan government in exile, allowing him a largely ceremonial role, he says.

HIS HOLINESS THE DALAI LAMA: For example, in India at least about 100 really top scholar and genuine practitioner. These are holder of almost 2000-year-old tradition. You see, in 2011 I totally retired. Now no connection with political responsibility.

DE SAM LAZARO: He says he’s now focused on his moral responsibility as an advocate for world peace—one that’s won him numerous awards including the Nobel Peace Prize. That peace, he says, must start with the individual, with compassion for one’s fellow human beings. It’s a message that he says isn’t uniquely Buddhist. 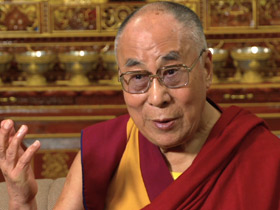 HIS HOLINESS THE DALAI LAMA: All major religions teach the practice of compassion, love, forgiveness, and tolerance. If people who really, seriously, sincerely follow their own tradition, then brings inner peace. Through that way, genuine peace.

DE SAM LAZARO: He wants to see a common ethics curriculum taught in schools, he says, because religious leaders have too often focused on exclusion and division, leading to both conflict and growing inequality—between and within societies.

HIS HOLINESS THE DALAI LAMA: Like America, very rich country but many people poor. And then India and China now developing great potential. Like Africa also, lot of potential. But I think this lack of moral principle, in that respect I think we need some sort of lesson, education about socialism. I am socialist. Then furthermore as far as social economy theory concerned I am Marxist. I am Buddhist Marxist.

DE SAM LAZARO: But he says political leaders who pledged themselves to the ideals of Marxism or socialism have never delivered. He says one prominent example, China, is now trying to regain its moral compass. Its leader, Xi Jinping, recently acknowledged a role for its religious traditions, including Buddhism.

HIS HOLINESS THE DALAI LAMA: It’s unthinkable, a Communist, atheist leader of that express publicly importance of Buddhism is something quite unique. So this, I think the reality now shows [that] just material development alone will not get satisfaction to the public, to the people. 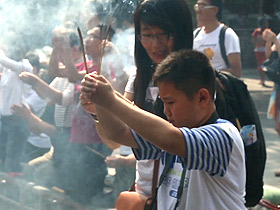 DE SAM LAZARO: While the Chinese government and Communist Party have called for more tolerance and religious freedom, they have condemned the Dalai Lama as a separatist and a puppet of the West. With China’s growing prominence in global trade, many Western nations have become more muted in their support of the Dalai Lama. For his part, the exiled leader, while alleging human rights abuses and the destruction of Tibetan culture in his homeland, has moderated his demands.

HIS HOLINESS THE DALAI LAMA: We seeking genuine autonomy, not seeking independence.

DE SAM LAZARO: But he’s drawn a line in the sand on one issue: China’s insistence that the government there approve the next Dalai Lama.

The anointing can take years after the Dalai Lama’s death, in which monks look for supernatural signs to lead them to the young boy who is the reincarnation. The current Dalai Lama, born of simple peasant stock as Tenzin Gyatso, was identified at age four and installed at 15, after years of rigorous study.

HIS HOLINESS THE DALAI LAMA: As far [back] as 1969 I publicly stated this institution whether should continue or not [is] entirely up to Tibetan people.

DE SAM LAZARO: In the modern age, when democratic governance and Buddhist scholarship are much more accessible, he says he’s not sure there’s a need for a new Dalai Lama. When he turns 90, he says he’ll consult on the question with religious elders and the Tibetan people before deciding whether to be reincarnated, like his predecessors, or whether to end the tradition. For now, it’s a decision that this very public figure says is very private.

DE SAM LAZARO: His doctors say that his passing into that next life is not likely imminent. The trademark laugh is a symptom of inner peace and happiness, they say, the key to a long life.

For Religion & Ethics NewsWeekly, this is Fred de Sam Lazaro in Dharamsala, India.

He says he is “totally retired” from any political responsibilities as the leader of the exiled Tibetan Buddhist community, but old age has not diminished his role as an active and outspoken advocate for world peace and inner happiness. In an interview at his home base in Dharamsala, India with correspondent Fred de Sam Lazaro, the Dalai Lama says all major religions teach the practice of compassion, love, forgiveness, and tolerance, and he’s not sure there is a need for a new Dalai Lama.

Profile on the Dalai Lama