KIM LAWTON, correspondent:  With wall-to-wall media coverage and hundreds of thousands of people flocking to catch even a glimpse of him, Pope Francis seems to have captivated much of the nation.

REV. GERALD DURLEY (Interfaith Power and Light): He’s a spiritual giant. He’s not just a Catholic. I think he’s a prophet for these times.

LAWTON:  And like a prophet of old, Francis has been calling the US—and the entire world—to move in a new path…one that seeks a better world for all people.  At the United Nations Friday, Francis outlined a host of serious problems that need to be addressed to ensure that the future will be secure for all.

POPE FRANCIS (via translator): And so it will, if the representatives of the states can set aside partisan and ideological interests and sincerely strive to serve the common good. 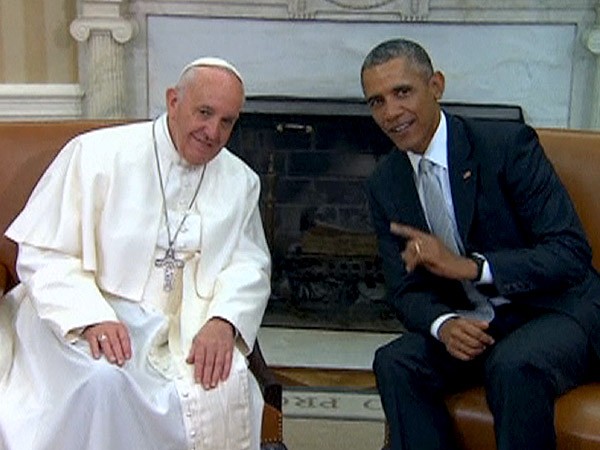 LAWTON: In all of his major policy speeches, Francis has called for peace, mercy and justice.  And he has stressed his now-familiar priority issues: concern for the poor and disadvantaged, immigration, refugees and the environment. President Obama thanked Francis for his moral authority:

PRESIDENT OBAMA: In your humility, your embrace of simplicity, the gentleness of your words and the generosity of your spirit, we see a living example of Jesus’ teachings.

LAWTON: Liberals have been pleased. But Francis cannot be put in any rigid political boxes. At the White House, he also raised the US bishops’ concerns about maintaining religious liberty and supporting the institution of marriage. Both are key issues for conservatives. As the first pope to address a joint meeting of Congress, Francis praised much of America’s legacy. He referred to Martin Luther King, Jr’s dream for the nation.

POPE FRANCIS: I am happy that American continues to be, for many, a land of “dreams.”

LAWTON: Francis again raised his priority issues. And, he repeated his concern for the family, which he said is “being threatened, perhaps as never before, from within and without.” The pope has been met by enthusiastic crowds at every stop. Many of those unable to attend in person have been trying to participate in the visit in other ways. In places including DC’s Franciscan Monastery, people have been gathering to watch various events. Others have been doing special service projects in honor of the pope. Many Catholics have high hopes for the lasting impact of this visit.

ANGELA STASZEWSKI: I’d like our church to unite and be behind him and hopefully get more people back to the church.

LAWTON: Hispanic Catholics, who make up about 34 percent of the US church, say this Latin American pope has been especially meaningful for their community.

GUSTAVO ANDRADE: We are also incredibly moved because at a time when the discourse around immigration has been dominated by fear and hatred, that he has come and breathed new life into the debate. 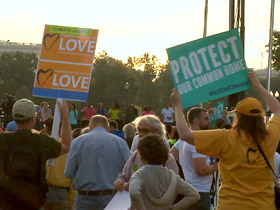 LAWTON: Non-Catholic people of faith have also been engaged in this papal visit at unprecedented levels. Religious groups across the spectrum are hoping to gain momentum for their key issues by tying them to the pope’s agenda. As the pope spoke before Congress, faith-based activists helped lead a rally in front of the Capitol urging politicians to follow up on Francis’s concern for the environment by adopting new policies to address climate change. Rev. Gerald Durley is a veteran of the civil rights movement.

DURLEY: He is that kind of energizing, kinetic voice that’s inspired all of us regardless of race, color, faith…that’s Pope Francis’s, I think it’s his calling.

LAWTON: Interfaith humanitarian leaders praised the pope’s focus on poor people and pledged to keep working on that issue. They called on the nation to shift priorities in order to end hunger and poverty by the year 2030.

RUTH MESSINGER (American Jewish World Service): This is an extraordinary moment. The leader of a major religion in the world who espouses these same causes is here, speaking about them.

LAWTON: Still, the visit hasn’t been without controversy. During a prayer service at St. Matthew’s Cathedral, Francis told the bishops he supported their “generous commitment to bring healing to victims” of the sex abuse crisis. This generated an angry response from the Survivors Network of those Abused by Priests, who claimed that in fact, the bishops quote “have shown cowardice and callousness and continue to do so.” Another point of controversy was Native American reaction to the pope’s elevation to sainthood of Father Junipero Serra, an 18th Century Franciscan friar who helped bring Catholicism to California. It was the first canonization in the U.S. Father Serra is honored by many Catholics, especially Hispanic Catholics, for his missionary work. Father Ken Laverone helped lead the effort for him to be declared a saint. 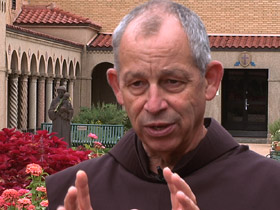 REV. KEN LAVERONE (St. Francis of Assisi Parish, Sacramento):  Despite hardships, despite physical difficulties, despite political difficulties, Junipero Serra always went forward and was determined to fulfill his dream in following the footsteps of Jesus Christ, and in particular, in following in the footsteps of St. Paul and of St. Francis of Assisi.

LAWTON: Many Native Americans argued that early missionaries brutally imposed their religion and helped to destroy indigenous cultures. During his homily, spoken in Spanish, Francis said Serra had sought to protect dignity of the native community. About 25 percent of Native Americans are Catholic. Some of them called for healing from the wounds of the past.

SISTER KATERI MITCHELL (National Tekakwitha Conference):  The intergenerational hurts that have stemmed really from the first encounter on this continent way back in 1492--we reflect, we remember, but let us let go. Let’s heal, and we need to move forward.

LAWTON: For many, the most important part of the visit so far has not been the speeches or the meetings, but rather the images of Francis as a pastor. Images of him instructing his security detail to bring forward a small immigrant girl who had slipped through the barricade. Images of him leaving the halls of Congress to visit Catholic Charities, where he was surrounded by homeless people, immigrants and needy families.

LAWTON: And, many Catholics say, that example is touching the entire world. I’m Kim Lawton reporting.

BOB ABERNETHY, host: We want now to try to sum up the impact of the pope’s trip. Our managing editor, Kim Lawton, is here, and so is Father Tom Reese, a longtime expert on the Vatican and the Church. He is senior analyst for National Catholic Reporter. Tom, Kim, welcome to you. Nice to have you back here.

There were a lot of messages that the pope brought to Congress and to the UN. What was the thread? Was there a common denominator? 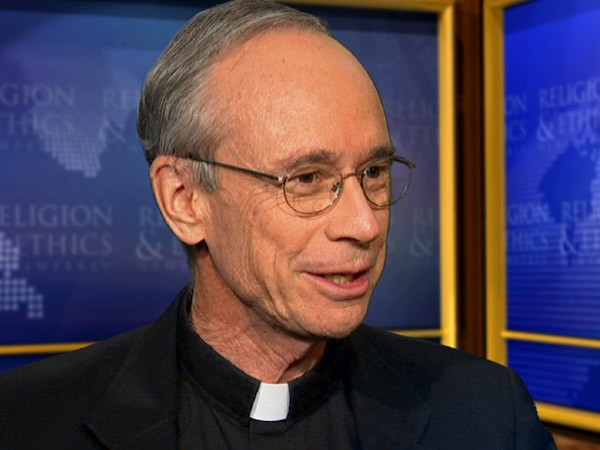 REV. THOMAS REESE, SJ (Senior Analyst, National Catholic Reporter): I think the thread was his desire to be a prophetic voice, to talk about the issues that face our nation and the world. And these are issues like climate change, concern for the poor, the refugee crisis, the immigrants. These were things that he held up because these are the people that are very close to his heart.

KIM LAWTON: And it was interesting to me that everything went back to the Catholic teaching of human dignity. So whether he’s talking about the environment or immigration, everything he tied back to the individual and how it affects people, and that we should be, when we make the policies, these big international policies, we should be mindful of how that touches people, and especially vulnerable people. That was the thread no matter what issue he was talking about. It came back to that.

ABERNETHY: And he visited a lot of vulnerable people, too.

REESE: The contrast between his visit on Capitol Hill and his visit at the Catholic Charities homeless shelter was dramatic. You know, here with all the power brokers, the powerful people, he had a challenging message. But then when he went and visited with the homeless, we saw them crowd around him, and he embraced them.

LAWTON: That was really everywhere.

ABERNETHY: And it didn’t seem like something was staged.

REESE: No, no. These are his people. These are the people that he’s most comfortable with. I think he was happy to be off the Hill and back with the real people of Washington. 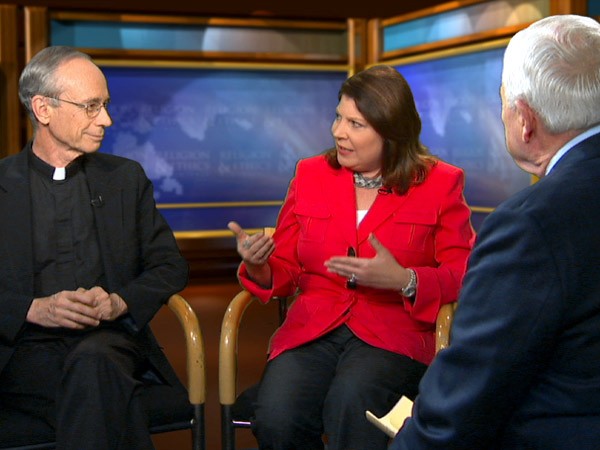 ABERNETHY: Tom, when you talk to people who got close to the pope, they were almost—well, they had had a profound experience, and they spoke about it and it was more than just seeing a celebrity. It was something—and words fail me, but you may be able to describe what this sense was, this feeling was that people had.

REESE: Well, he’s not an ordinary celebrity. Celebrities are all about selling themselves. They are all about “me.” And this pope is about selling Jesus, about selling the Gospel. And when he’s with other people, it’s not about him, it’s about them, and you can just see that in the way he reaches out to people, the way he interacts with them. And it’s this authenticity. He’s the real deal, you know, and he not only preaches, he walks the talk.

LAWTON: Well, I was just going to say one of the things that I was really struck by this past week is the extent to which some of those same feelings are extended beyond the Catholic fold, so that you had Protestants—there was a poll that came out that said that a lot of Protestants have a more favorable view of the Catholic Church because of Pope Francis. Now, they don’t agree, they’re not more favorable toward the theology of the Catholic Church, but, you know, just that presence, his personality has given them a more positive impact. So many people—Jewish groups, Hindu groups, Muslim groups were also engaged in this visit, and that was really interesting. It was something that spread beyond the Church itself.

ABERNETHY: But this feeling, this experience, spiritual experience that people had went way beyond words.

REESE: Absolutely. I mean, he models what it means to be a Christian. He models what it means to be like Jesus. And that’s what people see in this man. That’s why they’re so attracted to him, and they see him as so different from the typical celebrity who’s an egomaniac. This is a man who’s totally humble, totally selfless, and reaching out to people and caring about people.

LAWTON: It will be interesting, though, to see the extent to which this feeling, this, you know, spiritual connection people have, to what extent that actually translates into their daily lives. Is that going to make a difference, having touched Pope Francis? Is that going to make someone pray more or spend more time in the Church or get more involved in ministries to the poor? And that’s something that, you know—is it just this temporary high or is it something that is profoundly going to change the Church?

LAWTON: And he’s not in their local parish every Sunday.

REESE: No, and that’s where we live our faith is in the local parish. So when they come back, they want to meet somebody like Pope Francis. And if the clergy and the bishops and the people aren’t like Pope Francis, or namely like Jesus, more welcoming, compassionate, loving, they’re going to turn around and never come back.

ABERNETHY: Tom, our time is up. I’m sorry. Thanks to Kim Lawton, our managing editor, and to Tom Reese of National Catholic Reporter.

It was a busy week for Pope Francis in the US—appealing to Congress and the UN, encouraging his bishops, greeting the poor, and warming the hearts of many thousands of admirers. Managing editor Kim Lawton and National Catholic Reporter senior analyst Father Tom Reese, SJ reflect on the significance of the pope’s visit.

Pope Francis in the U.S.