KIM LAWTON, correspondent (Follow her on Twitter and Facebook): For many football fans, and especially in Buffalo, Jim Kelly is a hero. A Pro Football Hall of Fame quarterback, he played for the Buffalo Bills from 1986 to 1996. He led the team to a record four consecutive Super Bowls, and they famously lost all four. On the field, he earned a reputation for being what was termed “Kelly tough.” But for Jim and his wife Jill, toughness was most profoundly tested by what followed off the field:  a terminally ill son, problems in their marriage, and Jim’s struggle with cancer. They say their evangelical faith has given them the strength to persevere.

JIM KELLY: You can only be tough so much. And I've just been very blessed that I have an open heart now, and I listen a lot more than I used to listen.

JILL KELLY: Those things that we go through that cause us to be tested, or to doubt, or to fear, those things make us stronger in our faith. 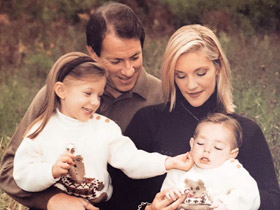 LAWTON: The Kellys met and married at the height of Jim’s football career and enjoyed the celebrity that came with it. They had a daughter, Erin, and then in 1997, just a few weeks after Jim retired from the Bills, their son Hunter was born. Daughter Camyrn was born in 1999. When Hunter was just four months old, he was diagnosed with a genetic disease called Krabbe Leukodystrophy, which affects the nervous system. They were told he likely wouldn’t survive to his second birthday.

LAWTON: Both Jim and Jill had been raised Catholic, but neither was very religious. Jill says her devastation over the diagnosis sent her on a desperate spiritual search.

JILL KELLY: There was no cure, there was no treatment, there was nothing that money or celebrity could buy for Hunter. I was like 'well, who's this God that I think that I know? He's there, but I don't understand him' and 'I've heard about him my whole life but who is he really?' And so it was Hunter's suffering that caused me to seek after God.

LAWTON: She became a born-again Christian. 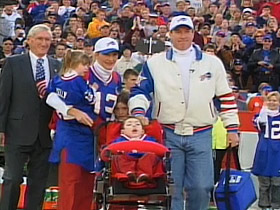 JILL KELLY:  Everything changed then. It’s not something, you know, a feel-good thing. It's not like, 'phew, this makes me feel better.' No. I mean life is still hard.  But God is still good.

LAWTON: Jim says at the time, he told her not to push her new beliefs on him.

JIM KELLY:  I didn't come to faith until after Hunter passed away. So, for me, yeah...mad at God, things like that. Things that I probably shouldn't have been thinking. I don't know what the word is...

JILL KELLY: It was being real, is what it is. We can get mad at God.

JIM KELLY: But, it is what it is. But the thing is, the old saying 'it's God's perfect timing,’ and I know where I'm at now, and that's all that counts.

LAWTON: The Kellys were determined to help Hunter live the best life possible. They launched the Hunter’s Hope Foundation to promote awareness and research about the rare disease.

JILL KELLY: No one was doing anything about the disease. No one. Obviously with Jim's platform, you know, what a blessing it is to be able to use that.

JIM KELLY: The bottom line is you want to make a difference. And we know that through not only our story, but seeing what Hunter went through, we knew we wanted to do something. 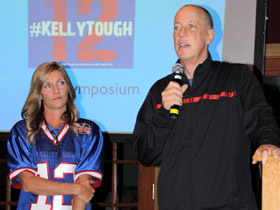 LAWTON: A big part of the foundation’s work is supporting families affected by Krabbe. Nineteen-year-old daughter Erin says that’s been important to her.

ERIN KELLY: It's just a connection that is unlike any other thing because no one really knows. My friends, most of my friends, have never gone through something like this. So they don't know what it's like to walk that journey of watching your little brother just struggle to live every single day of his life.

LAWTON: In 2004, the Kellys and Hunter’s Hope helped found the Hunter James Kelly Research Institute at the University of Buffalo. Through their efforts, more and more newborns are now screened for Krabbe so they can be given an umbilical cord blood transplant in the narrow window when progression of the disease can still be slowed. Beyond all medical expectations, Hunter lived until 2005, when he was 8 and a half, although he was never able to walk or talk.

JILL KELLY:  God used him in so many ways. I mean, we learned patience and love, unconditional love, selflessness. I mean all of the things that, you know, you don't learn in books, and that neither of us had learned up to that point in our lives as an adult.

JIM KELLY: You talk about role models, people talk about people that you admire, I admired his toughness in what he went through, and how he changed my life. I know we probably wouldn't be together if it wasn't for the suffering of our son, because he changed both of our lives...for the good. 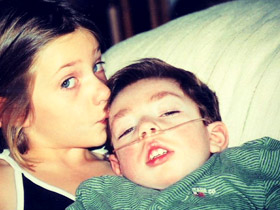 LAWTON: The Kellys have been open about experiencing marital problems. They don’t speak about it in detail, but in Jill’s 2010 book Without a Word, they describe how after Hunter’s death, Jim confessed he had been unfaithful. He sought pastoral counseling and decided to embrace faith for himself.

JIM KELLY (in speech):  I wanted to able, for my two daughters, to walk in that front door and when they do, to look at their daddy with respect. I was losing all that. And I knew that if I didn’t change my life, I was going to lose everything that I worked so hard for.

LAWTON: During a recent appearance at Liberty University, where Erin is a student, Jim described his journey, although he admitted, he’s still not completely comfortable talking about it. 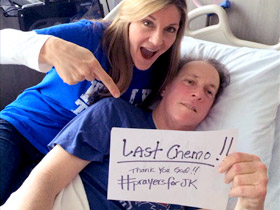 LAWTON: The Kellys still live in Western New York where they attend a large nondenominational church. They say their faith has been crucial in dealing with their latest battle. In June 2013, Jim was diagnosed with cancer of the jaw. After surgery, he was proclaimed cancer-free. But then in 2014, more cancer was discovered in his nasal cavity, and more aggressive treatments followed. Jill says the family bombarded God with questions about why.

ERIN KELLY: Watching my dad suffer through cancer is probably the hardest thing I've ever gone through. We just have found so much strength in Christ in the midst of my father's weakness, and so, although it has been extremely hard, God has blessed us in the midst of it.

LAWTON: At first, Jim didn’t want to go public about what they were dealing with.

JIM KELLY: I'm a private person, and I really didn't want that. But my wife said that, you know, "We need as many people praying for you as possible." And it didn't take me very long to realize she was right.  Again.  (laughs) 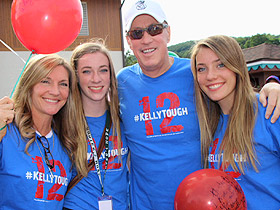 LAWTON: Jim’s former Bills teammates and the Western New York community have rallied around them.

JIM KELLY: People go "why do you live in Buffalo?"  Well, number one: the people. Number two is we love the Buffalo Bills. But number three, if we want to go south for a couple weeks, we'll go south. I mean, if you want to get out of the cold weather, you can do that.  But you can't take the people with you.

JIM KELLY: You know, he would be 18 years old. What would he be like? Where would he be going to college at? Would he be playing football? I’ll never know those things. But I’m happy with the life that I have. And I live every day to its fullest. And I know some day, though, I will see him again.

LAWTON: Jill and Erin have written a new book called “Kelly Tough.” The family says they are sharing their experiences in order to encourage other people going through difficult times.

JILL KELLY: It's not, you know, ‘Oooh, look at the Kellys.’ It's like ‘look what God has done.’ Look what we've gone through, but look at how God has used that. So we always point back to him. We don't want…even though it's our story, it's really about the greater story.

LAWTON: And they say that’s the real essence of being Kelly tough. I’m Kim Lawton in Buffalo.

Pro Football Hall of Fame quarterback Jim Kelly led the Buffalo Bills to a record four consecutive Super Bowls in the 1990s. But off the field, he and his wife Jill have faced some tough challenges, including a terminally ill son, marital problems and Jim’s cancer. They say their evangelical faith has given them the strength to persevere.