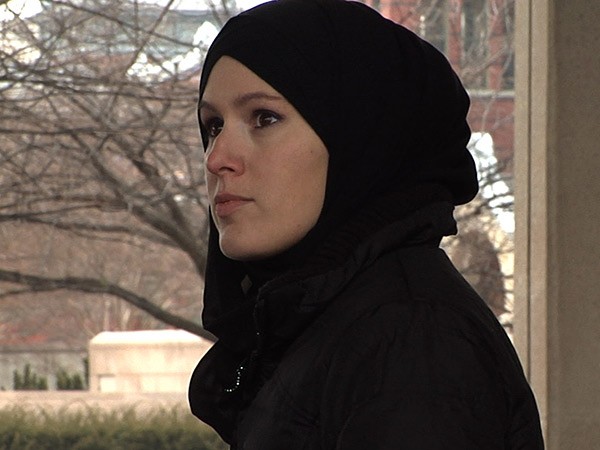 YASMINE ISON (Muslim): I was already in the Army prior to my conversion. When I first started wearing the hijab to work you could see people’s internal conflicts with having to see me in it. People would just kind of make little comments, like “Are you trading sides?” You know, “What are you doing? Is it Halloween?” I don’t know why they felt comfortable saying it, but they did, and it was very hurtful.

ANGELA BUI (Non-Muslim): She asked me [to wear the hijab for a day], and I accepted. I was born and raised Catholic, basically the type of Catholic that go to services on Easter and Christmas. I took the hijab challenge to get out of my comfort zone and do something I wouldn’t normally do.

ISON: When I put the hijab on Angela, I put the tube on her first so that we could bring her hair back. And then I put her hijab on her and pinned it down so that it wouldn’t move around.

BUI: At first it was awkward. It was getting used to it and kind of not caring what people think, or do, after a while.

ISON: In Islam we wear hijab to cover our modesty, to protect us and bring us closer to Allah. It took a lot of courage for her to do that. You know, she’s been around, and she’s seen my posts on Facebook about when I’m getting ridiculed, when I’m getting treated differently, and just some of the things I’ve been through while wearing it.

BUI:When I was driving, someone looked at me, but I didn’t know if that was because of the headdress. In the elevator there was some people that looked at me. Some smiled; some just didn’t show any emotion.

I don’t think I would do it again, just because it’s not who I am. It was a positive, eye-opening experience, something that I never thought I could bring myself to do. It shows me what women that wear it all the time go through, whether it’s negative or positive. It’s just an eye-opening experience that I’m glad I got the chance to do it.

Watch two more women, one a Muslim and one a non-Muslim, participate in World Hijab Day, and see what their experiences are like. Say Muslim Yasmine Ison: “Wearing the hijab [gives] me this whole other freedom that I never had. I started to notice this control I had of myself.” Photo above by Noelle Serper.