UMANDA WEERASINGHE (Non-Muslim): My friends, a lot of my friends, are Muslim, and I admire that they’re wearing the scarf.

SOFIA AMIR (Muslim): I’m a very religious Muslim. I wear it every day, throughout my day. I actually started wearing it as soon as I started college. When she told me that, you know, she’s going to wear the headscarf for a day, I thought that it would be impossible. 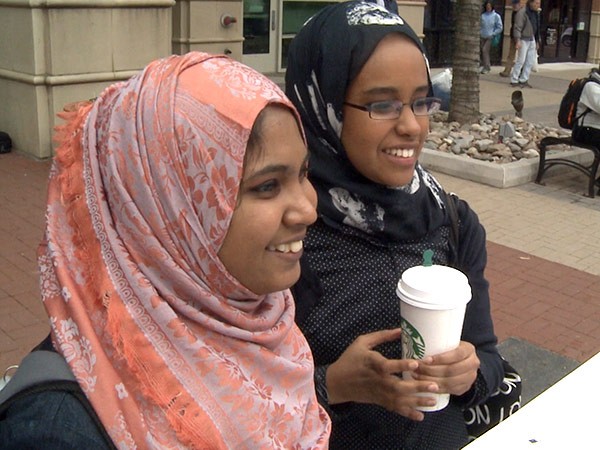 WEERASINGHE: I remember looking it up online for February 1st and I was, like, I’m definitely doing this! So my religious background is actually Buddhist. So my mom and my dad are both Buddhist. My entire family is. We also pray to Hindu gods as well. I have not worn a hijab previously, so this would be my first time wearing it.

AMIR: I actually, like, gave her my scarf. I let her borrow it and she loved it!

WEERASINGHE: She needed to help me assemble it, because if I was going to wear a scarf, it would just be, like—and they do it so precisely. They wrap it around once. They make sure it’s neat, then wrap it around again and pin it. So it kept coming off, and she helped me wear it. It’s interesting to just walk around, and it’s weird because you don’t feel the breeze on your hair. You don’t feel cold. But it’s nice to just wear it, and people will look at you, and you’ll just smile. They won’t even know if you’re Muslim or not, because they’re not sure of you. A lot of people looked at me like, “Oh wow, nice scarf.” Going around, it just felt so natural to look at other people and just act like it was a normal day. By wearing a scarf, it’s like, “Umanda, you know, you’ve become a totally different person,” because it doesn’t look like me. Your hair shows a different side of you. Covering it, it can either make your self-esteem low or make your self-esteem high, and for me, it just made me feel more confident. A headscarf isn’t meant to hurt you; it’s what’s meant to protect you. You’re modest in the sense of God looking at you, but you’re modest to other people as well. You don’t let them see a side of you that most people generally see every day. I’m happy with my own faith. I think Islam has its own rules and what people practice, and I admire the religion. I can get a good perspective and outlook on it, but I do like my faith. I like my faith in the sense that it gives me the freedom to do what I want to do. It allows me to even wear the hijab without feeling controversial. My culture is very open. My religion is very open, and it’s, like, if you have to explore new possibilities to get a new perspective, then do it.

AMIR: I asked her, “What is the reaction? How did you feel?” And she said, “No, it’s really normal.”

WEERASINGHE: I like the scarf. I just—it feels so natural, and I don’t know why it does. I just—I feel like it’s me.

Two young women, one Buddhist and one Muslim, help to foster religious tolerance and greater understanding by supporting an annual event on February 1 when non-Muslim women are invited to “experience the hijab” for one day.