Hillary Clinton (speaking at Democratic National Convention): "And so, my friends, it is with humility, determination, and boundless confidence in America's promise that I accept your nomination as president of the United States of America." 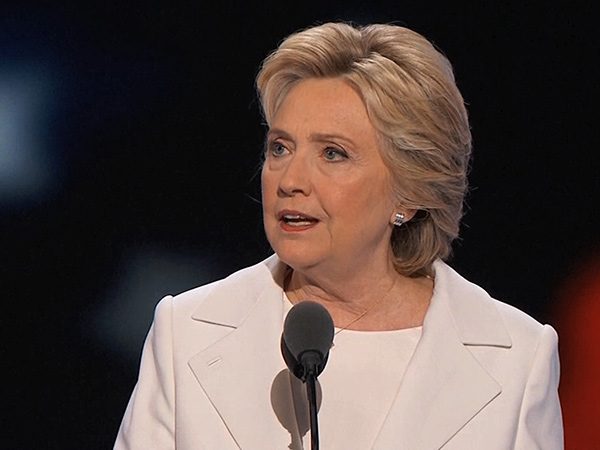 KIM LAWTON, correspondent: As Hillary Clinton became the first woman to accept a major party’s nomination for US president, faith leaders were among those moved by the historical significance of the moment.

SISTER SIMONE CAMPBELL, Nuns on the Bus: That this day has come is a tribute to all the women that went before us.

LAWTON: Sister Simone Campbell is leader of the NETWORK Lobby’s Nuns on the Bus project, a group of Catholic sisters who traveled, by bus, to both conventions advocating for economic justice. Here in Philadelphia, they got permission to park their bus inside the security perimeter next to the convention arena. In both cities, they pulled wagons through the streets passing out lemonade and initiating conversations about key issues.

CAMPBELL: The income and wealth disparity in our nation that's tearing us apart, the anger, the fear, the judgmentalness, the racism that we've seen in our country--It's tearing holes in the fabric of our society. Can we step together into a future, as opposed to pulling apart for partisan gain?

LAWTON: The nuns were part of the large number of religious representatives who came to Philadelphia this week to speak out for their values and beliefs. In recent decades, Democrats have battled the perception that they are not favorable toward religion. Democratic Convention Committee CEO Leah Daughtry, who is also a Protestant pastor, believes this convention will help shatter that idea. 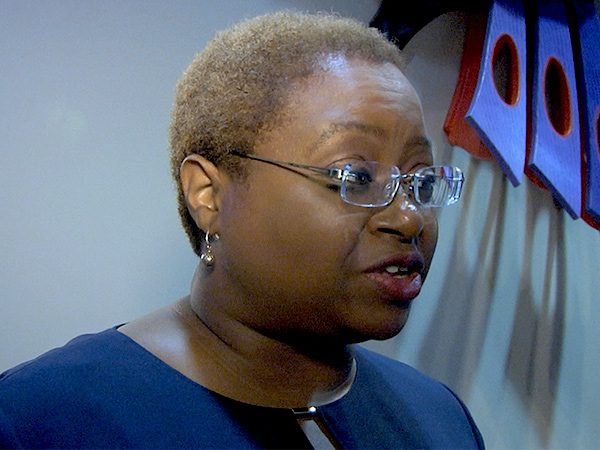 REV. LEAH DAUGHTRY, Democratic National Convention Committee: I'm a witness, an actual living witness along with so many millions of others that our faith is part of what drives us to the Democratic Party: the values of community, of sharing, of caring for one another and for lifting up everyone even those that are stuck at the bottom and those who are coasting along the top.

LAWTON: On Sunday, the convention organized an interfaith gathering, where representatives of several religions read from sacred texts and offered prayers and blessings. And there was some rousing Gospel music. During the week, the Democratic Faith Council held special panel discussions about religion and politics. Reverend Derrick Harkins of Union Theological Seminary in New York led Faith Outreach for the DNC in the last election. He says Democrats are continuing to do a better job connecting with their religious constituencies.

REV. DERRICK HARKINS, Union Theological Seminary: There are particular relationships that we really do need to foster and care for in terms of with faith communities and faith leaders. And I think we are on the way but I think there’s definitely room for added emphasis.

LAWTON: As is traditional for both parties, every session of the convention opened and closed with prayers from a diverse range of religious leaders. During his speech on Wednesday, vice-presidential nominee Tim Kaine hit many spiritual themes and spoke extensively about the importance of his Roman Catholic faith and his missionary work in Central America. Many faith-based delegates were pleased by his addition to the ticket.

ANDREW BARNHILL, North Carolina Delegate: He's someone that has really made his message be clear about how as a Catholic he understands the political process and understands that that has guided him into politics.

LAWTON: Clinton is a lifelong United Methodist. In her acceptance speech Thursday, she quoted a well-known Methodist motto she often repeats:

Hillary Clinton: “Do all the good you can, for all the people you can, in all the ways you can, as long as ever you can.”

LAWTON: Many Democrats have been urging Clinton to talk more about her faith. 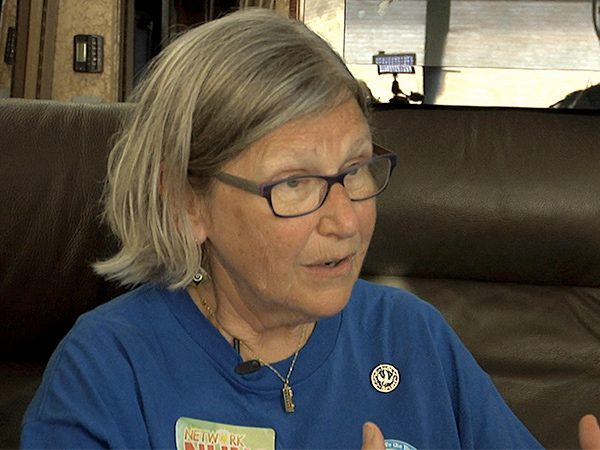 CAMPBELL: Hillary Clinton is a great Methodist. And they don't talk about it. That's the irony of this. She really does live her faith. But, her faith, even more than a Catholic, calls her to be quiet, reserved. But to be integrated in it. And I think we see it in her values. And that's what we've got to look at.

LAWTON: One of Clinton’s closest spiritual influences is senior advisor Burns Strider, a Baptist. He shares what he calls a “daily time of devotion and reflection” with her. They focus on a passage from the Bible or a spiritual book.

BURNS STRIDER, Clinton Senior Advisor: It can be daunting at times. Her questions are always deep if she has one, but so are her insights.

LAWTON: Strider says he sees Clinton’s faith reflected in her care for others. He told me about one recent campaign stop where some veterans’ families approached the candidate for help. She directed Strider to make a file and then kept following up.

STRIDER: I’m trying to elect a president and she has me doing case work. And that’s the president that will be sitting in the Oval Office. She has the capacity to work on the big pictures and see the personal needs. She lives her public life in the macro and the micro. 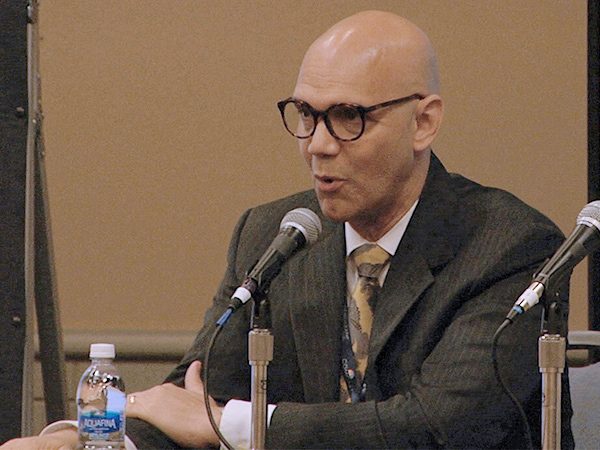 LAWTON: Americans have long said they want a president with strong religious beliefs. But the numbers are dropping. In a new Pew survey, 62 percent of all Americans said it is important to them. That’s down from more than 70 percent in 2008. And among Democrats, just over half said it’s important to them. People who describe themselves as having no particular religion make up one of the fastest-growing Democratic voting blocs. In the last election, about one in four Obama voters was religiously-unaffiliated. It can be tricky reaching out to those voters while not alienating religious blocs. Many here said the faith community cannot be taken for granted.

HARKINS: Mobilization is key, critical and crucial. And mobilization often times happens incredibly well as it emanates out of faith communities, certainly in the black church, often times the nexus of a neighborhood, of a community. So mobilizing people to get to the polls so that they can exercise their franchise. We have got to make that a priority this time around. The stakes are just so high.

LAWTON: While religious liberals praised the progressive party platform adopted here, some Democratic delegates expressed concern that other positions on social issues were not recognized. The group Democrats for Life is urging its party to be more inclusive of what it calls a “whole life” view that opposes both the death penalty and abortion. 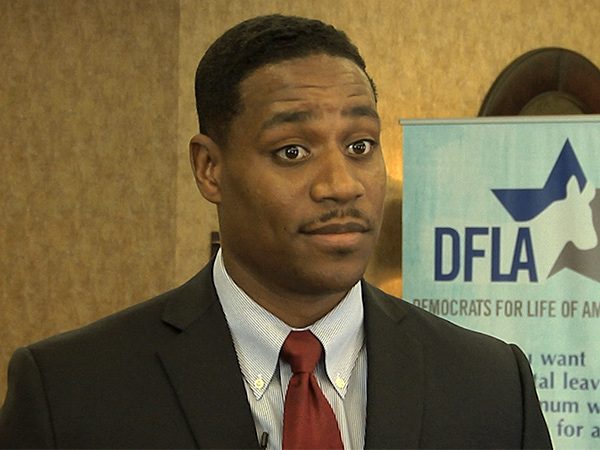 JUSTIN GIBONEY, Georgia Delegate: It’s time for urban Christians, it’s time for Christians in general, to say, ‘Hold up, we’re part of this party too. You need to hear how we feel on this issue and really give us your ear.’

LAWTON: Other groups also feel some tension in the party. Former president Bill Clinton tried to reach out to Muslims in his speech, but ended up insulting some when he said, quote “if you’re a Muslim and you love America and freedom and you hate terror,” we want you. Some Muslims felt that implied their love of America and opposition to terror should be questioned. First time Florida delegate Ghazala Salam admits her party still has some work to do.

LAWTON: Salam says Donald Trump’s rhetoric, including his calls for a ban on Muslims traveling to the US, has mobilized a record number of Muslims to get involved in politics. 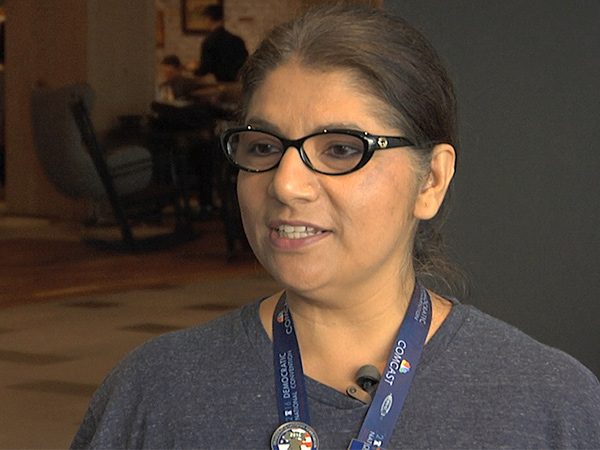 SALAM: 2016 is a wakeup call for the Muslim community who has been here for so long to say we need to be more be more proactive so that next election cycle, or the next major candidate that comes along does not use us in the way that we're being used to create hate and fear.

LAWTON: At an interfaith prayer breakfast, participants discussed how to challenge anti-Muslim rhetoric and work for the common good. Throughout the campaign season, many religious groups have been raising alarms about the level of negative rhetoric by candidates and their supporters.

RABBI JASON KIMELMAN-BLOCK, Bend the Arc Jewish Action: We're at a point where – I'll just say it – one of the candidates, Donald Trump, is running a campaign of division. Where he's actively trying to exploit the divisions within the country and tapping into people's fear.

CHRISTINA FORRESTER, Christian Democrats of America: Hate is not a Christian value. And if you are a Christian, then your commitment should be about what did Jesus preach? And it was love. It was compassion, it was love for everybody. It was a message of tolerance and of accepting people.

LAWTON: The American Jewish Committee was one of several groups that held issue briefings at both conventions. The AJC’s Jason Issacson said he worries about the international impact of the current negative political atmosphere. 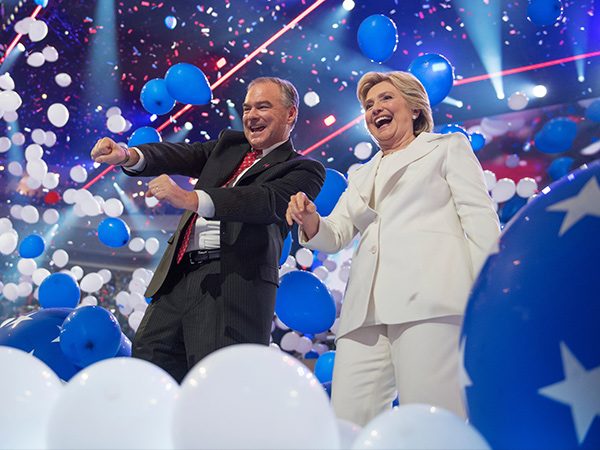 LAWTON: Still, many religious leaders here urged Americans not to give up on hope.

CAMPBELL, Nuns on the Bus: As long as we think the current reality is the given, we won't be able to move forward. So, I'm encouraging people to stand up, be the leaders we're waiting for, and work for change.

LAWTON: And whether Americans ultimately see the Clinton-Kaine ticket as an agent for positive change may help determine the outcome in November. I’m Kim Lawton in Philadelphia.

Managing editor Kim Lawton has a special report from this week’s Democratic National Convention in Philadelphia, where she spoke to religiously motivated delegates and religious groups who have been actively seeking attention for their key issues. Kim also spoke to Hillary Clinton advisors about Clinton’s personal faith and to Democratic strategists about the challenges of reaching out to faith-based voters.