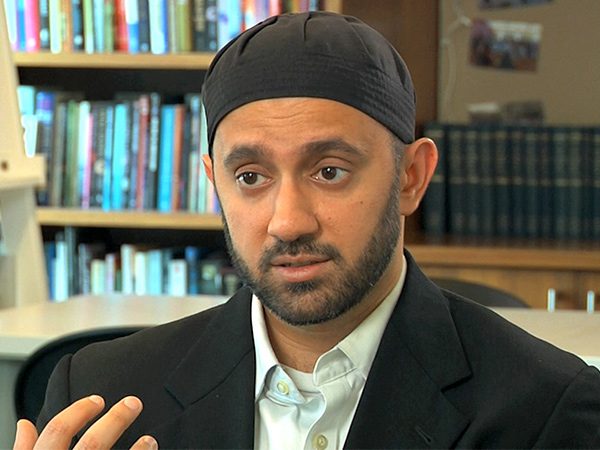 KIM LAWTON, correspondent: Like many Americans, New York University chaplains Imam Khalid Latif and Rabbi Yehuda Sarna remember exactly where they were on that morning fifteen years ago.

LAWTON: Latif was a sophomore and had just arrived for Arabic class when a security guard came and told the students to evacuate. They went to nearby Washington Square Park, where thousands had gathered to watch the fire at the World Trade Center.

LATIF: There was a lot of noise, a lot of commotion. People were trying to figure out what was going on. And all of the sudden we were hit by this very heavy silence as we watched the second plane fly into the towers. It felt like an eternity but was really just seconds.

LAWTON: Sarna was also in New York, at the library of Yeshiva University, when the towers fell. 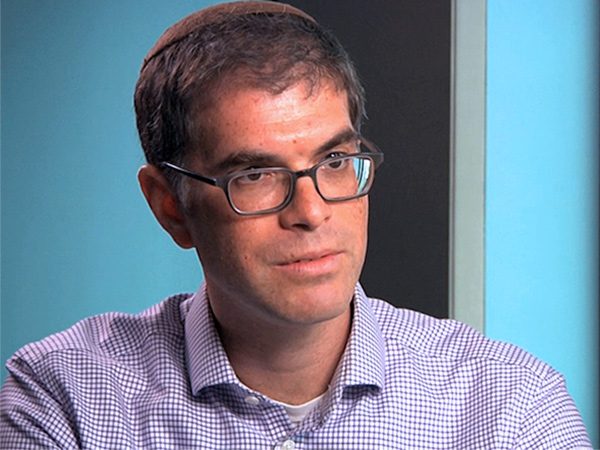 RABBI YEHUDA SARNA (New York University): I was in rabbinical school at Yeshiva University doing my internship at a synagogue in Riverdale. The senior rabbi of the congregation, Rabbi Avi Weiss, w as known to try to bring healing to places and situations of great distress.

LAWTON: Weiss went to the Ground Zero area. He invited Sarna to come with him.

SARNA: I watched as he went over to the people who looked the most despondent…tired…grieving, and he just hugged them. And he said, “I’m here, I am a Rabbi, and I’m just here to say God bless you.”

SARNA: That was the moment that I received my ordination. It’s about human connection. So I would say 9/11, or that time for me was very foundational for what I see as my life’s mission.

LAWTON: Latif says the events of 9/11 were pivotal in shaping his mission as well. In the aftermath of the attacks, he and other Muslims felt a backlash of blame.

LATIF: My father said, you know, we’d be more comfortable if you didn’t cover your head anymore, you weren’t visibly identifiable as a Muslim. I didn’t understand why at a time when people had so many questions, many of us were taking steps back to not answer their questions.

LAWTON: He says that support friends of other faiths gave him the courage to speak out about his Muslim beliefs.

LATIF: I, along with many of my classmates at that time, we just made a decision to be more proactive, to tell people, this is what we believe in, this is who we are, this is what our values actually are. 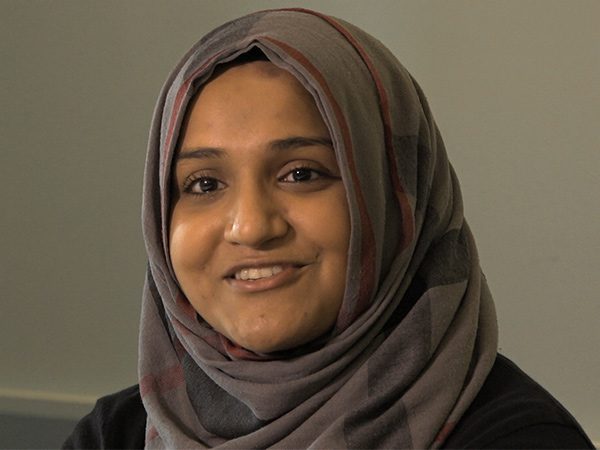 LAWTON: Today, Latif and Sarna are leaders at NYU’s Global Center for Academic and Spiritual Life, which has become a national model for university interfaith programs.

SANA MAYAT (Student): My community was very much in their own Muslim bubble, so everyone I was interacting with was definitely Muslim. But interacting with people from different faiths, I never really did that.

LAWTON: At NYU, Students are encouraged to attend each other’s religious services in projects like the Muslim/Jewish Jum’ah/Shabbat Experience. Senior Sana Mayat says that has enhanced her own Islamic practice.

MAYAT: And I really love the concept of Shabbat, I really like the idea of it, it’s a really beautiful thing to disconnect, tune everything out and really center yourself in what is important. I pray five times a day, that’s five times a day that I’m supposed to tune everything out and really concentrate on prayer and God and what’s important but how invested am I in that, that I’m still not thinking about that text message I got on my phone, that email I have to send.

LAWTON: There are interfaith clubs to foster dialogue. And there are joint service projects, such as when students of different religious backgrounds came together to help rebuild homes after Hurricane Katrina and after recent tornados.

SARNA: What we’ve found is those kinds of disasters just don’t knock down homes, but they can break down barriers and the experience of acting out on a shared value really bonds people. 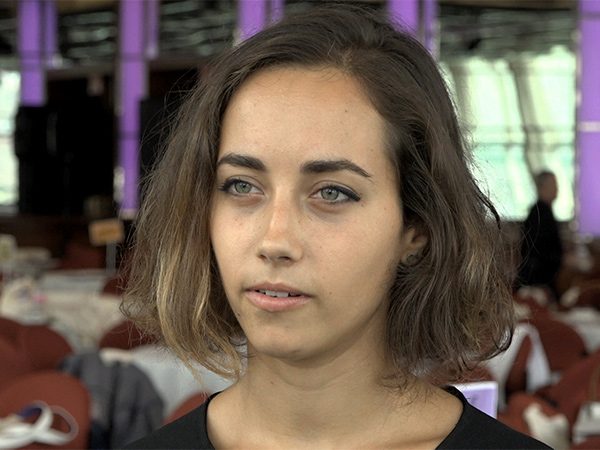 GAVRIELLA RUBIN (Student): When you’re sitting and painting a wall for 10 hours, you’re going to talk to the person next to you. And you have a common goal and a common mission, and you get to ask questions, and you just relate to people as people.

LAWTON: The leaders say they are trying to promote a new vision of interfaith relations.

LATIF: Interfaith interaction today can’t be what many of us have done with it in the past, where it’s just a panel discussion, people getting up on a stage talking about similarities for an hour and then everybody goes back to their own homes.

SARNA: We are concerned not about what’s said in the books, but what people are saying in the street. And therefore, the kind of engagement we are looking for is very much personal. Face to face. 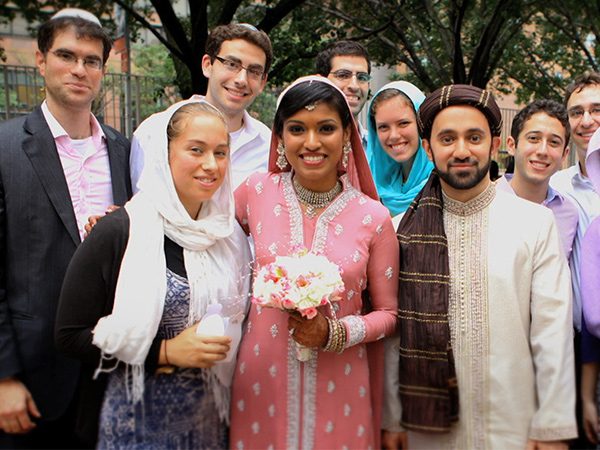 LAWTON: The two men model that in their own close personal friendship. When Latif got married five years ago, it was on the Jewish Sabbath, so Sarna, who is an Orthodox Jew, walked more than 80 blocks to be there. Today, they live with their families in the same building.

SARNA: Our wives are friends, our children are friends. We at one point even shared a nanny. And our kids, my children, don’t know anything different.

SARNA: You can be deeply embedded and enriched by a religious community and still be excited about collaborating with people who are of a different faith community.

ARIF KHALIL (Student): Muslims love Khalid and the Jewish community loves Rabbi Sarna, so when you see the two people we love most coming together, it just opens up an opportunity for everyone else. 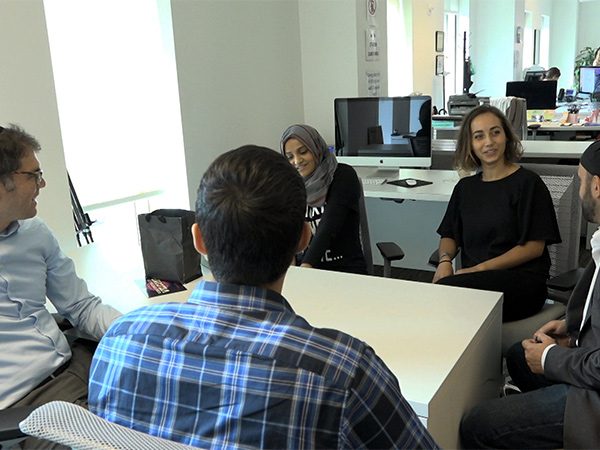 MAYAT: They embody everything the student groups are trying to do.

LAWTON: Latif and Sarna believe having strong relationships makes it possible to confront difficult issues, such as religion and terrorism or the Israeli Palestinian conflict.

LAWTON: In their work, Latif and Sarna say the lessons of 9/11 are still very evident. Last year, during Pope Francis’ visit to the US, Latif helped lead the interfaith service at the 9/11 Memorial.

LATIF (speaking at service): Through our knowing of each other today, let us move beyond a mere toleration of our differences and work towards a much-needed celebration of them.

LAWTON: Fifteen years after 9/11, both leaders say they are concerned that divisions and anti-religious bigotry seem to be on the rise in many areas.

SARNA: There is a return of the kind of hateful rhetoric that we thought we had buried. We thought it was over. It’s very sad. It’s scary, but for me it’s more sad than scary. 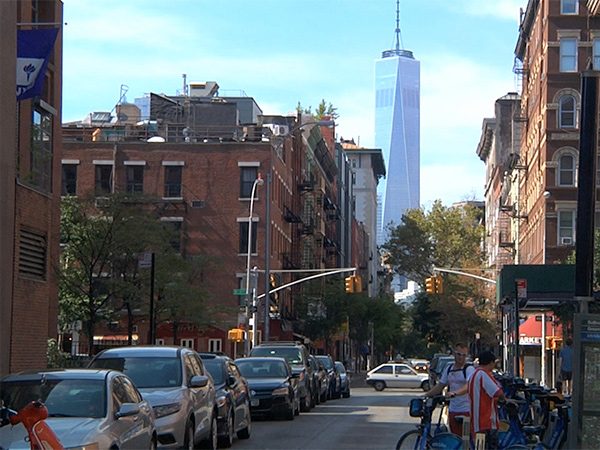 SARNA: There are so many young people who are raring to go. They want to do this.

LATIF: For many it’s like well, where do I start? And you know, your starting can just be with one other person. You might not impact a million people or ten million people but if you can bring good to just one individual, you can impact one heart. That could make all the difference.

LAWTON: And they say, that can bring hope to a world forever changed by 9/11. I’m Kim Lawton in New York.

New York University chaplains Imam Khalid Latif and Rabbi Yehuda Sarna were both students in New York on September 11, 2001. Both men say the events of that day profoundly shaped what would become their mission: interfaith engagement. Today, they help lead NYU’s Global Center for Academic and Spiritual Life, which has become a model for other universities. Correspondent Kim Lawton talks with the chaplains and some of their students about the lingering impact of 9/11 and a vision for interfaith relations based on friendship and human connection.

Beyond Tolerance: Searching for Interfaith Understanding in America

Interfaith Leaders: “Silence Is Not an Option”