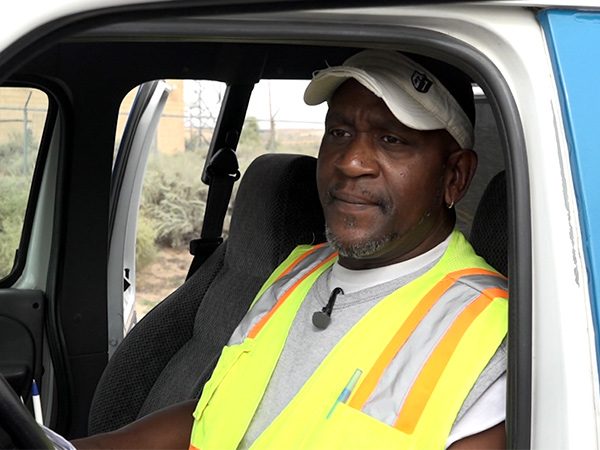 WILL COLE: If I had a business, a lot of these ladies and gentlemen that we help, I’d hire them in a second.

LUCKY SEVERSON, correspondent: Will Cole is a transplant from Chicago, now driving a van for the city of Albuquerque, out trolling for panhandlers. Those “ladies and gentlemen” he wants to help are often homeless—most by fate, some by design.

COLE: I don’t know, they kind of fall into a rut, kind of as far as this homeless thing, and it’s hard for them to get out of it. I think this program is like a little helpful push.

SEVERSON: This program, in its second year, is called There’s a Better Way, and it’s unlike most programs in the US today.

SEVERSON: Albuquerque is hiring the homeless. That’s Will Cole’s job. He’s a big guy, the kind you’d like on your side.

(Shouting out the van window): How you doing, sir? You want to go to work?

SEVERSON: At first he was searching out panhandlers only two days a week, but the budget has been increased, so now it’s four. His limit is six panhandlers each day. 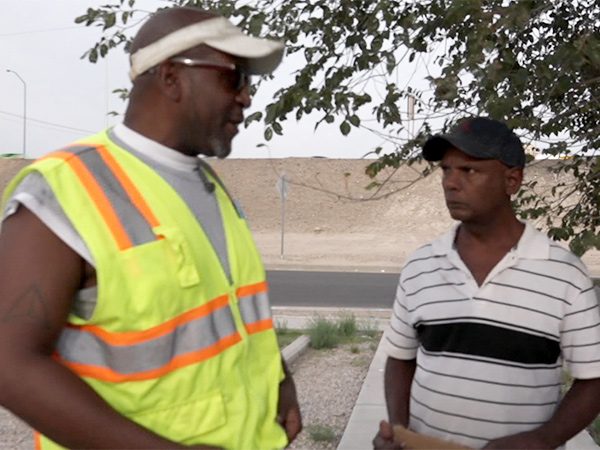 And you’re looking for work? You look cold.

You are cold because you were sleeping in the street last night?

You do that every night? 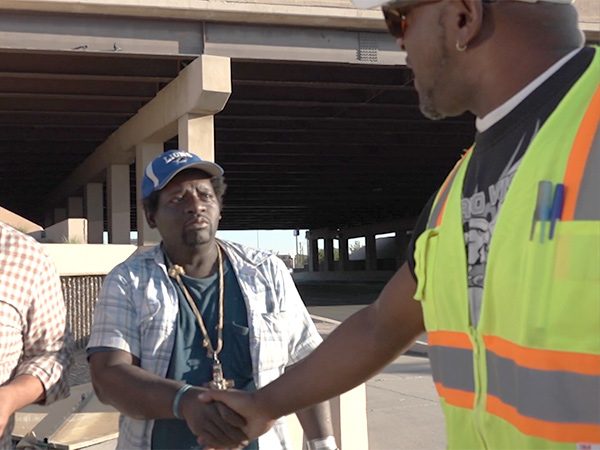 SEVERSON: Fidel, like the others, will earn $9.00 an hour, cash, and will work five hours.

Cole: Alright, we are ready to go then. That’ll make our six, and we can head for the work site and get started.

SEVERSON: It’s easy to spot the Better Way van. It’s towing its own Porta Potty. The work is usually not in the part of town that has restrooms. It’s nearer the streets and fields where the homeless, like John, reside.

JOHN: There’s a lot of dislike for us. We’re just, you know, worthless creatures who really shouldn’t be alive, you know.

SEVERSON: Living a panhandler’s life is not easy. This is Gabriella. (Speaking to Gabriella): Those nights must get long and dark when you are staying in your car. 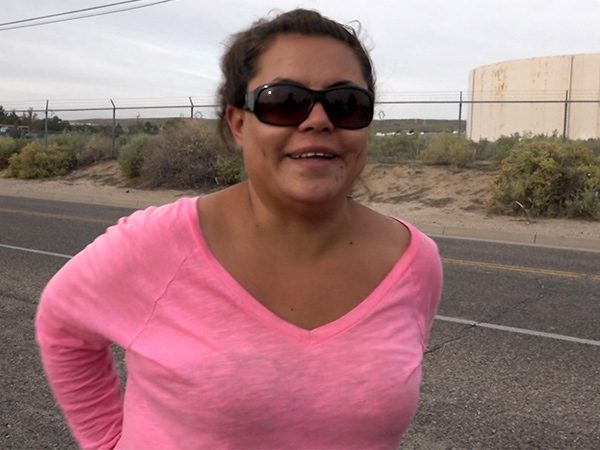 GABRIELLA: Uh huh… It’s something I’ll never forget, that’s for sure. And it’s humbling, so much. Like I’m so different now because of it. You know, like I don’t look at people the same anymore. Because you’re right, people are not nice, so...

SEVERSON: The trend throughout the US has been to criminalize homelessness. A 2014 report by the National Law Center on Homelessness and Poverty found the number of cities imposing fines and fees for lying down, sitting up, eating, sleeping, camping, and begging had increased sharply since 2011. The center also found at least 50 cities had made it a crime to even feed the homeless.

SUSAN SIMONS: As we grow as human beings we will discover that these are not criminals. These are people with problems that, God forbid, any one of us could be pushed over that edge at any moment.

SEVERSON: Susan Simons is the acting executive director of St. Martin’s Hospitality Center, a nonprofit that has long served the needs of the homeless. St. Martin’s was recruited by Mayor Richard Berry to run the Better Way. It was his idea. 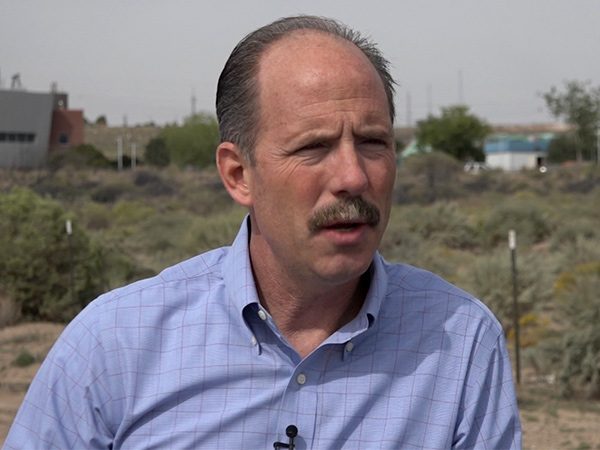 MAYOR RICHARD BERRY: And I said, listen. Prohibiting it is not ending it. It hasn’t to this point. It hasn’t in any country that—or any city that I know of. Why don’t we try something different? The man says he needs a job. Let’s give him a job.

SEVERSON: And so they did.

Cole: We’ll get a garbage truck over here. We only have a little time, so let’s get rolling.

How many people have you worked with, homeless?

Any of those found permanent work?

We have connected right around 120 of these individuals with some kind of permanent employment.

SEVERSON: What kind of grade would you give the city of Albuquerque for the way it’s handling homelessness.

SEVERSON: Jeremy Reynalds founded and runs the faith based homeless shelter called Joy Junction. It houses as many as 300 on any given night. He has been working with the homeless for most of his adult life. 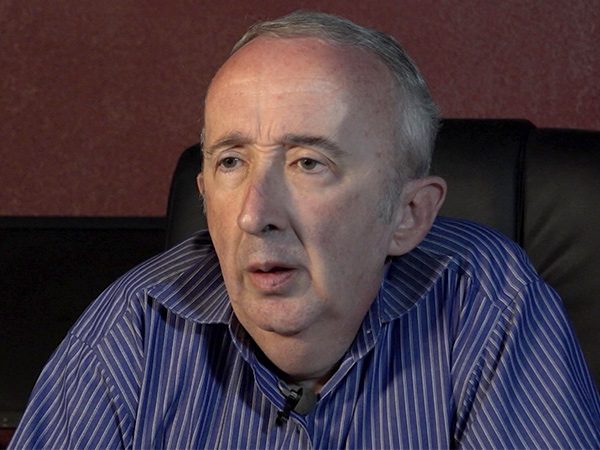 SEVERSON: He thinks the mayor’s program may, in fact, be attracting homeless which currently number anywhere from 1,200 to 8,000, if you include their children. It’s impossible to know for sure.

MAYOR BERRY: We don’t have any evidence we’re attracting with this program. I mean, this is hard work. This is shovels and rakes out in the hot sun.

REYNALDS: This program, again, totally fails to deal with or recognize or provide or offer to provide any answers to, again, people who are unable to work.

SEVERSON: Or don’t want to work, as is sometimes the case. Reynalds says many if not most homeless simply cannot handle a job, especially full-time work—that they need help for whatever mental or substance abuse issues they have, or they’ll stay homeless.

KELLY TILLERSON: At first glance it looks like we are trying to eliminate panhandling…. 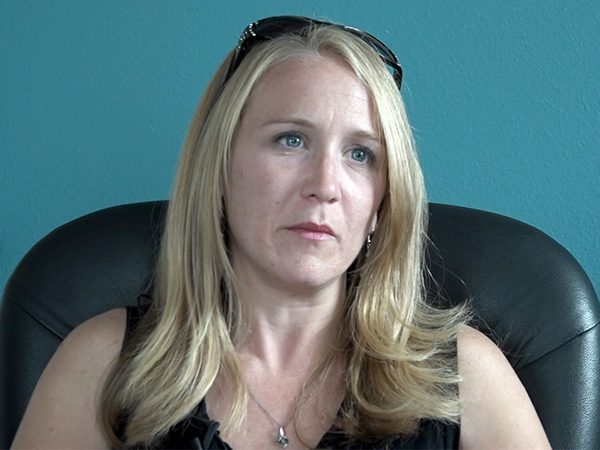 TILLERSON: That’s not the overall goal. The overall goal is to get people connected to services that they didn’t even know were available. We are doing that.

COLE: At lunchtime our employees come out from behavioral health from different departments and they talk to them and we try to direct them to those people so … they can get themselves together as best they can.

SEVERSON: In early 2014, Albuquerque police shot and killed an unarmed homeless man. Two officers were charged in the killing. That kind of incident is unlikely today in part because of the influence of the Better Way program. At least that’s the view of Kelly Tillerson.

TILLERSON: Since the mayor started this program, the Albuquerque Police Department has been briefed on what’s going on, and we’ve had them pull up in the police cruiser to drop people off at St. Martin’s, because they are in need of service. Rather than putting them in jail for a minor crime, they are now being connected to the services that will help them get out of that predicament. 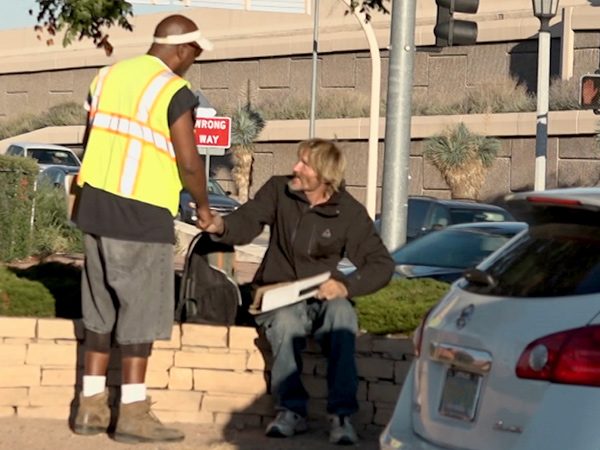 SEVERSON: Everyone agrees that the program works as well as it does because of Will Cole. He’s never been to college. One of seven kids, always had to work, and now he defends people who stand on the street corners begging against those who think panhandlers should be arrested.

COLE: I think you got two groups. You have the sympathetic group, and then you have the group that’s going to judge and yell at people on corners. And if those people—they’re wasting a lot of energy trying to complain about people and things like that. So maybe they should put that energy into trying to help out.

SEVERSON: One of the homeless is Joe. He says when he’s back on his feet he has learned to be more compassionate to people in need.

JOE: Since I’ve been homeless, and I see somebody else that’s homeless, that don’t have no pair of pants or socks or anything, and I’ll have it, I’ll give it them, you know, or water or food, you know. That’s just the way I feel.

MAYOR BERRY: If you follow these crews around, this isn’t Easy Street here. You know, we’re asking people to work hard.

SEVERSON: At the end of the five-hour day, they collect $45 in cash that they can spend any way they choose. Some intend to get a room for the night and a shower. Most, like John, say they will jump in the van again. 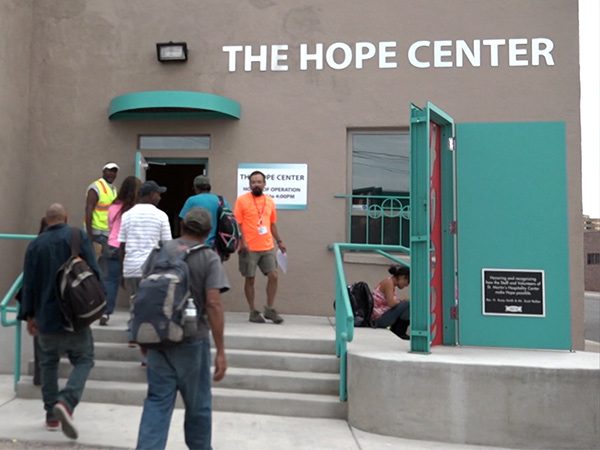 COLE: I hope that we can continue to do it. I think that’s the biggest thing as far as I’m concerned, that it can continue, because some programs—a lot of time you see programs come and go. Hopefully, we can keep this going.

SEVERSON: For now at least, the people of Albuquerque seem to feel more comfortable hiring the homeless than arresting them.

While many cities in the U.S. have moved to criminalize homelessness, imposing fees for lying down, camping and begging, Albuquerque, New Mexico has taken a different approach. It has initiated a program it calls There’s a Better Way, picking up homeless individuals and transporting them to jobs that pay them in cash at the end of a five-hour work period. As correspondent Lucky Severson reports, the program is now in its second year and Mayor Richard Berry is confident it works. But some critics think the mayor’s approach has created an increase in the number of panhandlers and homeless.