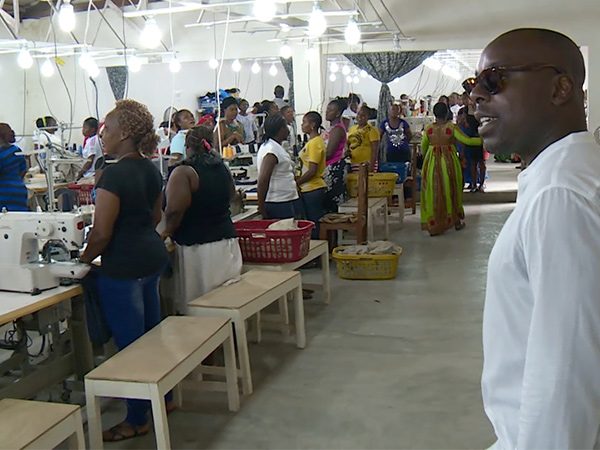 FRED DE SAM LAZARO, correspondent: Every morning, nearly 100 women at this garment factory in Monrovia begin their workday with song. “Liberian women, wake up” they sing. “You are the leaders of the nation.” Most of them grew up in nearby slums. Many had no formal education. And yet now they have become leaders in their communities and part-owners of this factory.

The man who built the factory is Chid Liberty, a social entrepreneur who was born in Liberia, the son of a diplomat, whose family sought asylum in the US during the 14-year long civil war. Liberty was raised in Wisconsin, became an American citizen, and was working in Silicon Valley living the American dream, he says, when he had a revelation.

CHID LIBERTY: I was living in the Bay Area. I had a nice salary. I had a very expensive foreign car. I had everything you think that a twenty-some-year-old kid would want. But I realized that without going back to Liberia I’d never really know who I am truly as a person.

DE SAM LAZARO: Liberty returned to a country which had been devastated by the war. Nearly two-thirds of the population lived in poverty. More than half of all adults were illiterate. Although the country exported iron-ore, rubber, and diamonds, those industries didn’t create many jobs. 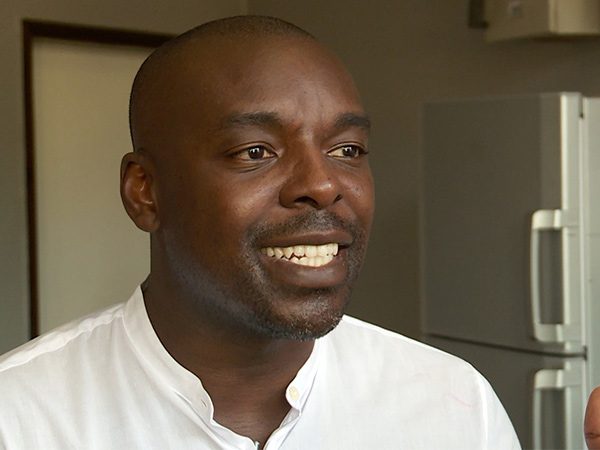 LIBERTY: We had massive unemployment and nobody who was actually manufacturing anything here for local consumption or export. To me that was crazy. How can we expect to pull so many people out of poverty if we’re not actually making something? If we’re not adding value to something? I looked to countries that have done it in a really amazing way in Asia and said I feel like this is Africa’s time to do this.

DE SAM LAZARO: He decided to build a fair-trade garment factory paying women competitive wages. He went looking for US investors with this pitch:

LIBERTY: Hey, I want to go and do this ground-breaking, world-changing thing that could help plant the seed on a continent for apparel manufacturing and grow it in a sustainable way and change an entire industry. I would go in there with that pitch, and everybody would look at me and say, “Manufacturing in not just Africa, but in Liberia? Are you crazy? Don’t let the door hit you on the way out.”

DE SAM LAZARO: Did you have any self-doubt, that maybe this was indeed a very silly idea?

LIBERTY: What I knew was that I could believe in is the people in Liberia. 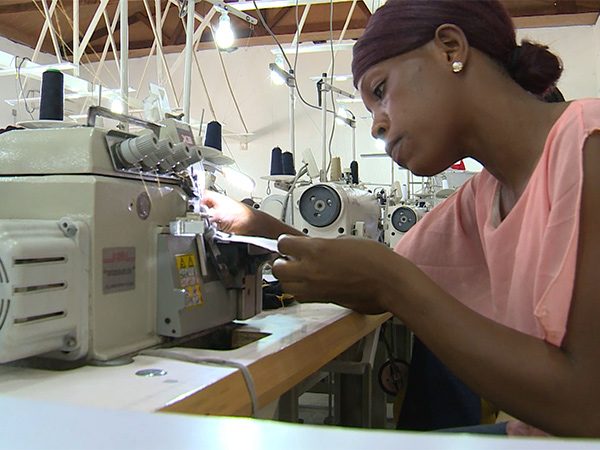 DE SAM LAZARO: Liberty eventually scraped together $200,000 from socially-minded investors—enough money to buy 30 sewing machines and hire 30 women to work in his aunt’s basement. They started by sewing simple things: T-shirts and tote-bags, which were sold locally. Four years of aggressive door-knocking finally yielded a jumbo prize: a multi-million dollar order from the trouser-maker Haggar. A new building, new machines, and 300 workers were hired. And then the news got even better:

LIBERTY: We had a second company that was going to come in on the same program. When this was all done, it would have been about $40 million a year that we would be making from these two companies. We thought it was a pretty great business, as did our investors and everybody else.

DE SAM LAZARO: And then, this: 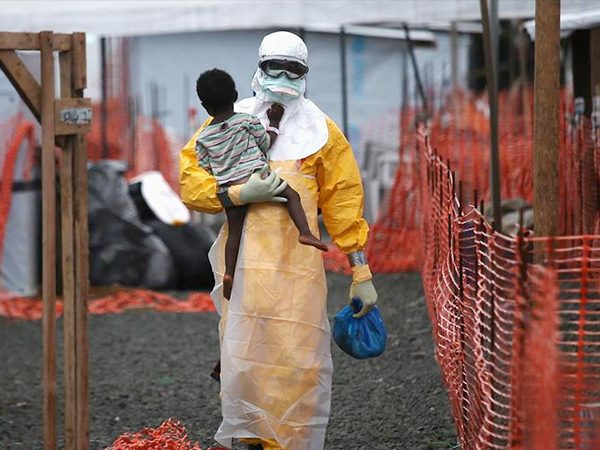 Ebola. Seventy percent of this factory’s employees lived in Westpoint, the neighborhood that was ground zero for the deadly virus. Liberty made sure his employees were fully informed about precautions to take. Still, he was forced to suspend operations. Thankfully, not a single employee died.

LIBERTY: We do believe that giving them access to some type of good information was one of the reasons we luckily avoided any tragedy.

DE SAM LAZARO: That was on the health front. On the business side?

LIBERTY: On the business side we went to zero. We lost all of our contracts. We didn’t deliver in time.

DE SAM LAZARO: When it finally looked like the crisis was over, he tried to win back his customers.

LIBERTY: I would call people and say, “Hey, I think the outbreak’s almost over. Do you want to come back to Liberia?” They’d say, “No, son. There’s no way we’re coming with you.”

DE SAM LAZARO: Stuck with a factory full of fabric and idled employees, Liberty got an idea: why not make school uniforms, required for all students across Africa and which parents often cannot afford? 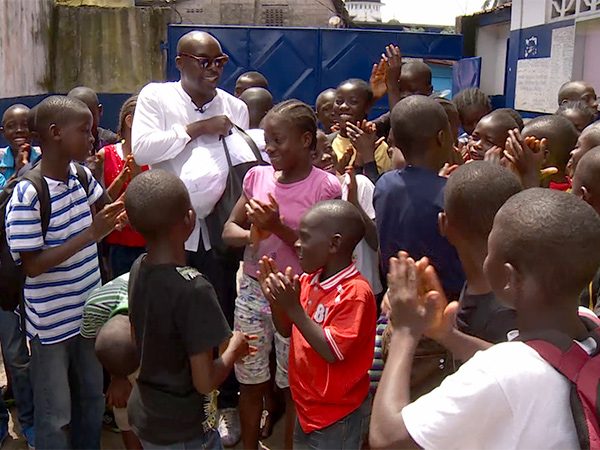 LIBERTY: We knew that education was a really big problem. Kids were out of school for a year. We had a factory which needed to go back to work. We had a lot of material which needed to be consumed into something. The one thing I could contribute was a uniform. Of course, the women broke out cheering. You can see they’re very religious, both Christian and Muslim. They loved the idea of doing this grand act of generosity.

DE SAM LAZARO: To pay the workers who would sew and donate the uniforms, Liberty launched a Kickstarter campaign selling T-shirts. He raised $230,000 in just over a month. That caught the attention of the Manhattan retailer Bloomingdale’s, which invited him to start his own clothing line. He called it, appropriately enough, Uniform. It includes basic T-shirts, pants, and jackets, and they’re marketed as socially-minded products. With each sale of a garment in the US, money is donated to the uniform project in Liberia. We went with him recently as he delivered t-shirts to the Monrovia football academy. So far, he’s been able to donate 8,000 uniforms to schools across Liberia.

Chid Liberty says he never thought he’d be in the fashion business. But now he says he’s happy not to have to depend on other clients.

LIBERTY: I really thought that there’s no way we could do it on our own. But it’s been amazing to see our own brand and lead with generosity and help with kids in school. And that’s what ended up making the factory successful. 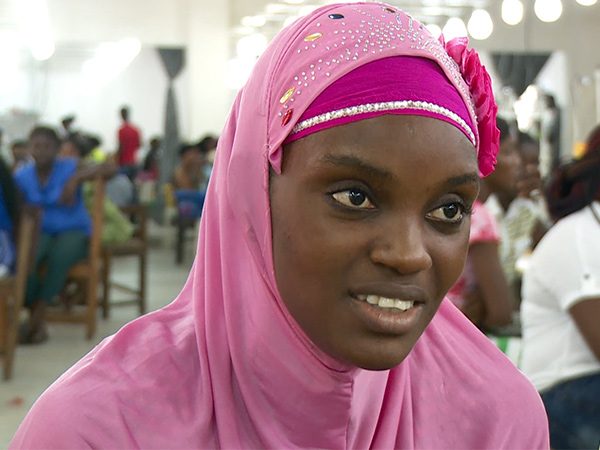 DE SAM LAZARO: The women seem happy, too. They make more money than average civil servants and receive health care and even basic literacy coursework. School was not an option for many of them during the war.

So you heard there was a job here, and you came here?

DE SAM LAZARO: How long would you like to be here?

LEONA MONGU: Doing this job has helped me provide for my children and sending them to school. I find joy in working here.

DE SAM LAZARO: Liberty is able to pay higher wages and keep his prices competitive with Asian factories because his garments can be imported duty-free to the US, thanks to a special law designed to encourage trade with and exports from African nations. There remain huge hurdles: the lack of adequate roads, ports, power, and bureaucratic corruption. But Chid Liberty says all those worries stop at the factory door. 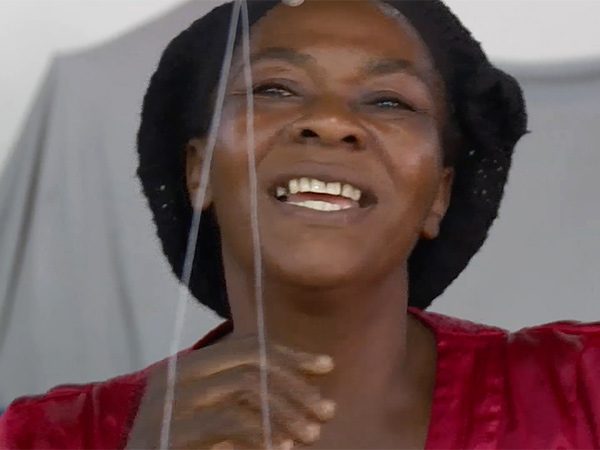 LIBERTY: For me, almost from a more spiritual level, it’s been so amazing to watch people have the dignity of a job. So much so that at times when we shut down because of Ebola and kept telling them don’t come they still came. They came in. They just wanted to belong to something. It meant something to them. You know, they own half of this factory. They see each other as family, and they belong to each other.

DE SAM LAZARO: It’s a tiny effort in a country in desperate need of hundreds more, but a prototype, he says, of what Africa needs: decent jobs making African products from African resources—in Africa.

In Liberia, a country still recovering from civil war and the ebola crisis, most people remain in poverty, partly because the economy has been largely dependent on exporting raw materials, not finished products. But a creative American is changing that. His name is Chid Liberty, born in Liberia and raised in Wisconsin.  He says he was happy in the US until he felt a call to go back to Liberia and start a sustainable, fair-trade company that pays local women competitive wages and gives them the dignity of a job. Correspondent Fred de Sam Lazaro reports on this social entrepreneur’s successes, in spite of Liberia’s many problems. “I realized,” says Liberty, “that without going back to Liberia I would never really know who I am.” Today Chid Liberty is in the fashion business, manufacturing school uniforms for the children of Liberia and a retail clothing line called Uniform, and giving Africa what it needs: decent jobs making products from African resources—in Africa.