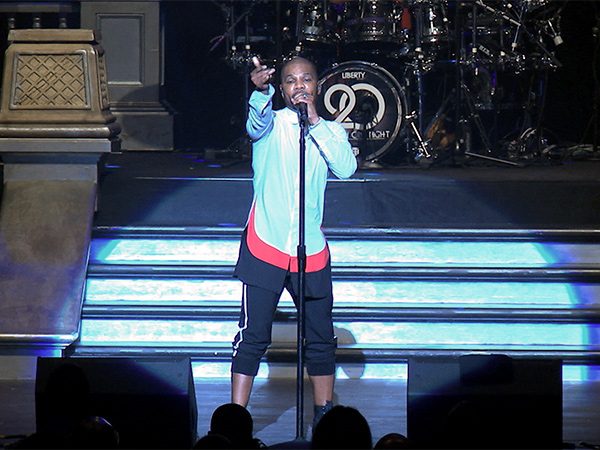 KIM LAWTON, correspondent: For more than two decades, Kirk Franklin has been revolutionizing gospel music. He was a trail-blazer in blending gospel, R&B, rap, pop, and hip-hop. And he’s one of only a small number of Christian artists to have successfully crossed over into the mainstream. Now 46, Franklin tries to keep that mainstream success in perspective.

KIRK FRANKLIN: I’m there for a specific purpose, so if that door opens, and it’s for the agenda of making God famous, it’s cool. But if I’m going over there so Kirk Franklin could blow up, I will fail every time.

LAWTON: Throughout his career, Franklin has done his part to “make God famous.” He has sold more than 10 million albums and received 10 Grammys and more than 40 Stellar Awards. His eleventh album, called “Losing my Religion,” was released last November. Franklin says the inspiration for it was his belief that the rules and sometimes judgmental nature of religion can too often prevent people from having a relationship with God. 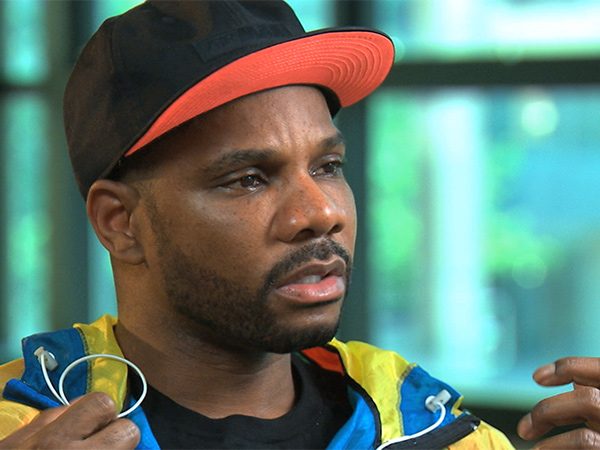 FRANKLIN: Seeing church decline in America, church attendance among millennials decline, the lack of impact and influence we have in the culture, and the lack of voice we have in just being relevant to the times. And I believe a lot of that has been silenced by religion. The idea of God being a loving father who won’t stop pursuing you until he wins you back is very foreign to them.

LAWTON: One of “Losing My Religion’s” hit singles, “Wanna Be Happy?” debuted at number one on the charts. It addresses issues including addiction, poverty, and domestic abuse, frequent themes in Franklin’s music. He believes Christian artists must always have something to say about what is happening around them.

FRANKLIN: The conversation about eternity and life and death and hurt and hope is all found in the narrative of God, and so we can still find cultural, swaggy ways to do be able to do that, and I don’t know if we’ve done a very good job in our genre. 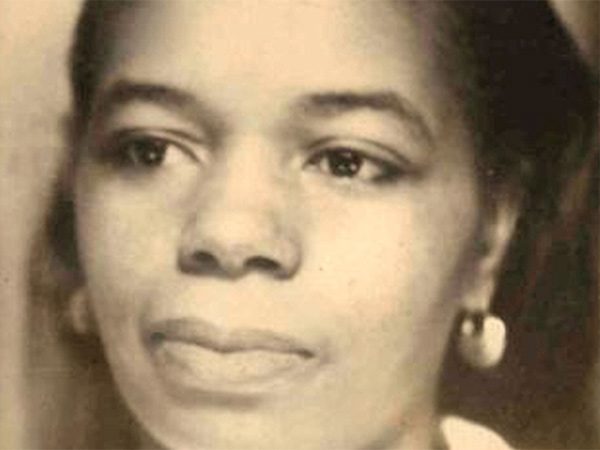 LAWTON: Franklin’s music often draws on his own life experiences. He never knew his father, and his mother abandoned him when he was a small boy. He was raised in Texas by an elderly aunt, Gertrude. She was a deeply religious Baptist who started him on piano lessons when he was four.

FRANKLIN: I was raised just with the piano. And so that piano and talking to God became very natural for me as a little bitty boy. I would jump on the roof at night and talk to him, sing songs to him, and cry and have this intimate dialogue. Nobody taught me how to do that. It became very natural for me as a young man to really have a very father-son relationship with God very quickly.

LAWTON: Franklin was active in church music from a young age. He wrote his first Christian song when he was 14. After a time of rebellion in his later teens, he came back to his faith and began recording songs. In 1993, he released an album, “Kirk Franklin and The Family.” It spent 100 weeks on the gospel charts and became the first gospel album to go platinum.

DONNIE SIMPSON, DJ: You’ll be listening to his message on the dance floors with this one. This is “Stomp” on WPGC. 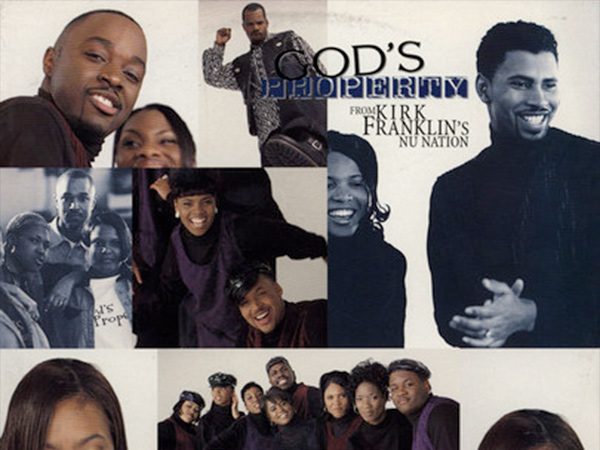 LAWTON: His 1997 album “God’s Property and Kirk Franklin” and its hit single “Stomp” exploded on the mainstream R&B and hip-hop charts and was played on secular radio stations. But Franklin also faced criticism from traditional church people who felt his urban style and energetic dancing were inappropriate with Christian music.

FRANKLIN: I’ve had rocks thrown at me since day one. My agenda and my modus operandi is always to keep that conversation alive of God. And so if it takes some rocks being hit, I’m cool.

LAWTON (to Franklin): How is music a spiritual endeavor for you?

FRANKLIN: I believe it’s the meal that allows me to sit at the table with God.

LAWTON: Today, Franklin has been embraced by mainstream evangelicalism. For several years, he performed at Billy Graham crusades. He says Graham had a strong impact on his life. 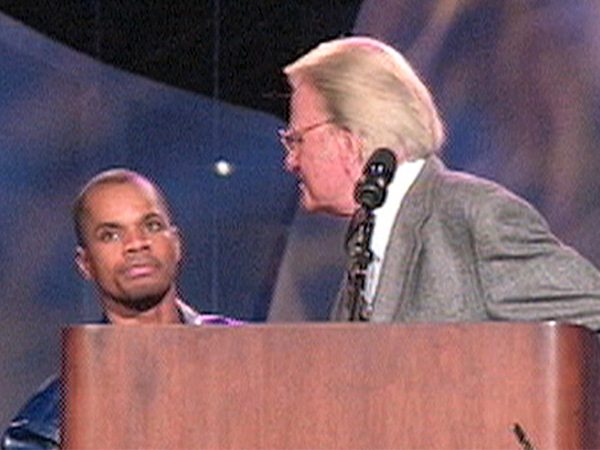 FRANKLIN: He was a dude that you saw walk it and talk it. That’s the type of integrity that you fight for; you want that type of integrity, faithfulness and loyalty, not only to the God that you believe but to the children and family that you have. And integrity is something that we’re missing a lot now in our leaders, right?

LAWTON: Despite the awards and accolades, Franklin speaks about his struggles with feelings of insecurity. He has also been candid about battling an addiction to pornography, which he says he overcame with God’s help.

LAWTON (to Franklin): Why did you feel that it was important to be that public about those kinds of things?

FRANKLIN: I enjoy talking about what I’ve gone through, because I heal as I reveal. I can impress you talking about Grammys and all that, but I can change you by telling you about how I felt when I lost them, right? I can really impact you when I talk about the depression and the fear and the doubt, when I didn’t know if I was good enough. I mean that hits a deeper core, right?

LAWTON: He says that deeper core enhances his music. 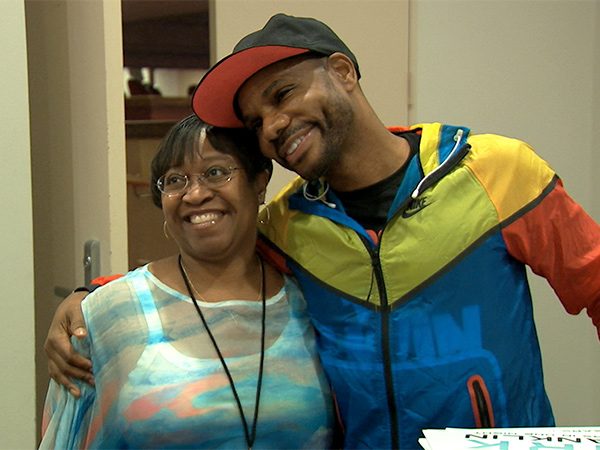 FRANKLIN: If I could take that and soak that to the melodies and the harmonies that you hear—when I write a song says “I want to believe, but I’m having a hard time seeing past what I see right now,” that’s a better conversation than 10 Grammys.

FRANKLIN: It better be. It better be, because I don’t want to hear a song about 10 Grammys. That stinks.

LAWTON: Franklin says he feels a great responsibility in using his position to help others. In 2010, after the devastating Haiti earthquake, Franklin brought together top gospel artists to record the benefit single “Are You Listening?”

LAWTON: He founded the Fo Yo Soul Record label with RCA Records to nurture emerging artists. Through all his ventures, Franklin says he hopes to have a positive impact.

FRANKLIN: These are shaky times, and people now are beginning to live looking over their shoulder, and I don’t like that. I don’t like seeing Americans walking around looking at the stock market every day, or looking at a Muslim man getting on the bus, or a white woman still clenching her purse. And I believe that the message of, not religion, but the hero, God the hero, the Savior that is still able to save the fears and hopes of man is what I want people to know. I’m praying and hoping maybe one thing that I’ve said, from somebody who came from nothing, could maybe still give just a little bit of hope that it can get better.

Music critics say during his more than 20-year-long career, Kirk Franklin has revolutionized gospel music, blending it with R&B, rap, pop, and hip-hop. He has received 10 Grammy awards and has sold more than 10 million albums. Correspondent Kim Lawton caught up with Franklin in Baltimore during his most recent concert tour, where they talked about his Christian faith and his desire to “make God famous.”