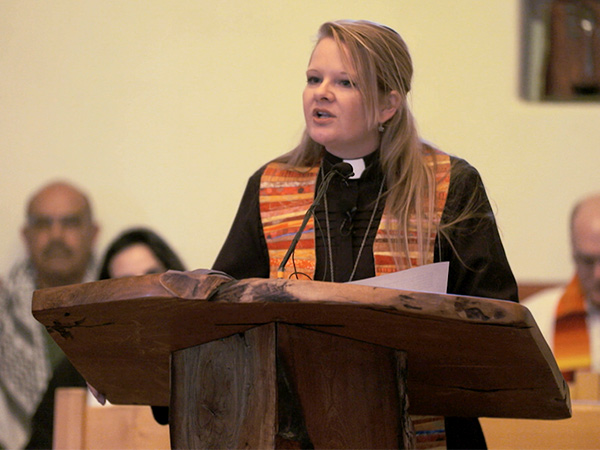 REV. ALISON HARRINGTON (Pastor, Southside Presbyterian Church): As people of faith and people of conscience we pledge to resist the newly elected administration’s policy proposals to target and deport millions of undocumented immigrants and discriminate against marginalized communities.

LUCKY SEVERSON, correspondent: Reverend Alison Harrington is the pastor of the Southside Presbyterian Church in Tucson, Arizona. About 20 congregations in this city about an hour’s drive from the border have pledged to offer their house of worship as a sanctuary. This is a response to what they perceive here as an all-out war against undocumented immigrants by President Trump.

PRESIDENT DONALD TRUMP: Beginning today, the United States of America gets back control of its borders, gets back its borders.

REV. HARRINGTON: The fear is palpable in our communities, but also so is the resolve to come together as a community to stand with one another and protect one another.

SEVERSON: Southside Presbyterian has considerable experience with the sanctuary movement. Rosa Robles Loreto, married mother of two boys, spent 461 days living at Southside after she was arrested on a minor traffic violation in 2010 and found to have an expired visa. 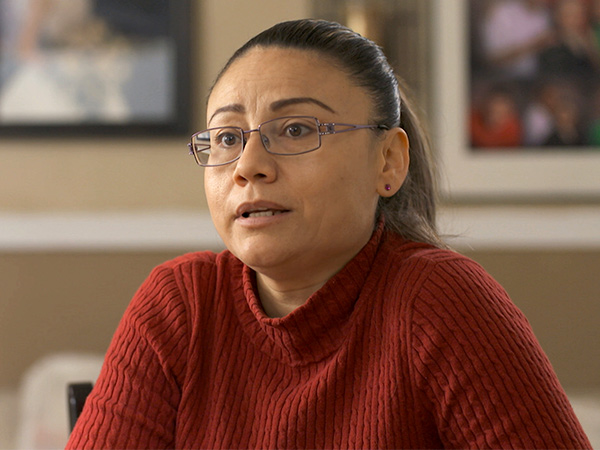 ROSA ROBLES LORETO: We are always living with that fear. We’ve always been trying to follow the rules. It was a very sad experience.

SEVERSON: When she was released after 60 days detention awaiting deportation, she found refuge at Southside. She lived with dread. So did her younger son, 10-year-old Jose.

JOSE: Every time I got sad and worried in school they helped me. My friends sit next to me and all that. They pat me on the back, and they tell me not to worry.

SEVERSON: She and her family have been living quietly in a mobile home, not a priority for deportation under President Obama. But under President Trump that could change.

REV. HARRINGTON: The idea that there are some mothers in my community who do not have the same protections that I have, that live in fear that they would be taken from their children cuts to the very core of my identity.

SEVERSON: Roy Beck is founder of Numbers USA, an influential congressional lobbying group with a mission of reducing the number of immigrants, legal and illegal. 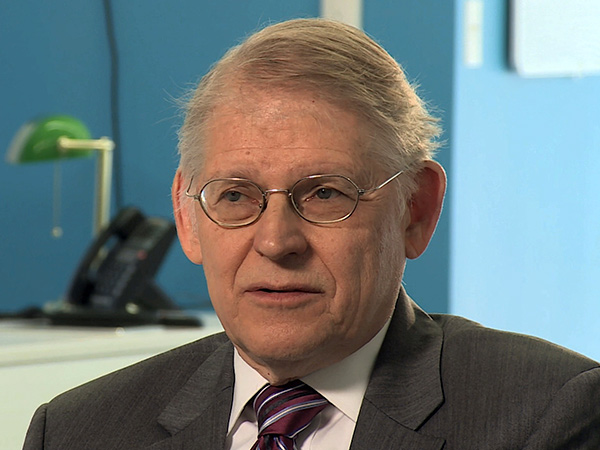 ROY BECK (Executive Director, Numbers USA): I do feel that the sanctuary churches are undermining the rule of law, which is the cornerstone of a just society. Every country has immigration policies, and the main reason you have immigration policies is to protect the vulnerable workers of your country. That’s a just law.

ROSA ROBLES LORETO: My faith has helped me to live day by day and feel that God is with me and with us, and I try to spread that happiness to others, to my friends, the people that I know who are very afraid.

SEVERSON: In fact, Rosa was not Southside’s first refugee. The sanctuary movement started here over 35 years ago when John Fife was the pastor. Back then, thousands of refugees were fleeing death squads in El Salvador and Guatemala.

REV. JOHN FIFE (Pastor Emeritus, Southside Presbyterian Church): We were just trying to save as many lives of refugees as we could on this border, and that was our only idea. 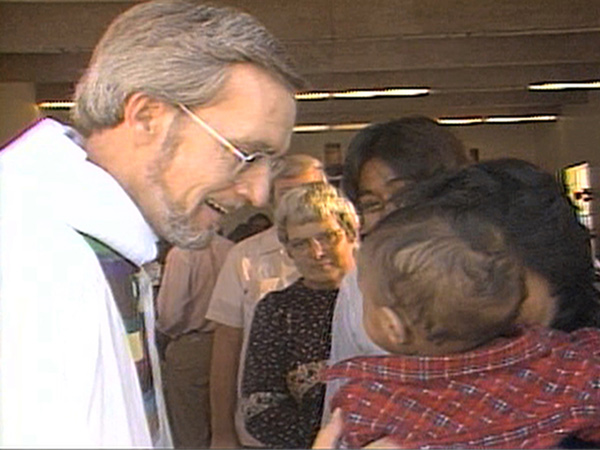 SEVERSON: Reverend Fife says he was motivated by a Quaker friend who said church leaders had no choice but to help refugees.

REV. FIFE: He pointed to two times in history. One was the abolition movement, when he said, some church folks helped runaway slaves cross state lines safely and move them through an underground railroad to safer and safer places. And then he pointed to the almost failure of the church in Europe in the 1930s and 1940s protecting Jewish refugees. And he said that’s one of the great historic failures of the church to be faithful.

SEVERSON: Over a number of years, more than 13,000 illegal immigrants have found refuge at Southside. Reverend Fife says in the 1980s the government did spy on churches with undercover agents and did indict 16 individuals, including himself. They were all sentenced to five years’ probation, even after they told the judge they intended to go back to the sanctuary movement.

REV. FIFE: Whenever they thought about coming into churches and synagogues, they thought that would be very bad publicity.

SEVERSON: This is Tucson’s current chief of police, Chris Magnus. 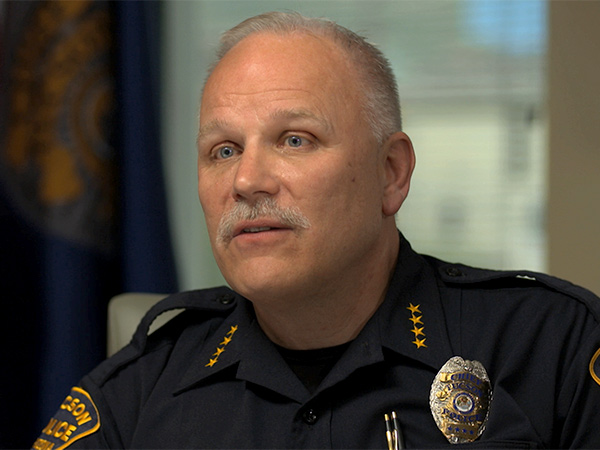 CHIEF CHRIS MAGNUS (Chief of Police, Tucson): Even putting the issue of immigration aside, just the idea of doing law enforcement inside a church or a place of worship, a mosque or wherever it might be, strikes me as a very, very bad proposition.

PRESIDENT TRUMP: Our order also does the following … cracks down on sanctuary cities.

SEVERSON: It won’t be easy for the new administration to crack down on illegal immigration, more than 500 cities and counties have policies that limit cooperation with federal immigration authorities. Of course they lose federal funding if they don’t cooperate. The real battle will likely take place in church sanctuaries, 700 congregations have already signed up, and more are expected.

CHIEF MAGNUS: Our intention has been for many years to be as welcoming community as possible to all our residents, regardless of their documentation status. We do not make inquiries about that status. Our goal is the safety of the community and so we would want anyone, certainly, who is a victim of a crime, who witnessed a crime, or those who could help us prevent a crime to feel comfortable working with the police.

BECK: The cause of illegal immigration is primarily businesses who break the law by hiring illegal workforce. We entice people to endanger their lives by sending these signals that it’s okay to break the law, and if you come you’ll probably be awarded. 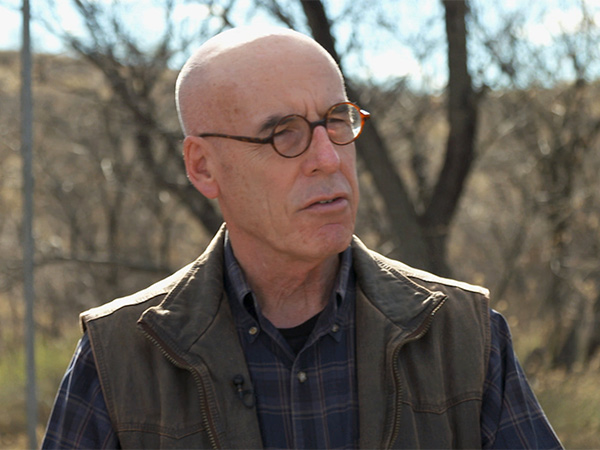 SEVERSON: The Sonoran Desert is a beautiful, desolate, and dangerous place. Hundreds, thousands of immigrants make their way through here each year. Bob Feinman knows. He works for a faith-based organization called Humane Borders, depositing troughs of water for desperate immigrants. But on this day someone had stolen the water trough.

BOB FEINMAN (Vice Chair, Humane Borders): They’re going to cross whether you like it or not, and we just don’t want them to die, which is why we put water here. But obviously those who vandalize us don’t feel the same way about having them die.

SEVERSON: What keeps bringing him back here, he says, is his faith.

FEINMAN: Didn’t spend a whole lot of time paying attention to the rabbis when I was in religious school as a child, but the one thing I remember was the seder every year at Passover, the Exodus. We were the ones that walked around in circles following Moses for all those years. People here are walking in circles, facing an uncertain future and facing death, as we did. 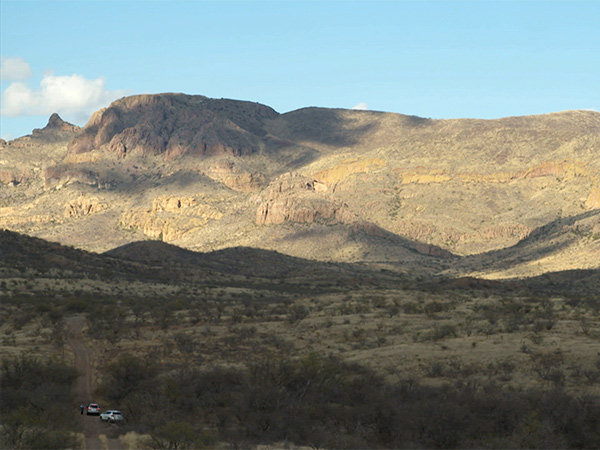 SEVERSON: In this part of the desert there were between 150 and 170 fatalities in 2016. The crosses along the way mean someone, some immigrant, died here.

PRESIDENT. TRUMP: The Secretary of Homeland Security, working with myself and my staff, will begin immediate construction of a border wall.

FEINMAN: Well, the people I’ve come in contact with—ranchers, retailers, attorneys, people in the fruit and produce business—I haven’t come across one who’s going to support a wall.

SEVERSON: No one here downplays the problem, but crime is not the biggest concern, as the president would have you think.

CHIEF MAGNUS: There is no correlation between higher rates of crime and immigrants, both documented or undocumented. It is safe to say without question there are some undocumented persons who are dangerous. But the great majority of people who come to this country, even illegally, are usually here for economic reasons—to try to support their families, to try to have a better life, or to flee some often really awful, horrific conditions in other countries. 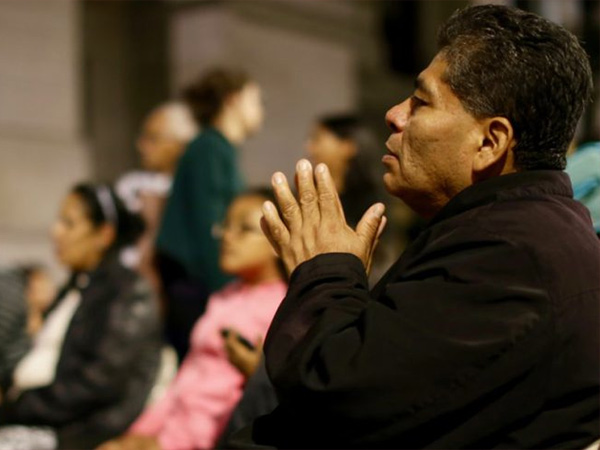 REV. FIFE: Actually, the border communities are—have the lowest crime rate in Texas, New Mexico, Arizona, and California of any other communities in those states. And immigrants have a much lower crime rate than native-born peoples in the United States.

SEVERSON: Roy Beck with Numbers USA says the point is not that immigrants create crime, but that they take jobs from low-skilled citizens.

BECK: I think there’s something like two billion people in the world that live on less than two dollars a day. There’s just no way you can handle that. You have to draw the line somewhere.

SEVERSON: The battle line has been drawn. Houses of worship in Tucson and throughout the country won’t back down. It’s unlikely the Trump administration will change its policy.

One of the  most frequently mentioned obligations in the Bible is to “welcome the stranger.”  Since the 1980s, churches and synagogues have offered sanctuary to undocumented immigrants facing deportation. Correspondent Lucky Severson reports on the current sanctuary movement from Southside Presbyterian Church in Tucson, Arizona where it first began, and talks with the church’s pastor, Rev. Alison Harrington, who says, “My scriptures don’t ask me but command me to stand with those who are being persecuted and those who are being oppressed.” He also interviews Roy Beck  of Numbers USA, a lobbying group that works to reduce the number of immigrants to the US, both legal and illegal. Says Beck, “I do feel that the sanctuary churches are undermining the rule of law, which is the cornerstone of a just society.”