Like John Paul II, Pope Francis relates well to millennials, Black’s generation, and to immigrants, refugees, the poor, the homeless, even inmates in prisons.

“He’s warm in a way that people feel touched by him, “ says Black, international communications coordinator for  last week’s World Meeting of Families in Philadelphia. That Catholic festival’s final days coincided with Pope Francis’ historic trip to the U.S. 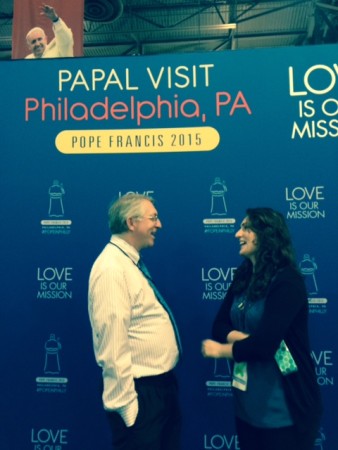 Jamie Lynn Black, an American studying in Rome, talks with her professor, Yago de la Cierva from the Pontifical University of the Holy Cross, during Pope Francis’ visit to Philadelphia.

Black, 27, and a New Jersey native with an undergraduate degree in journalism, is studying towards a three-year degree in church or social communications in Rome. Her devotion to Catholicism—and subsequent interest in church communications—strengthened after she saw and heard John Paul II at World Youth Day in 2002 in Toronto.

“I remember the mass that morning of World Youth Day. It had been raining all night. They (youth leaders) told us we were going to have to walk miles back in the rain. They said that and then as soon as Pope John Paul got up to say the opening blessing for mass, you felt the wind shift. Now it was sunny for the rest of the day. That kind of sealed it for me.”

In a postmodern world where people don’t always ask the big questions, Black says sometimes it takes the community built in a huge group, such as at a papal mass, to give “you that intimate experience with God.”

Though there are differences, she says both Francis’ and John Paul’s ministries were shaped by life experiences.

“I think both want freedom for people. John Paul II saw communism as the oppressor, as something that was an affront to human dignity,” Black said, referring to that pope’s experiences in Poland under communist control.

“Similarly, the young experience of Pope Francis—coming from an immigrant family in a Latin American country,” Black said.  “I think he sees poverty as the oppressor. When he talks about the dignity of the poor he is referring in one sense to certain economic models which exploit poor people.”

Francis, sometimes called the “people’s pope” because of his affinity for simplicity and reaching out, brings a new voice to modern religious and philosophical discussion, she said.

Cecile S. Holmes, longtime religion journalist, is director of the journalism sequence at the University of South Carolina’s School of Journalism and Mass Communications.