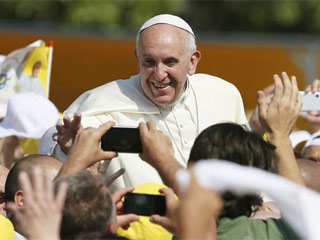 Pope Francis traveled to Brazil for World Youth Day this week, his first international trip since becoming pope in March. Large crowds greeted the pope throughout the week, as he emphasized his familiar themes of humility and concern for the poor. Nearly one million pilgrims attended the welcoming ceremony on the Copacabana beach in Rio de Janeiro. Earlier in the week, Francis celebrated mass at the Shrine of Our Lady of Aparecida, and he met with patients at a drug rehabilitation facility. The pope also visited a Rio slum, a favela, where he urged people living there not to lose hope.

Watch our conversation about the pope’s trip with Father Tom Reese, senior analyst for the National Catholic Reporter and a visiting scholar at Santa Clara University in California.