BOB ABERNETHY, anchor: We have a powerful special report today on children who live and work on the streets. The UN estimates there are 100 million such kids, seven million of them in Brazil. On her recent trip to Brazil, Kim Lawton met and followed a British Christian who is spending her life trying to rescue some of those children.

KIM LAWTON: Sao Paulo is one of the largest cities in the world, and across this bustling urban sprawl, a growing global problem: children -- millions of them -- working and living on the streets. They lead a precarious, all too dangerous life. 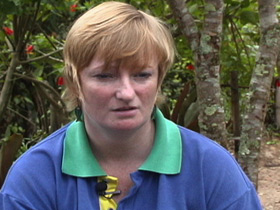 CALLY MAGALHAES (Co-founder, Associacao Aguia "Project Eagle"): Living on the streets, sleeping on the streets, they're exposed to pedophiles, to corrupt police that want to harm them in some way, to anybody who wants to do them harm, and so many of our children are murdered. Many of them die.

LAWTON: Cally Magalhaes and her husband George have made it their lives' work to try and save them.

Ms. MAGALHAES: One by one, we're trying to get the children off the streets in Sao Paulo.

LAWTON: British-born Cally is an evangelical Christian. She first became aware of the problem of street children in 1994 after reading about it in a magazine.

LAWTON: She moved to Brazil and began working in the slum neighborhoods called favelas. There, she met a Brazilian man, George, who shared her vision. They got married and founded a nondenominational ministry called Associacao Aguia -- "Project Eagle" -- to try and rescue street children.

LAWTON: Cally, George, and their teams of volunteers work directly in the streets, finding the kids and trying to build their trust. 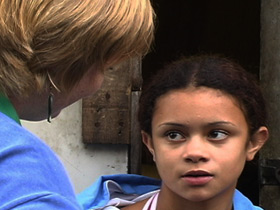 Ms. MAGALHAES: Sometimes we just go and talk. Sometimes we take a bag of activities. We do drawings, and they do colorings. It's very fascinating to see what they draw. Often they draw houses and families, because that's their dream.

GEORGE MAGALHAES (Co-founder, Associacao Aguia "Project Eagle"): Actually, I present myself as a friend to the boy or a girl. I say, "I want to be your friend, and if I can help in some way, you can tell me what I can do to help you."

LAWTON: As they chat with the children, they try to find out their situation.

Ms. MAGALHAES: I asked him where he lived, and he wouldn't tell me. And I said, "It's okay. I'm not going to take you home. I just want to help you if I can," and he told me where his mom lives.

LAWTON: But he doesn't live with her?

Ms. MAGALHAES: No, he lives here on the streets.

LAWTON: There are two types of street kids. The first are called children on the street. They do actually live with their parents, usually in a shack or slum. But they work all day on the streets, begging or finding odd jobs.

Ms. MAGALHAES: At the end of the day they go back and give the money to their mum or stepfather or whoever, and sometimes that money is used to buy food. But more often it's used to buy alcohol or drugs or something like that.

LAWTON: Then there are children of the street, those who live here day and night. Often, they've ran away, either to escape abuse or to use drugs. Many steal to survive and to support their addictions. Some move on to more serious crimes. Children start doing drugs young here. They get high by inhaling glue and paint stripper. 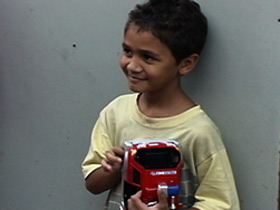 Ms. MAGALHAES: They put it in what looks like a bottle of mineral water, and then they breathe that through their mouth. It's actually worse for them than if they're sniffing glue. They're so high on paint stripper.

LAWTON: Over time, Project Eagle volunteers get to know the children and then try to figure out what the best situation for them would be. Can they return home, or do they need to go into drug rehab? Gisele, who's now 16, left home years ago to live on the streets.

LAWTON: Four months ago, she had a baby and moved back home with her mother. Today, Gisele left her baby at home, and Cally finds her hanging out on the streets again. Project Eagle also offers practical help such as food and medical assistance.

Mr. MAGALHAES: The whole Gospel is the one that not just says God bless you, but to provide everything to be necessary for the person.

LAWTON: On this day, they're bringing packages of food to kids who live in what's called a squat -- a rambling den of makeshift shanties under a bridge. More than 50 people live here, including 38 small children. These kids have all been on the streets for years. Julia is eight-and-a-half months pregnant. I asked if she's worried about having a baby here. 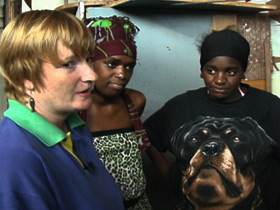 Ms. MAGALHAES (translating for Julia): She said it should be okay. The problem is if she goes into labor here, and she's not well; the ambulance won't come here. She has to go by foot to the hospital.

LAWTON: The kids tell me they're glad to have some shelter, but they say they sleep with one eye open. People throw kerosene in here to try and drive them away. Street children are often attacked. Many simply disappear. They are often viewed as a social nuisance, or worse.

Ms. MAGALHAES: They pick pockets. They steal people's mobile phones. They cause a lot of problems, and so people don't see them as a child who needs love and care and a new future. They see them as a huge problem, and so what do you do with a problem? You try and eradicate it.

LAWTON: Vigilantes and corrupt cops have been accused of killing the children just to get rid of them. Some are taken to youth prisons where George goes to counsel them.

Mr. MAGALHAES: Inside the youth prison it's better to talk to them because they are not taking drugs there, so I can talk to them clearly. And most of those, they want some help.

Ms. MAGALHAES: When we went to the youth prison at the beginning, they used to give us sort of mild cases, like a child who'd maybe stolen an apple or that kind of thing. And now they give us the murderers and the rapists and the kidnappers. And they look at us and they say to us that this one only God can change. And it's true.

LAWTON: Some of the children rescued from the street end up here, at this rehab compound called "In the Hands of the Angels." They're treated for drug and alcohol addiction and taught basic life skills. It's a church-run ministry about an hour outside the city. The young men here farm, go to school, and get vocational training. One of the residents is a 19-year-old former street kid named Danilo. Danilo says he ran away from home when he was eight because his alcoholic father abused him. George met Danilo in youth prison, and after he was released George got him placed here five months ago. Danilo says God has given him a new life.

DANILO (translated by Ms. Magalhaes): I just want to thank God that I'm here and that without God there's nothing -- that I'm here today and I'm well and I'm healthy because of God. And someone who hasn't got God hasn't got anything. 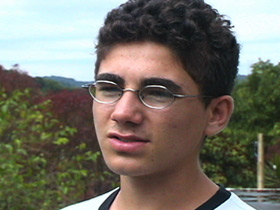 LAWTON: He says he wants to go university and study anatomy. He never wants to go back to the streets, and he worries about the kids still there.

LAWTON: One of the biggest challenges, Cally says, is getting street children to think beyond today.

LAWTON: Project Eagle tries to help them find their dreams.

Ms. MAGALHAES: You know, they have dreams. It's just that they're so deep down inside them that no one ever bothers to pull them out of them, and so we try to talk to them about thinking about tomorrow, helping them to look at themselves and believe in themselves -- that they can have a future, that they don't have to live on the street in the middle of such dirt and violence and crime and drugs, that God created them, that he loves them and that he has a plan for their lives.

LAWTON: But it can be work with a low rate of return. 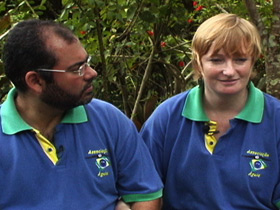 Mr. MAGALHAES: The first year we worked on the streets, we took 11 people to rehabs. And at the end of the year the 11 people were back to the streets.

Ms. MAGALHAES: When you invest time into a person's life and you love that person -- we love the children that we work with, and you want to see them succeeding, and then just suddenly something will happen, and they'll run away from the rehab or -- it's just so sad. And we do cry. We weep into our pillow because we feel so sad for that person's life.

LAWTON: Still, they press ahead. They're training new volunteers, including ex-street children, and they are working to build new family-based rehabilitation centers. They believe that, bit by bit, they can make a difference.

Ms. MAGALHAES: We don't mark success by numbers. We mark success by a hug, cleaning a child's face, washing their feet, giving a family a packet of food that they would be starving hungry if they didn't have that food that day. Just doing something to make that person's life better in some way and showing the love of Jesus to them.

The UN estimates there are 100 million children who live and work on the streets, with seven million of them in Brazil. On her recent trip to Brazil, Kim Lawton met and followed a British Christian, Cally Magalhaes, who is spending her life trying to rescue some of those children.

"Children in the Streets of Brazil" by James Inciardi and Hilary Surratt, 1997 Consortium for Street Children Hope Unlimited for Children