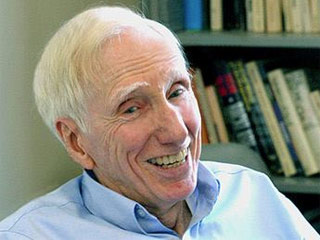 Distinguished sociologist of religion Robert Bellah died yesterday, July 31, in Berkeley, California. He was 86. The public affairs office at UC Berkeley once described him as “a sociologist and a sermonizer, a believer in God and in reason, a Jeremiah and an apostle of hope.” Among his best known works was the influential “Habits of the Heart: Individualism and Commitment in American Life,” first published in 1985. It’s preface began, “How ought we to live? How do we think about how to live? Who are we, as Americans? What is our character?”

In a sermon Bellah preached in 2000 at All Souls Episcopal Church in Berkeley, his parish church, he said, “We must learn not to be afraid of death, even our own, for death is part of life, and living or dead we are part of one living community…it is in the Eucharist that it all comes together: with all the company of heaven, the communion of the saints, and of all souls, all enfolded in one time, time out of time, all equally present—past, future, and to come.”