A Journey of a Thousand Miles: Peacekeepers follows three women in an all female, predominantly Muslim unit of police officers sent to post-earthquake Haiti as UN Peacekeepers for one year. The mission challenges these women while shattering commonly held stereotypes.

Despite the emerging evidence of women’s unique ability to prevent and resolve conflict, women are consistently excluded from the negotiating table and peacekeeping missions. 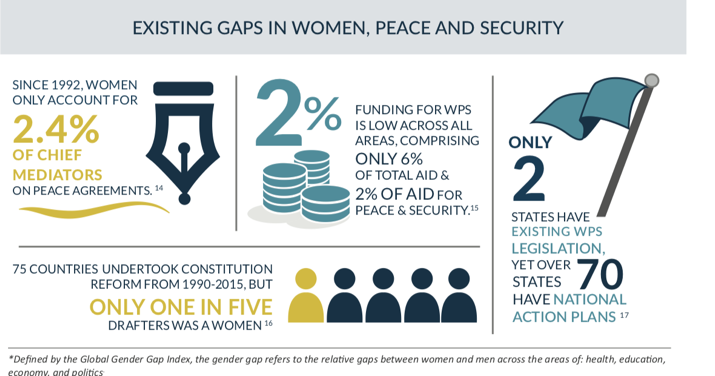 Women are the key to peace. It’s all in the numbers.

The industries of peacekeeping and peacebuilding have long been dominated by men.

But over the past decade, overwhelming research has emerged that gender equity goes hand in hand with peace and stability in society. For example, when women influence decisions about war and peace, the likelihood of conflict resolution without violence increases.

According to Swedish scholar Desirée Nilsson, the participation of civil society groups, including women’s organizations, makes a peace agreement 64 percent less likely to fail. And when women participate in peace processes, the resulting agreement is 35 percent more likely to last at least 15 years, according to the International Peace Institute.

Yet, just only a small percentage of funding dedicated to peace and security goes to gender equality or women’s empowerment. For example, only 5% of bilateral aid targets gender equality as a principal objective in conflict and post conflict countries.

Many studies show a direct relationship between women’s decision-making power with regard to peace and conflict, and the likelihood that war will break out.

As Marie O’Reilly points out in her 2015 Why Women? Report for Inclusive Security, a 2005 quantitative analysis found that higher levels of female participation in parliament reduce the risks of civil war. Another report, using data on international crises over four decades, found that as the percentage of women in parliament increases by five percent, a state is five times less likely to use violence when faced with an international crisis.

In terms of political violence perpetrated by the state, O’Reilly notes that statistical analysis of data from most countries in the world during the period 1977–1996 showed that the higher the proportion of women in parliament, the lower the likelihood that the state carried out human rights abuses such as political imprisonments, torture, killings, and disappearances.

A study of 58 conflict-affected states between 1980 and 2003 found that when no women are represented in the legislature, the risk of civil war relapse increases over time, but “when 35 percent of the legislature is female, this relationship virtually disappears, and the risk of relapse is near zero.”

“After the first two conflicts ended in relapse, women held 13 percent of parliamentary seats and the female-to-male literacy rate was 0.58, on average,” O’Reilly writes in her report. “In contrast, women held an average 21 percent of parliamentary seats in the decade following the 1994 genocide and the literacy ratio jumped to 0.85. As of 2015, women’s representation has increased to 64 percent—the world’s highest percentage of women in parliament.”

There is actually a UN Security Council Resolution that is committed to making sure women are involved in peacekeeping operations.

In 2000, the UN passed the landmark Security Council Resolution 1325 – the first resolution to address the disproportionate and unique impact of armed conflict on women.

But it wasn’t until 2014 that Major General Kristin Lund of Norway was appointed as the first woman to serve as Force Commander in a United Nations peacekeeping operation — the UN Peacekeeping Force in Cyprus.

Still, as Megan Roberts, associate director of the International Institutions and Global Governance program at the Council on Foreign Relations, points out, “the United Nations has repeatedly failed to meet its own pledges to achieve gender parity.” For instance, women comprise a meager proportion peacekeeping force – 4 percent of soldiers and 10 percent of police deployed to UN missions. Women make up a greater proportion of the UN’s deployed civilian staff, though at 22 percent, they are still underrepresented, especially at senior levels.

Under the new law, as Our Secure Future outlines, the President is required to submit a Women, Peace, and Security Strategy to the US Congress and should promote women’s participation in conflict prevention. Also, the US Department of State and the US Department of Defense must provide gender analysis training for conflict prevention, mitigation, and resolution. The Department of State and USAID will also establish guidelines for use by overseas US personnel when consulting with stakeholders to ensure the meaningful participation of women in the prevention, mitigation, and resolution of violent conflict.

Love for the foreigner, lost in a foreign land.
Learn how WTB breaks down the idea of “the other” and builds relationships between people.
Discover how some of the biggest recent international events have been shaped by women.
Eman Abdelrahman, a student at Virginia Tech, shares what peace means to her.
Egyptian native and single mom Mai Dahshan shares her thoughts on living in peace.
Dr. Grace Edwards talks with Blue Ridge PBS about the strength of Appalachian women.