January 4, 2019 | BY Claralyse Palmer
POSTED IN Food
MORE ABOUT Rodents of Unusual Size

Vegetarianism has become synonymous with environmentalism, the idea being that going meat-free saves not just animals but the planet (which certainly has some truth to it, especially when it comes to cattle). But the Independent Lens film Rodents of Unusual Size presents sustainable eating as something more nuanced than total renunciation of animal products.

Differences in a region’s ecology and geography can compel sustainable eaters to embrace an unconventional, and even unpopular, diet. Rodents depicts how, on Delacroix Island and throughout Louisiana’s coastal wetlands, these differences have spurred consumption of dachshund-sized, semi-aquatic rodents.

Enter nutria – twenty-pound swamp rats with carrot-orange teeth and a population so invasive that the Louisiana Department of Wildlife and Fisheries gives hunters $5 for a nutria tail and $1 for a nutria heart. Originally brought to the area as a cheap alternative in fur fashion, the nutria population has since become entirely unmanageable. Their meal of choice? The plant matter and roots that physically hold swamplands together.

As nutria chomp away at Louisiana’s natural vegetation, the surrounding communities are fighting to keep from literally falling apart. But the eradication of nutria is, as is the case with so many other invasive species, a futile cause; the rodents are so pervasive that they’ve become inseparable from life in the area.

This tension between native land and invasive species plays out across the globe. While nutria destroy coastal zones from Oregon all the way to South Korea, feral hogs cost Texans millions of dollars in agricultural damage, Asian carp threaten aquatic life throughout the Mississippi basin, and bullfrogs ravage ecosystems across the Pacific Northwest. Eliminating these species is biologically unfeasible; controlling them as they currently exist is near impossible. While eating nutria and bullfrog feels cringeworthy, there are conservationists and cooks alike who turn invasive species into edible, nutritious, and even tasty dishes as a way to mitigate this overwhelming environmental threat.

Instead of spending time and resources attempting to eradicate these species, Parola advocates for the creation of a commercial market for edible invasive products. To those who doubt this could make a dent in invasive populations, Parola references the story of Paul Prudhomme, a Louisiana chef who developed the explosively popular blackened redfish dish in 1980. Parola explains that demand for the dish rose so rapidly that “with that single recipe, Prudhomme almost eradicated the entire redfish species.” (Redfish, which is not an invasive species but nonetheless demonstrates the impact a dish can have on the environment, has made a bit of a comeback since then.)

Parola, who is originally from France but moved to Louisiana in the ‘80s, has worked extensively with the Louisiana Department of Wildlife and Fisheries in an attempt to mainstream eating nutria. While regulations and stigmas complicated any commercialization of a nutria-based product, Parola still has hopes to standardize the consumption of invasive species. His latest work has revolved around turning destructive Asian carp into commercialized “Silverfin” fishcakes. Nutria, which Parola likens in taste to “dark turkey meat,” could be next if his Silverfin model is successful.

Parola is essentially the lone champion in this effort to mass commercialize consumption of invasives. Total conviction in the viability of mass marketing invasive species isn’t necessarily shared among conservationists and nature conservancy groups, but many do encourage eating these species as a part of assuaging the consequences of non-native population explosion. The Florida Keys’ Reef Environmental Education Foundation holds “lionfish derbies” to kill and cook as many invasive lionfish as possible in a single day, and the Institute for Applied Ecology (IAE) in Corvallis, Oregon hosts an annual Invasive Species Cook-Off.

Tom Kaye, Executive Director of IAE, explains that the cook-off began as a simple retirement party for a colleague, but has since become a community-wide event. “Our goal is to raise awareness – we don’t really think we’re going to help eat our way out of the problem,” he says. “We’re just trying to increase awareness to the general public, to tell them that invasive species are out there and they do serious harm to ecosystems.” With four culinary categories – meat, vegetarian, desserts, and beverages – the cook-off draws over 200 attendees each year and touts “eradication by mastication” as a way to help reduce the damage imposed by invasive populations. IAE has even published a cookbook full of recipes involving invasive flora and fauna.

“Bullfrogs are a major ecological disaster,” says Dr. Kaye. “Most people don’t eat them anymore because there’s that squeam factor with bullfrogs – same with nutria. Cooked well though, these things are really great.” Every year, Dr. Kaye fries up a batch of cajun-seasoned, lightly-breaded fried bullfrog legs (see picture at right). “They taste like chicken,” says Dr. Kaye. “And the kids are far more open to eating them than anyone else – if I have leftover legs, they’re always the ones who finish them up.”

Past cook-off recipes have included crayfish etouffee, blackberry pies, and whole roast nutria. Andrew Esterson, a restoration ecologist at IAE, sees education and outreach as the most valuable assets in the effort to reduce invasive populations. “It is certainly a great idea to cook with invasive species, but a challenging one,” he explains. “Education would go a long way. Perhaps if there was a demand for nutria it would start showing up at farmers markets or on the shelves at grocery stores.” Esterson’s first time cooking with an invasive species was for the 2018 Invasive Species Cook-Off, and he took home first prize in the meat category. His winning recipe? Nutria chile verde.

Chefs across the country have cooked up all kinds of ways to prepare invasive species. For more information on what invasive species affect ecosystems near you, and how to transform these species into tasty dishes, check out Eat the Invaders, Can’t Beat ‘Em Eat ‘Em, Green Global Travel, or some of the recipes we’ve compiled below.

Claralyse Palmer is a writer, trombonist, avid music freak, and cheese-eater based in San Francisco, who works at ITVS. 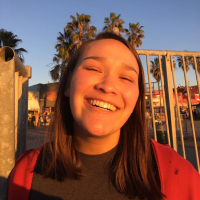 Claralyse Palmer is an avid music freak and ITVS employee based in Oakland, CA.
VIEW ALL POSTS BY Claralyse Palmer
Please review our comment guidelines.