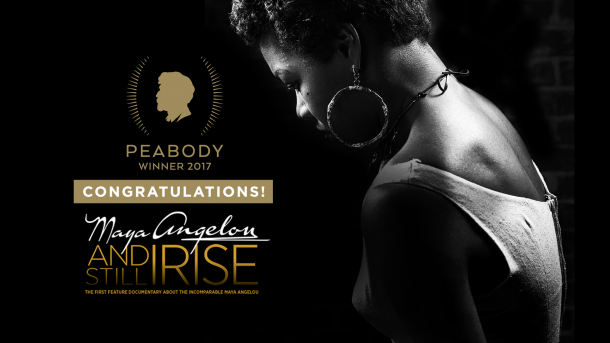 American Masters is honored to receive a 2017 Peabody Award for Maya Angelou: And Still I Rise for excellence in documentary filmmaking.

Maya Angelou: And Still I Rise is the first feature documentary on the singer, dancer, activist, poet and writer who inspired generations with lyrical modern African-American thought that pushed boundaries and gave people the freedom to think about their history in a way they never had before. Filmmakers Bob Hercules and Rita Coburn trace Dr. Angelou’s incredible journey, shedding light on the untold aspects of her life through never-before-seen footage, rare archival photographs and videos and her own words. The film includes exclusive interviews with Dr. Angelou, Oprah Winfrey, Common, Bill and Hillary Clinton, and others.

As part of the Peabody 30, the program was considered “the best of the best” out of 1,200 entries in television, radio, podcast, and web programming broadcast in 2017. This is American Masters 13th Peabody Award.

Since 1940, the prestigious George Foster Peabody Awards have honored excellence in broadcasting. The awards now recognize excellence in digital storytelling as well. The 77th Annual Peabody Awards Ceremony will take place on Saturday, May 19, 2018 in New York. Hasan Minhaj will be Master of Ceremonies.

Maya Angelou: And Still I Rise is available to stream on pbs.org/americanmasters through April 30, 2018. You can also listen to a recent episode of the American Masters Podcast featuring Dr. Maya Angelou.