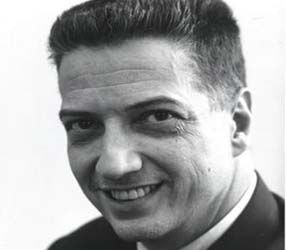 John Hammond was responsible for discovering Benny Goodman, Count Basie, Billie Holiday, Robert Johnson, Bessie Smith, Bob Dylan, Aretha Franklin, Pete Seeger, and Bruce Springsteen, among others. As a producer, writer, critic, and board member of the NAACP, he was credited as a major force in integrating the music business. An early inductee into the Rock and Roll Hall of Fame, John Hammond was one of the most important figures in 20th century popular music.

Born in 1910, Hammond was the fifth child of a wealthy New York family. From an early age, he showed a great interest in music. At age four he began studying the piano, only to switch to the violin at age eight. In his early teens he explored Harlem—listening to radio and live performances of black musicians. In 1927 he heard Bessie Smith sing at the Alhambra Theater. It was the peak of her career, and the performance would remain an influence on Hammond the rest of his life.

The next year Hammond entered Yale University, where he studied the violin and later the viola. He made frequent trips into New York and wrote regularly for trade magazines. Though a serious musician, his greatest talent would be in listening to, not playing, music. Eventually he dropped out of school for a career in the music industry—visiting England and becoming the U.S. correspondent for MELODY MAKER. Returning to the states, Hammond self-funded the recording of pianist Garland Wilson. The songs sold thousands of copies and brought Hammond, at age twenty, his first success as a record producer.

On his twenty-first birthday, Hammond moved to Greenwich Village, where he engaged in the bohemian life and leftist subculture. Though privileged since birth, Hammond recognized the gross injustice of the time and began working for an integrated music world. He was the funder and DJ for one of the first regular live jazz programs, and wrote regularly about the racial divide. His main concern, however, was jazz, and throughout the 1930s he was responsible for both integrating the musicians and expanding the audience.

Among the earliest musicians to work with Hammond were Fletcher Henderson, Bessie Smith, and Benny Goodman. When they began working together, Goodman’s band was completely white, and with the help of Hammond and great musicians like Teddy Wilson and Lionel Hampton, the color barrier began to fade. It was around this time that Hammond saw a young Billie Holiday perform. She was seventeen and Hammond thought she was one of the greatest singers he had ever heard. He began to write about her, and to introduce her to other musicians, including Teddy Wilson and Benny Goodman. Towards the end of the 1930s, Hammond organized the “Spirituals to Swing” concert, which brought much black music into the white spotlight for the first time.

Soon after “Spirituals to Swing,” Hammond invested in the first integrated night club, Cafe Society. The 1940s, however, were a time of great personal distress during which he lost a son and was divorced. He spent much of his time in Europe concentrating on classical music. It was not until the late 1950s that he became active in the industry again. It was then that he found an eighteen year-old singer with gospel roots and a powerful voice. He said she was the greatest singer since Billie Holiday, and it wouldn’t be long before the rest of the world felt the same way about Aretha Franklin.

Working for Columbia records, Hammond found in the political singers of the 1950s and 1960s a vibrancy similar to that of the jazz musicians thirty years earlier. He signed Pete Seeger, and found a young folk singer among the crowds of Greenwich Village named Bob Dylan. His early recordings of Dylan included “Blowin’ in the Wind” and “A Hard Rain’s A-Gonna Fall.” Important for the simplicity of their production, they attest to Hammond’s versatile skill and ability to bring out the best in a wide range of talent. In 1975, Hammond retired from Columbia, though he continued to scout for talent for many years. By the time of his death in 1987, the popular music industry had grown to be a more integrated and politically responsible community, and much of this progress was due to the talent and commitment of John Hammond.