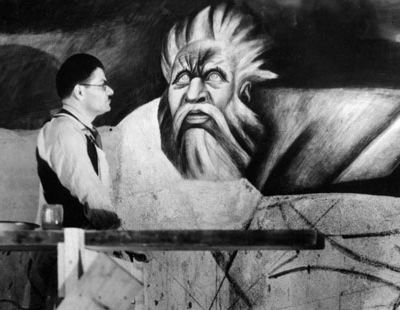 Art is knowledge at the service of emotion.
-José Clemente Orozco

The life of Mexican muralist José Clemente Orozco (1883-1949), a life filled with drama, adversity, and triumph, is one of the great stories of the modern era. Despite poverty, childhood rheumatic fever that damaged his heart and an explosion in his youth that cost him his left hand, Orozco persisted in his wish to become an artist. He experienced the carnage and duplicity of the Mexican Revolution, the hardship following the New York stock market crash in 1929, and rising fascism in Europe during his only trip there in 1932, and emerged with an aesthetic and moral vision unparalleled in twentieth century painting.

A taciturn individualist, highly sensitive and utterly inept at self-promotion, Orozco had a sharp tongue and mordant sense of humor. Described by a contemporary as “the only tragic poet America has produced,” Orozco was first and foremost a public artist whose greatest achievements were the murals he created not for individual patrons, but for the whole of society. Yet, in comparison with his colleague and rival Diego Rivera, until recently the name of this pre-eminent public artist was little known to the public. Orozco’s work was marginalized as complex and controversial, while Orozco the man has been considered as something of an enigma. Who was this solitary figure who spent years alone on scaffolds creating works that challenge both social norms and the art establishment?

Born in Zapotlan el Grande to a middle-class family that fell on hard times, Orozco was shaped at the outset of his career by the experience of ten years of civil war that gripped Mexico during the second decade of this century. He was twenty-seven when the Revolution began, thirty-four when he left Mexico for the United States for the first time in 1917. Some measure of the brutality he witnessed during those years is conveyed in his autobiography:

People grew used to killing, to the most pitiless egotism, to the glutting of the sensibilities, to naked bestiality. … In the world of politics it was the same, war without quarter, struggle for power and wealth. … Underneath it all, subterranean intrigues went on among the friends of today and the enemies of tomorrow, resolved, when the time came, upon mutual extermination.

Haunted by the savagery and treachery of this period, Orozco’s idealism took a resolutely apolitical form. He saw concepts of race and nationality and dogmas of political and religious salvation as idols that corrupt understanding and prevent the emancipation of the human spirit. Only by throwing off the shackles of creeds and prejudices that have enslaved humankind to authoritarian purposes, he believed, can genuine harmony of individual expression and social purpose come into being.

Under-appreciated as an artist in his native Mexico until late in his career, Orozco spent a total of ten years in the United States. He created four major murals here (at Pomona College, the New School for Social Research, Dartmouth College, and the Museum of Modern Art), along with hundreds of easel paintings and graphic works that challenged U.S. stereotypes of Mexican art. Despite episodes of censorship and periods of financial deprivation, Orozco became a pioneer of the public arts movement of the 1930s and 40s. Isamu Noguchi, Ben Shahn, Jackson Pollock, Philip Guston, and Jacob Lawrence were among the American artists influenced by his expressionist style. In the 1960s and 70s, Orozco’s work helped inspire a new generation of Chicano and African American muralists to reinvent public art within their communities. His legacy continues today among contemporary artists on both sides of the border.

Orozco created major frescoes in Mexico after his return there in 1934, including the magnificent cycle with which he covered the interior walls of the Hospicio Cabañas in Guadalajara in 1939. The immense nave, encompassing a series of arched panels and semi-circular ceiling vaults, provided a dramatic space for Orozco to explore the interplay of indigenous and European forces within modern-day Mexico. At the center of the nave, sixty meters above the floor, his majestic Man of Fire ascends into the cupola of what has become known as the “Sistine Chapel of the Americas.”

The last time Orozco returned to the U.S. was in 1945. In the throes of midlife crisis at the relatively late age of 62, he told a friend, “I need to do it to renew myself.” But the much-anticipated creative renewal did not materialize, and after months of struggle and soul searching, Orozco returned home. In his final years, Orozco continued to climb the scaffolding, although his damaged heart forced him to stop and catch his breath every few steps. He completed his last fresco less than a month before he died in his sleep of heart failure at the age of 65.

A key to understanding Orozco’s work is an awareness of the relation between the artist’s passionate idealism and his pessimism. Spain’s greatest filmmaker, the late Luis Buñuel, declared that “man is never free, yet he fights for what he can never be, and that is tragic.” Orozco’s sense of the human condition was based on a similar conviction of tragic impasse. “To have a tragic vision in the Americas is extremely difficult,” says Mexican writer Carlos Fuentes, “because we were founded as the Brave New World of happiness, the great utopia. So when a writer like Faulkner breaks through the optimism of the United States, or a painter like Orozco breaks through the promise of Mexico of the New World, it is a very striking event.” Through his art Orozco shared his trauma and his anger, which he insisted over and over, in many forms, is our trauma and should be our anger. “Painting,” Orozco believed, “assails the mind. It persuades the heart.”

For more information, and to download a study guide, visit the filmmaker’s Web site.