You can stream "Muhammad Ali," a film by Ken Burns, now!
Published on February 22, 2022 by Madisson Haynes
Share 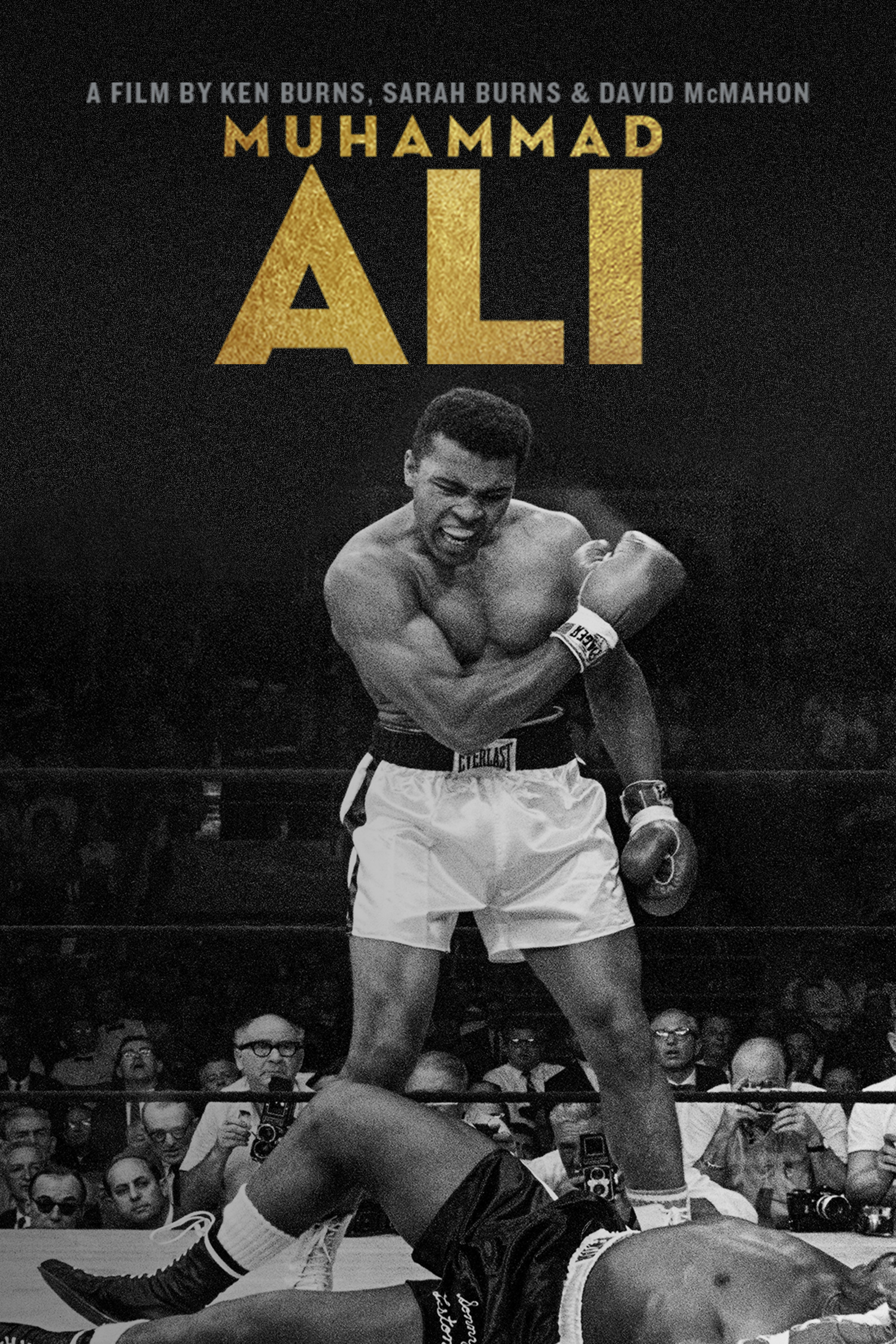 Muhammad Ali was more than an athlete, and five years after his death we continue to celebrate his legacy. "Muhammad Ali,” a film by Ken Burns, is streaming again! This film brings to life the infamous boxer while highlighting his rich career. You can watch all four parts now.

In celebrating of this streaming and the legend himself, we're also taking a look at each of the four Ali murals commissioned by PBS, representing his rich history.

Brick walls across four major U.S. cities have been transformed into cultural canvases. The subject? Muhammad Ali. Five local artists across these cities painted walls in LA, New York, Dallas and Chicago to represent boxing legend Ali and the impact he had on the Black community, five years after his death.

Muhammad Ali started his journey to stardom before even reaching his teens. He was an American former heavyweight boxing champion, one of the greatest athletic figures in the 20th century, an Olympic gold medalist and the first fighter to capture the heavyweight title three times.

But at the peak of his success in April 1967 he refused induction into the U.S. Army, citing religious beliefs at the height of the war in Vietnam — “I ain’t got no quarrel with them Vietcong,” he said.

Ali was stripped of his championship and was forbidden from fighting by every state athletic commission in the U.S. for three-and-a-half years. He was criminally indicted but remained free on bail. after three years he started to box and continued until his final ring contest was a loss by decision in 1981 to Trevor Berbick.

His final record of 56 wins and 5 losses with 37 knockouts has been matched by others, but he’s commonly known as one of the greatest fighters to ever live. But it’s his activism and political outspokenness that has imprinted on many across the country to this day.

These street artists have diverse education experiences, backgrounds in art, personal histories and life experience, but one thing they do share is a passion for creating. The artists and their locations are Tex Moton and Jeremy Biggers in Dallas, Rahmaan Statik in Chicago, BK Foxx in New York and Enk One in Los Angeles.

Each of these artists planned, designed and executed these murals with the hopes that Muhammad Ali’s history and activism be brought to light, especially in a time where art isn’t as accessible to people of color. 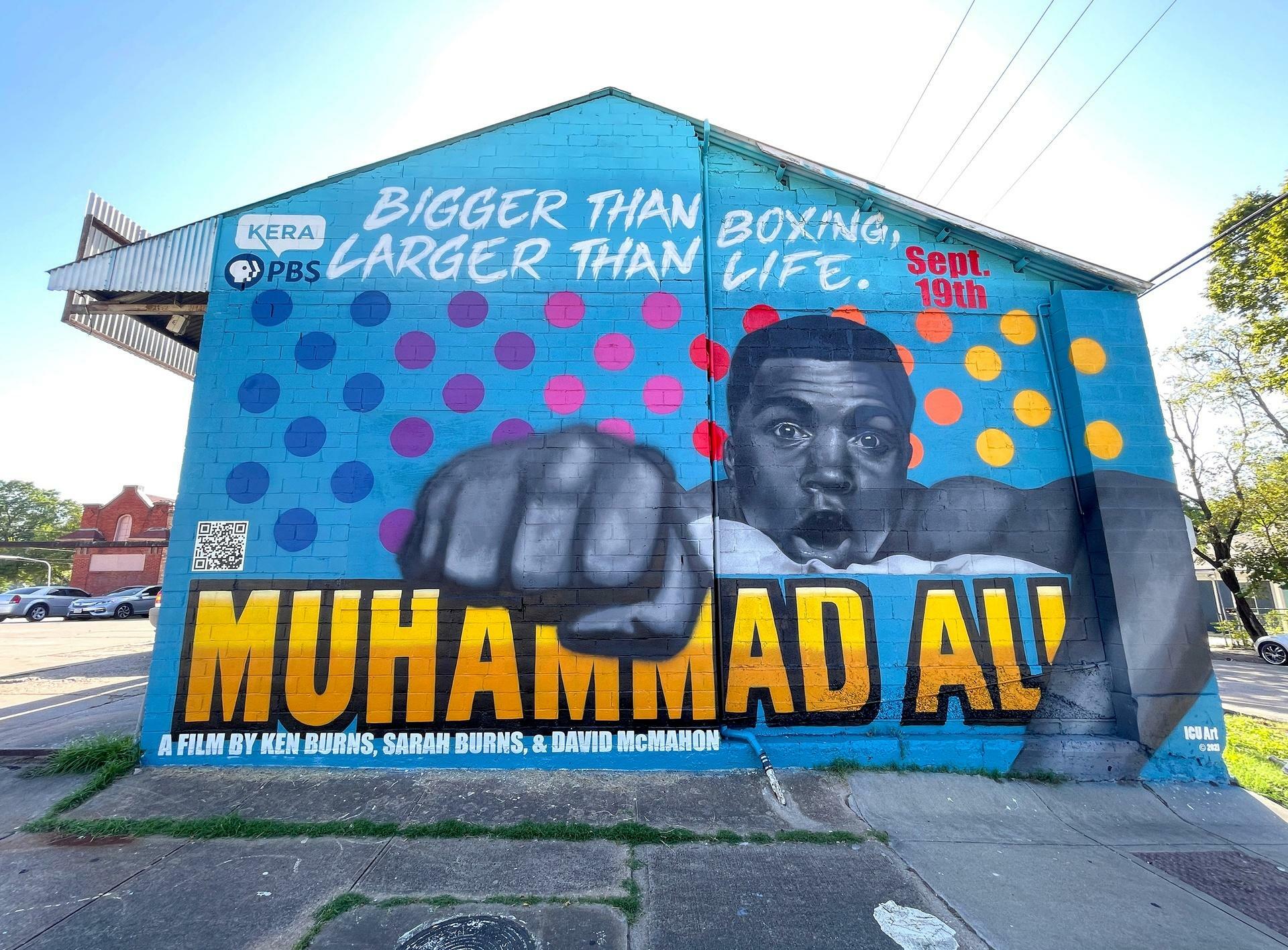 "A lot of art historically hasn't featured people that look like us in a feature roll — maybe background, maybe assistant, maybe, you know, a servant role as a figure in a painting,” Jeremy Biggers, one of the Dallas mural artists, said. “So, it's super important for me to show [that] representation to other people because throughout history, we've always been excluded from that conversation. We’ve been excluded from that imagery. A lot of times, black men especially are portrayed in media one way, which is either a thug or a criminal or drug dealer or pimp, or just any negative connotation. I mean, there's no shortage of movies and news stories and things that speak to that narrative.”

Biggers said he has dedicated a majority of his craft to painting black men, not just Muhammad Ali.

"Something I do in studio — it's really an incredibly vital part of what I do — is showing black men being something other than what people view us as typically,” Biggers said. “Being able to paint somebody that's an icon that is of Mohammed Ali's stature? … It’s gonna be a yes from me every time because of what he means to be outspoken and unapologetic. To be black." 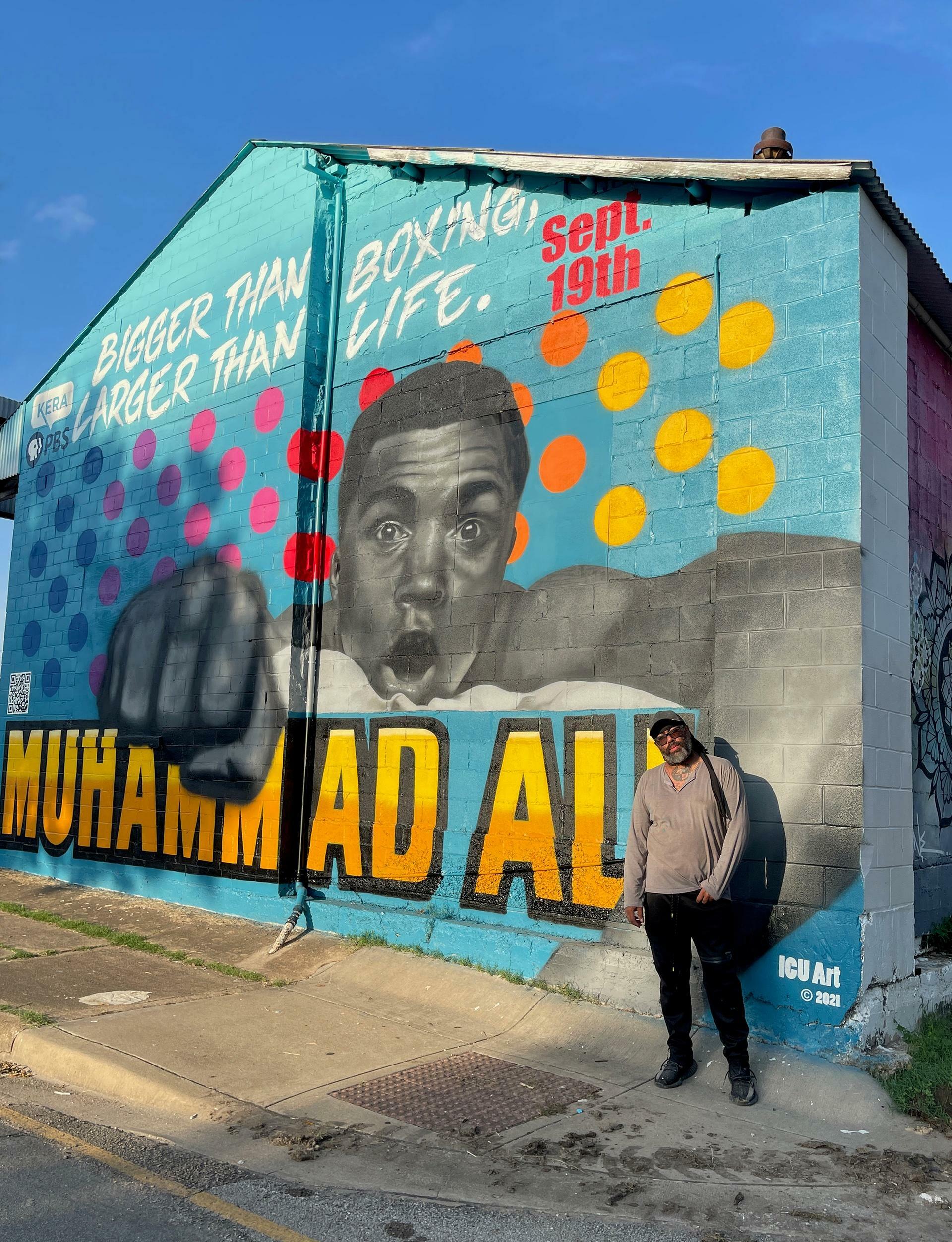 The murals were created in a street art style, using spray paint, but the artists want viewers to see how grafitti can be seen among fine art. For Tex, the other artist of the Dallas mural, it’s the scale of the painting that inspires him the most.

“We’re in this era where fine art is kind of crossing over into street art and it's getting out of the pretense of just graffiti and is essentially connected to the stigma of vandalism,” Tex said. “I think, a lot of the elements that people would do on a smaller scale for the gallery setting, it’s so cool to see it increased to the sides of buildings … You can stand in front of the Mona Lisa and get like this ‘wow factor’ … But seeing something so huge that when you stand in front of it, it makes you feel small. And I really think that's a really cool element of being able to produce stuff on this level for the public, I think they just see it in his own amazing wow factor also.” 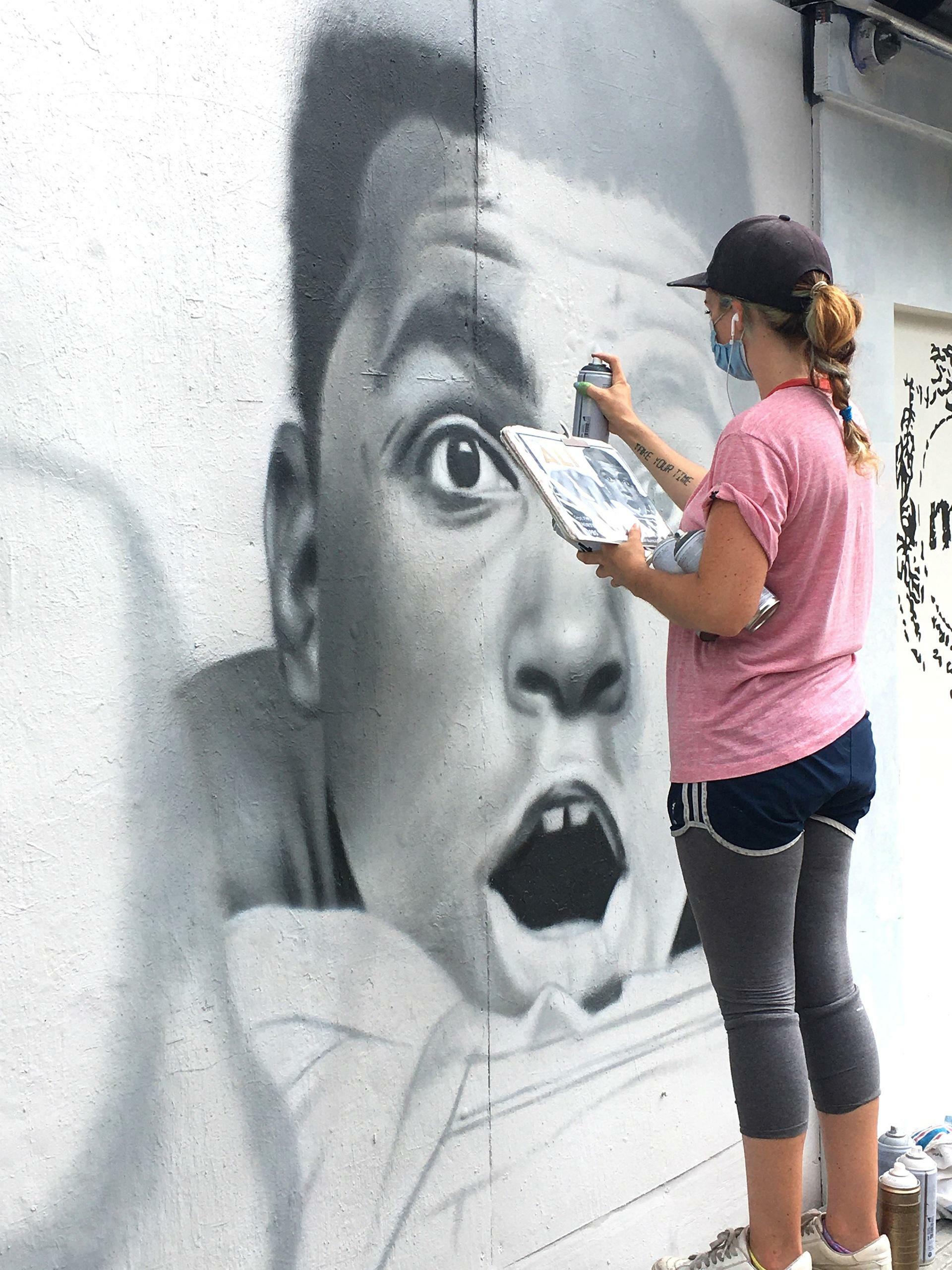 BK Foxx painted her mural on a busy corner in New York City for millions of people to see, but said art wasn’t always what she planned on doing with her life.

“For me, art was not a career choice," she said. "I was trying to figure out, like, what to actually do about it and I just happened to kind of find that.”

Finding art wasn’t a coincidence, and that shows through Foxx’s talent. She painted the mural entirely from a photo reference of Muhammad Ali, and like the other artists, put her own twist on it. It took around three days to complete the mural from start to finish.

While some of the other artists hope for specific responses from mural onlookers, Foxx just hopes people look at it. The responses she’s gotten so far are positive.

“Man, they’re really into it. It’s so recognizable and so many people have seen that picture, it’s his face straight on,” she said. “On that corner in New York City, millions of people even after COVID there’s still so many people everywhere in New York … Everyone has something to say.” 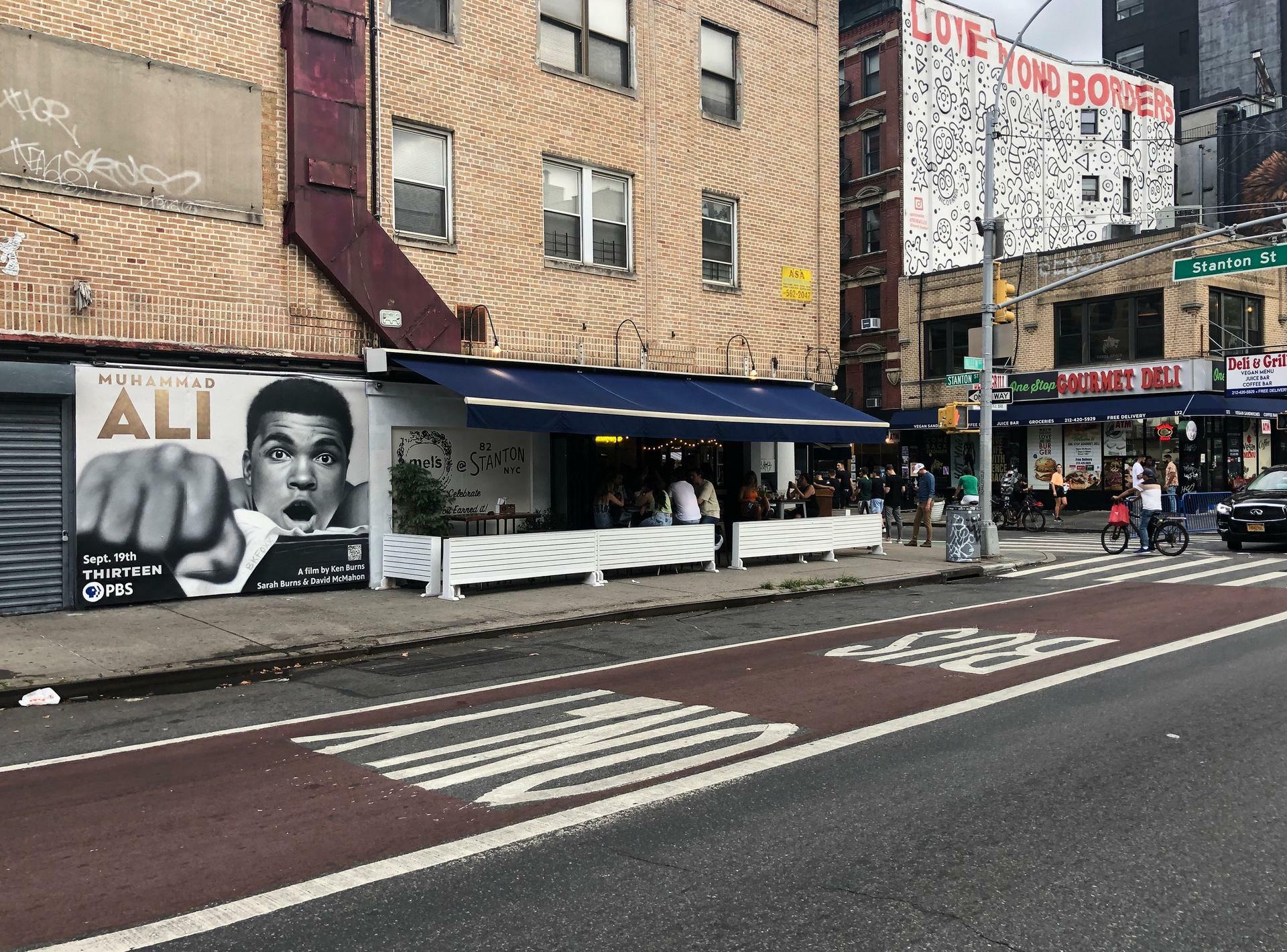 Just like fans have their own perspective on Muhammad Ali, each of these artists created their own rendition and painted versions of the athlete according to their perceptions of him. The murals and the documentary give onlookers the ability to discovery more about Ali’s career, both athletically and politically, while also learning about black history as a whole

Rahmaan Statik, the Chicago mural artist, is a self-proclaimed documentary buff, lover of Ken Burns and a Muhammad Ali fan. He hopes the mural inspires people to do their own research on Ali and his history.

“I hope the public will start doing some of the smart with their smartphone instead taking selfies and gossiping,” he said. “Do some research on Muhammad Ali, get their own perspective of him versus other people.”

Statik takes great pride in his work, but it’s not just the political angle he hopes sticks. Statik believes it’s all about the delivery of the message vs. how the message was delivered. 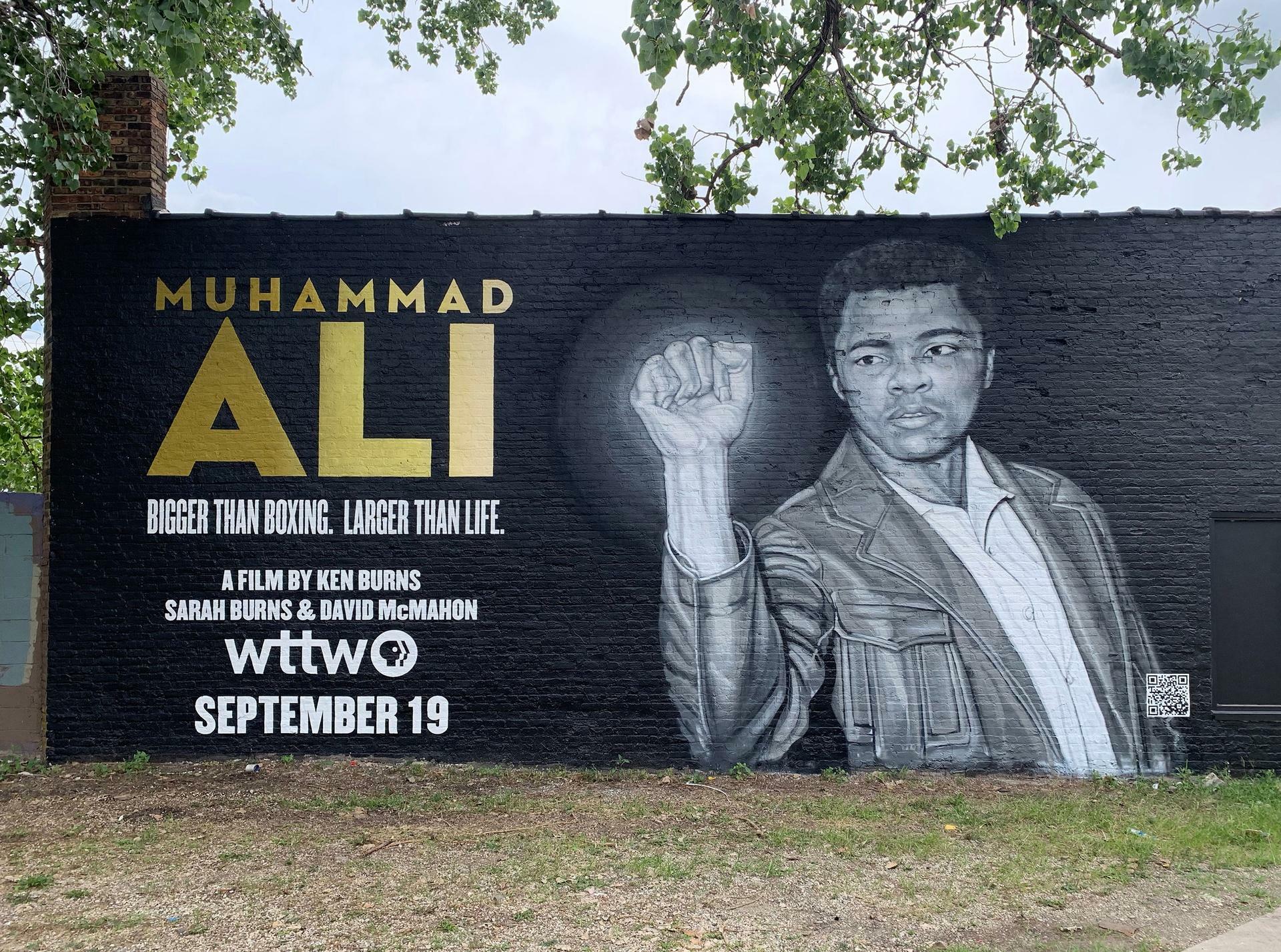 “There’s a difference between being a preacher on the soap box in the middle of the town square, yelling the gospel, or making the cool gospel song saying the same thing," he said. "What’s going to be more powerful, if you will? You know the dude who was on the soap box at the end of the day looks like some crazy person screaming. You take that same message and put it in music right there. People are gonna be automatically attracted to it because it's music. It has music, they're all hearing this music first, right? My theory is that I'm not gonna be on soapbox. Like if I had some wild radical statement in me, I really take it to my art, right? And that's my word. It's been put on record and it's there to stay.”

At the end of the day, the history of Muhammad Ali is about inclusion. As is the point of the four murals. Everyone has access to them. Each of them is different. Each mural is open to a different interpretation – Statik just hopes people interpret them.

“My point of empowerment is on bringing my work to the streets where it's not so exclusive and where anybody can see it,” Statik said. “Maybe one day people will get it.”

You can stream all four parts of Muhammad Ali by Ken Burns at PBS.org or on the PBS App. 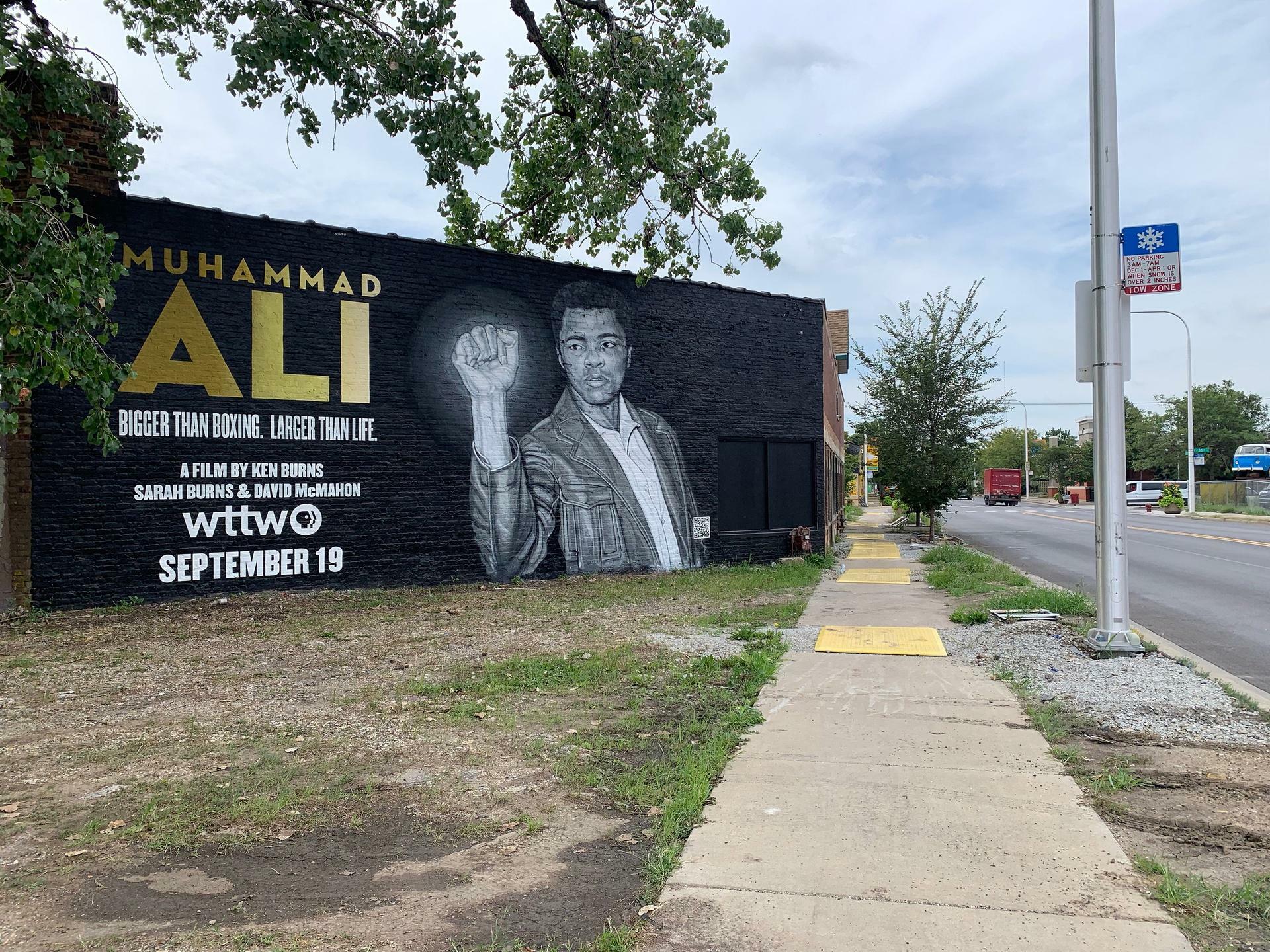 Fourth Mural in Los Angeles by Enk One 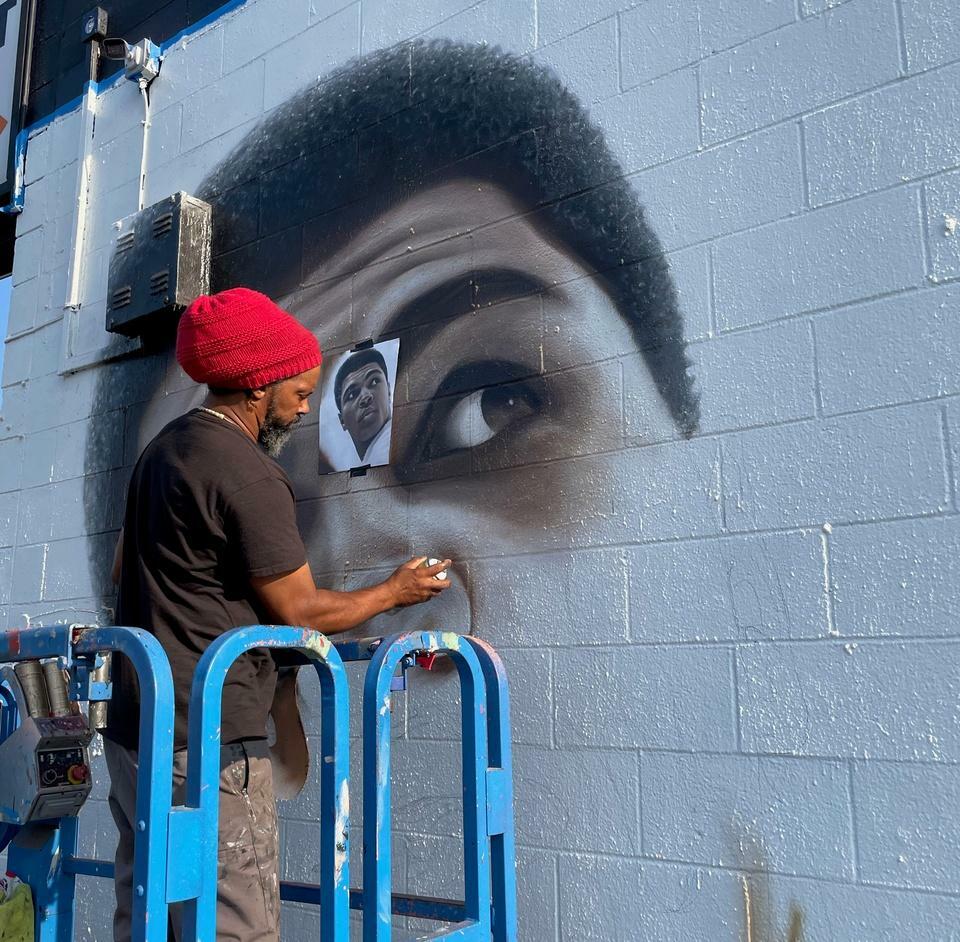 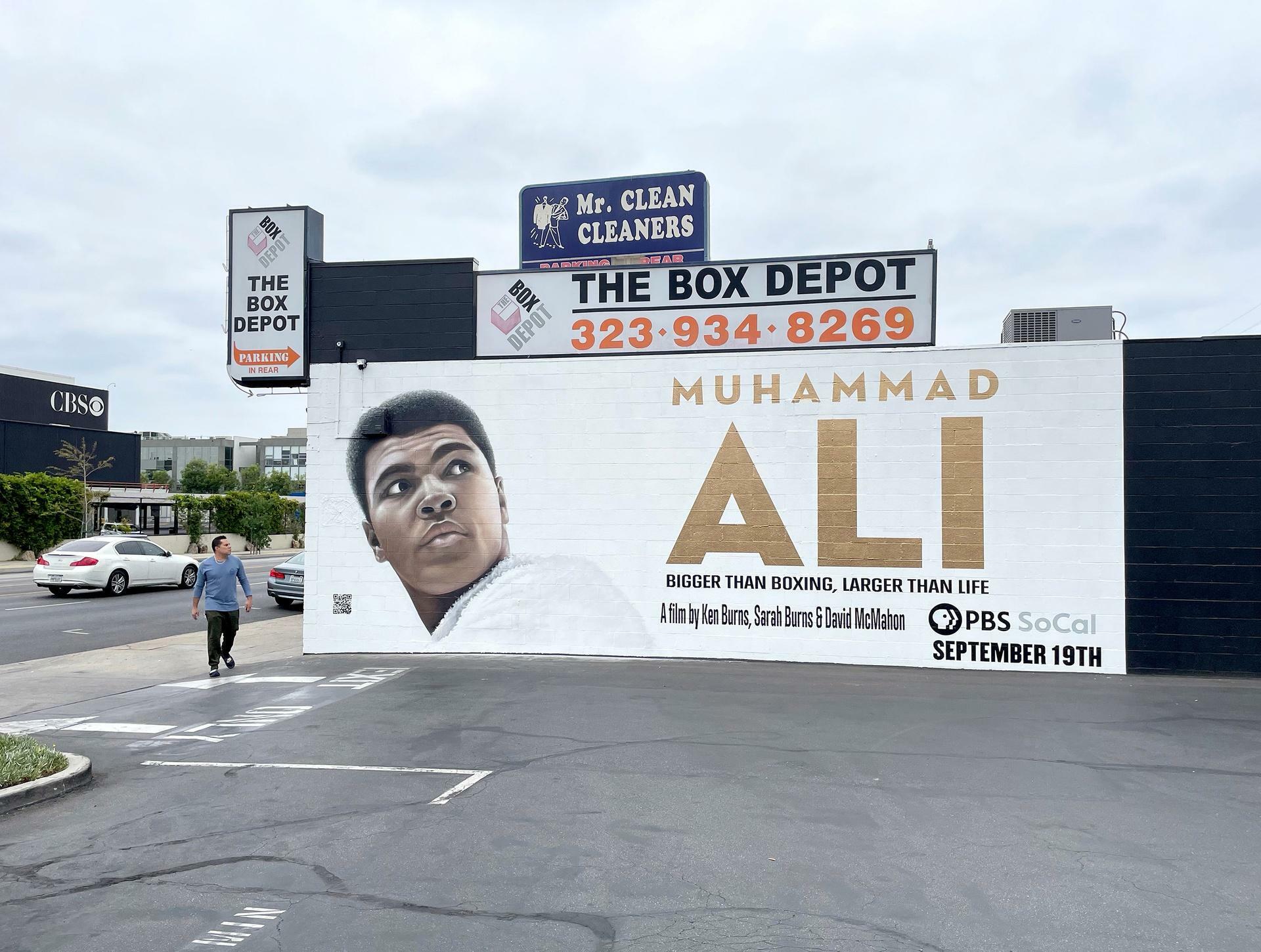