Posted by Emma Goddard on November 01, 2021
Warning: spoilers ahead. 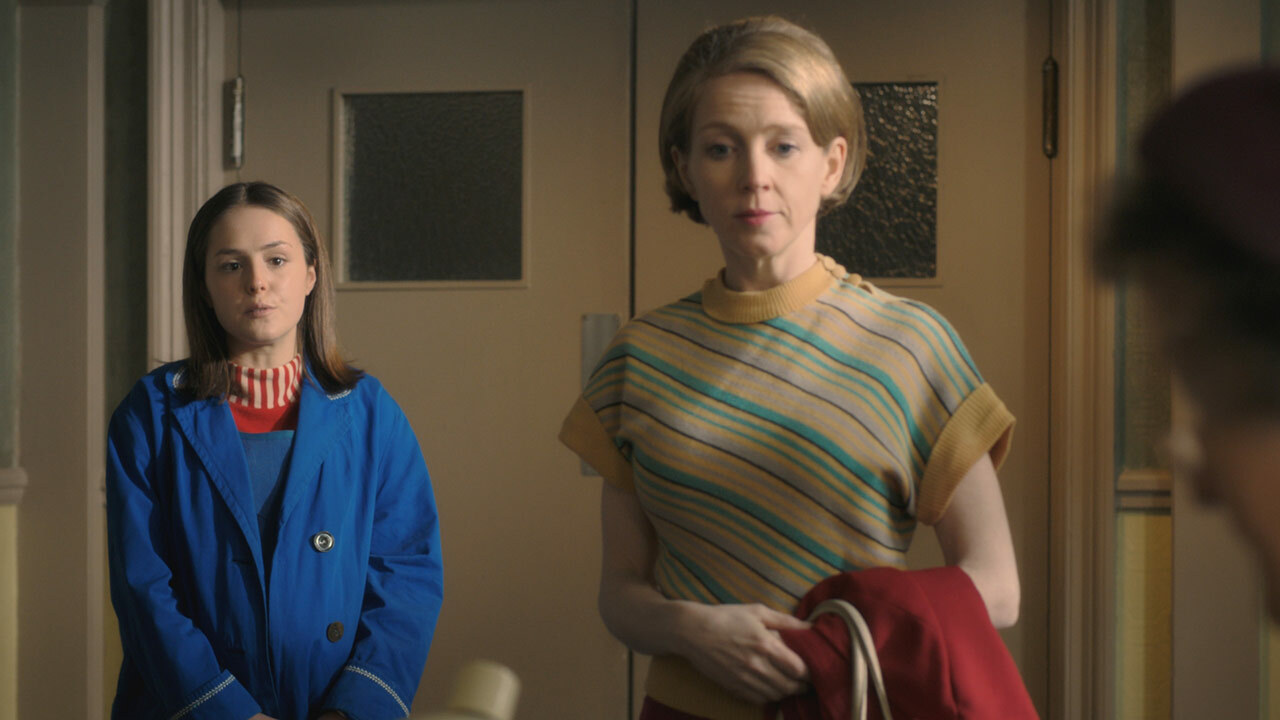 Jeanette and Doris Owen visit the clinic in a scene from episode 5. | Credit: Neal Street Productions

There’s a heatwave in Poplar, and the women of Nonnatus House are in the midst of their pupil midwife training. Though there have been some slight hiccups along the way (to be expected), the new program has been a welcome change for the house. Last week, we celebrated Cyril and Lucille’s engagement, and we return this episode where the festivities continue at the Turners’ house. This time, it’s Timothy Turner’s time to shine. It seems like only yesterday that Timothy was a young, angsty cub scout, but we’ve witnessed him grow up before our eyes and 10 seasons later, here we are! Now, he’s following in his father’s footsteps and is preparing to become a doctor after recently being accepted into medical school. Times are a-changin’ and we’re not sure if we’re ready.

This week, we meet Jeanette Owen and her mother Doris at Dr. Turner’s maternity home. The young teen is only weeks away from her delivery date, but is busy preparing for exams and the start of a new school year. With her mother’s help (or perhaps... hovering), she’s already planned out next steps for her baby’s adoption and a future that involves her continuing her academic studies at university. Despite the carefully mapped out plan for her life, not everything pans out how it should as she waits out her remaining weeks of pregnancy. Following some recent dizzy spells, she’s diagnosed with preeclampsia. Though this is common in teen mothers and first time pregnancies, Dr. Turner encourages Jeanette to stay at the maternity hospital until it’s time for her to deliver.

Making her rounds across Poplar, Sister Julienne visits Vera Sands, who’s pregnant with her second child. Blood pressure is normal and all is well with the expectant mother, but when Sister Julienne tries to interact with Vera’s daughter Elaine, there’s something troubling about the toddler’s demeanor. Staring off into the distance while in the living room playpen, Elaine is motionless during the visit and unresponsive to her surroundings, even when Sister Julienne attempts to play with her. Vera brushes it off as Elaine needing some fresh air, but even so, Sister Julienne takes her concerns to Dr. Turner. She fears that because Elaine is still in diapers, hasn’t walked and doesn’t speak, the child is behind on her development.

Later, during a follow-up visit at the antenatal clinic, Sister Julienne brings in Dr. Turner to evaluate Elaine. Despite the sneak attack intervention, Vera immediately acknowledges that she saw the signs early on. She admits that she was afraid to seek out help in hopes that Elaine was simply a slower learner and would eventually catch up to the other children her age. Still puzzled over a diagnosis, Dr. Turner wants to refer her to a specialist to complete more testing.

Following Vera and Elaine’s visit, Dr. Turner sifts through the Sands’ medical records alongside Timothy. Though Elaine’s birth was normal and she received all of her standard vaccinations, Dr. Turner notes that there’s no record of a PKU test. To be sure that he refers Elaine to the right specialist, he sends Sister Julienne to the Owens’ home again to perform a PKU test on her. Unfortunately, the result is positive, and just as Sister Julienne is leaving to deliver the results to Dr. Turner, Elaine has a seizure.

Following these events, Dr. Turner’s suspicions are confirmed. He meets with the Sands and explains that the seizure was likely a result of phenylketonuria, and that when Elaine was born, her body was unable to get rid of a chemical in her diet called phenylalanine. Now, after building up in her bloodstream, the condition has resulted in a harmful effect to her brain. Dr. Turner hopes that putting Elaine on a low protein diet and meeting with specialists will help with her progress, but there’s no guarantee. On top of all that, he also informs them that this condition might impact their next child as well.

Young Love and a Reunion

While the Sands consider all of Elaine’s treatment options, Jeanette has settled into Dr. Turner’s maternity home. During her stay, she bonds with Nancy who’s monitoring her during the remainder of her pregnancy. When they’re alone, she makes a request to the young nurse and asks if she can deliver a note to the baby’s father, Glen. She explains that she hasn’t been allowed to see him and hopes that he’ll visit. And visit he does.

As it turns out, Glen is Timothy’s acquaintance from their days as cub scouts and the young father runs into his old friend while he’s at the maternity hospital. The two reflect on their childhood and their plans for the future, and Timothy points him in the direction of the maternity ward. When Glen is finally alone with Jeanette, he asks if she really wants to give their baby up for adoption. Jeanette admits that she panicked when her family first discovered her pregnancy and told them it was what she wanted, but she seems to waiver when Glen tells her he wants to keep the baby. Unfortunately, their conversation is short-lived. When Doris returns to the maternity home and sees them together, she asks Nancy to remove Glen, and a question mark remains on the future of their child.

Over at Nonnatus House, Trixie hears from an old friend. Ring ring. It’s Matthew again. The new father calls the house in distress and asks for her advice on how to fire his nanny. He confesses that the two don’t see eye-to-eye and that he’d like to have more of a say in his son’s life (i.e. being able to nickname Jonathan Jonty without judgment).

After swinging by for assistance and seeing the state of the Aylwards’ home, Trixie agrees to help Matthew sift through candidate applications for a new caretaker. The pair interview multiple women recommended to them by a nanny agency, and finally land on a candidate that they both agree on. To express his gratitude for her help, Matthew thanks her by sending her a large plant on his and Jonty’s behalf. We’re not saying plants are the new flowers, but... 👀

Patient on the Loose

When we return to the maternity home, Jeanette has packed her bags and is ready to flee the premises following Glen’s visit. After her mother banned her boyfriend from the building (young love is rough sometimes), she hopes to find a safe haven at Glen’s family home. Miss Higgins attempts to stop her, but in an unfortunate turn of events, Jeanette exits the maternity home and falls down the stairs outside. It’s a terrifying moment as Jeanette realizes the impact this could have on the health of her baby, but when she’s safely brought back inside, Shelagh assures her that her baby is fine and Jeanette gets by with minor scrapes and bruises.

As if that weren’t traumatic enough, when Doris visits her later that day, Jeanette learns that her mother has recently spoken with the adoption society and that they have room in their nursery for Jeanette’s baby. This means that she’ll no longer have to stay in a mother and baby home while the society begins the search for the baby’s adoptive parents. Though Jeanette seems to have second thoughts following her visit with Glen, she doesn’t have time to argue when she goes into labor during their conversation. She does, however, make a statement by asking that her mother isn’t present during her delivery. Though the unexpected request is like an arrow to the heart, Doris agrees to this and even calls Glen to let him know Jeanette is in labor.

Mother-daughter differences aside, the delivery goes smoothly, and Jeanette gives birth to a healthy baby boy, which she names Oliver. Though Glen is immediately eager to hold his new baby boy, it’s harder for Doris, who leaves the room emotional and is unable to look at her new grandson. When Glen returns to the maternity home the next day, he shows Miss Higgins a baby book he plans to give to Jeanette so that she can document everything about Oliver when she leaves the maternity home. It’s a sweet gesture from the young father who’s unaware of Doris’ plans for his child. But when he heads into the maternity ward to see Jeanette, Doris arrives shortly after with an adoption society worker by her side. The scene is upsetting as Oliver is taken away from his birth parents with no warning or a true goodbye.

Later, as Jeanette tries to cope with the loss of her child, Doris attempts to mend things over with the promise of a clean slate and the delivery of Jeanette’s O-level results. Unsurprisingly, the future of academia is not at the top of Jeanette’s mind, and she’s still grieving the loss of a life that could have been with Oliver. Though she confirms she still plans to continue her path to university, Jeanette decides to take control of her future and tells her mother she’s going to start fresh with Glen, despite Doris’ objections.

When we conclude this episode, we return to the Sands’ home where Vera has gone into labor. Delivery goes well, but even upon their newborn’s arrival, Vera and George’s concerns about their son’s health still weigh heavy in the back of their minds. Luckily, their fears are put to rest with the arrival of Sister Julienne. When the midwife arrives for a postnatal check-in, she performs a PKU test with their son, and it’s good news for all: his blood test is negative! It’s a huge relief to the parents, and even better when they hear that Elaine is also responding positively to her new diet at St. Cuthbert’s. Though it’s not what they had originally envisioned for their family, their new life is looking a bit brighter already.

Forgot how we got here? Catch up on “Call the Midwife” with the Season 10, Episode 4 GIF Recap.

Emma Goddard is a Multiplatform Producer and self-appointed maker of baked goods at PBS. When she’s not busy writing about “Call the Midwife” and making GIFs (pronounced with a hard G, for anyone wondering) she builds websites for PBS shows and geeks out over British dramas.
SHARE
Previous Post

Making Their Own Choices