Posted by Emma Goddard on April 21, 2019
Warning: spoilers ahead. 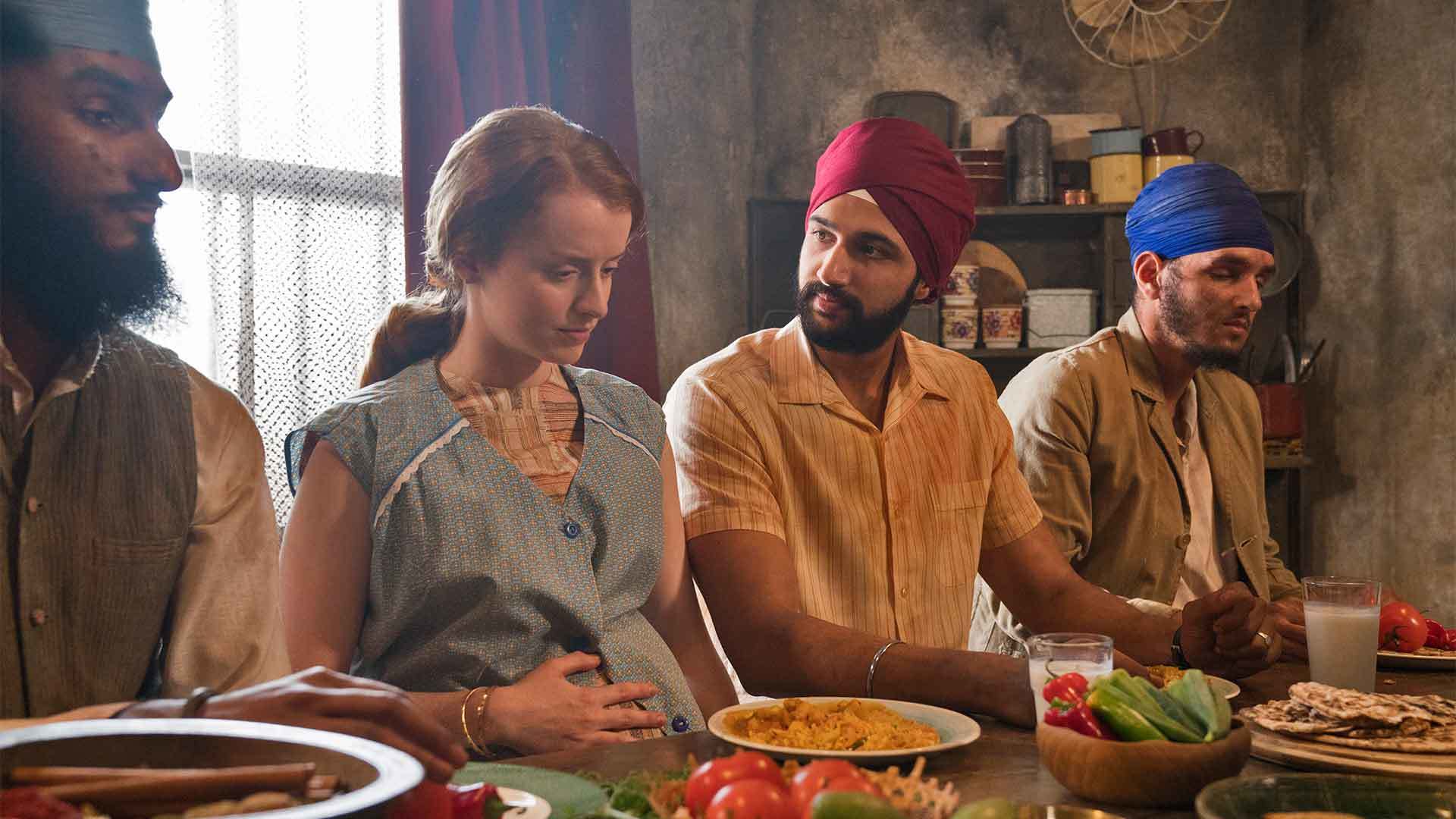 "Call the Midwife" Season 8 is rated TV-14. The plot points discussed in this episode recap contain mature content and may not be suitable for all audiences. Discretion is advised.

We blinked, and suddenly we’re halfway through the show that always gets us through our Sunday night scaries without fail. Oh how time flies when you’re busy wiping away tears after every episode of “Call the Midwife.” Now that we’re back, the sun is shining and Poplar is alive and well with activity for the summer. Last week’s episode left us misty-eyed, but unlike the rest of us, the midwives are breezing straight through the drama and right into Episode 4. Here. We. Go.

Trixie: midwife, hair extraordinaire, fashion guru, and part-time fitness instructor. As Poplar’s champion of good health, Trixie leads the women of the community in hula hoop lessons as they prepare to host East London’s annual Keep Fit Jamboree. Jeannie Tennant joins the ensemble and happens to be the class’ star pupil and master of the untraditional core workout meets… dance class? ¯\_(ツ)_/¯ Naturally, she is also a pivotal character for this week’s episode.

A Mother and Daughter Feud

Meanwhile, drama unfolds at the maternity clinic as we’re introduced to Cilla Singh and her mother Enid Wilson. Both pregnant at the same time — it’s cool, nothing to see here — the pair have been at odds over Cilla’s marriage to her husband Pardeep Singh. Enid doesn’t approve of her daughter’s choice in life partner and Cilla could not care less because *love*.

Caught in the Middle

As mother and daughter struggle to find common ground when they should be celebrating their upcoming births together, Sister Julienne and Shelagh, their respective midwives, attempt to mend things between them. After all, babies should be born in stress-free environments and this situation has stress written all over it. We can already feel the knots in our back. During a house call, Sister Julienne tries to convince Enid to reach out to Cilla, but she’s stubborn and refuses.

While Cilla and Enid’s relationship remains on the rocks, Trixie is deep into hula hoop performance prep. She meets up with Jeannie to help her with a dress fitting and takes note of some unusual behavior that she’s been displaying. After Jeannie had a dizzy spell during one of their rehearsals, she’s now been experiencing excessive salivation. Trixie mentions that the combination of these symptoms might be an early sign of pregnancy. With a sheer look of terror across her face at this suggestion, Jeannie quickly dismisses the idea, adding that she’s taken proper precautions.

With due dates drawing near, the strain of Cilla and Enid’s relationship is enough for Sister Julienne to intervene and have a sit down with Enid to determine the cause of the problem. Since Sister Julienne is everyone’s unofficial therapist (maybe it’s her calm demeanor or gentle, ASMR style voice, but who’s to say), Enid opens up to her about her opposition to Pardeep. She claims she’s worried about Cilla’s living conditions and wonders why her daughter traded all that she had for this relationship. The answer is love, Enid!

From one family’s problems to the next, Jeannie leaves an emotional appointment with Trixie to relay the information of her pregnancy to her husband Frank. He’s caught off guard when Jeannie suggests the possibility of an abortion.

He angrily protests, but Jeannie secretly proceeds with her plans and meets with Dr. Turner for his help. Since abortion is illegal unless a mother’s life is in jeopardy, Dr. Turner’s only option is to turn her away. Hitting a wall both at home and at the doctor’s office, Jeannie finds herself in a moment of desperation and turns to her next plan. Drawing on the storylines from Episode 1 of this season, when Cath Hindman experienced abortion complications so severe that it resulted in permanent infertility, Jeannie resorts to an illegal abortion.

Meanwhile, the Singhs are running into medical problems of their own. After numerous clinic visits and midwife house calls, Cilla’s blood pressure readings continue to fluctuate, raising a red flag for Shelagh and the rest of the team. She advises Cilla to stay at the maternity home for the remainder of her pregnancy and in an unexpected twist of fate, Enid ends up in the bed right across from her. Two thumbs up for awkward family reunions!

As it turns out, family tension is the least of Cilla’s worries as she begins to go into labor and complains of head pains and issues with her vision. With her up and down blood pressure results, Dr. Turner concludes that she’s experiencing toxemia, a condition that her mother also had during her pregnancy when delivering Cilla. A flying squad is called in to have her transferred but Dr. Turner and the midwives ultimately decide to proceed at the maternity home while Cilla is sedated.

While she’s in delivery, Enid and Pardeep are forced together as they wait for baby to be born. In this shared moment of fear for the person they love, Enid’s previous conversations with Sister Julienne start to resonate with her. She recognizes that despite their differences, the health and happiness of the people she loves is all that matters. While the family waits for Cilla to recover, Enid helps watch over her new grandson. Her nights bonding with him slowly begins to melt her heart, as the presence of a baby will do to anyone who doesn’t have a heart made of stone, and it further aids in her acceptance of Cilla and Pardeep’s lifestyle and marriage.

Elsewhere, we return to Jeannie following her visit to an illegal abortion service. Sadly, not long after the procedure, she shows signs of illness, which she tries to play off as bad pregnancy pains. When Frank makes his way home, he sees that Jeannie is extremely feverish, and while she’s still conscious when Dr. Turner is called to the house, she admits that she had the abortion, which resulted in a nasty infection. Despite Dr. Turner’s best efforts to make sure Jeannie is responsive as an ambulance rushes her to the hospital, the infection has already caused too much damage and she passes before they arrive for medical help, leaving behind Frank and their two children.

As news of Jeannie’s passing reaches the midwives, questions arise when Sister Frances notes that similar to Cath Hindman, Jeannie also had streptococcus infection from her abortion. Now that they have a death on their hands, Sgt. Woolf gets involved as the team searches for clues to uncover the woman who has been offering these illegal and life threatening services. Unfortunately, with so much secrecy surrounding her, all that they know so far is how much she charges the women who come to her, as evidenced by the money Jeannie took from her family savings. While it’s not much to go on, we hope for the sake of Poplar and the Nonnatans that they catch this woman soon!

At the maternity home, Cilla comes to, and she and her mother finally reconcile. Enid apologizes to Cilla and Pardeep for losing sight of what was truly important, but Cilla is quick to forgive her as a new mother who now understands the lengths that a parent will go to, to protect their child. Soon after, Enid also goes into labor with Cilla nearby for emotional support, and she delivers another daughter. A second cause of celebration for this family, it’s the heartwarming story that we needed to end this fairly gloomy episode.

While the status of the illegal abortions that have cast a shadow over Poplar remain in limbo, the women do their best to move forward. In honor of Jeannie’s memory, they continue with their performance for the local jamboree, though Trixie and the girls agree that it’s not the same without her. Woof. The events of this episode sucker punched us right in the gut, but there’s no turning back now that we’ve come so far. So, here’s to running our way to Episode 5 for some — hopefully? — cheerful news.

From Thirteen.org | The British Tele Dish.

From NPT Nashville | The Vanderbilt University School of Nursing Recap

Emma Goddard is a Multiplatform Producer and self-appointed maker of baked goods at PBS. When she’s not busy writing about “Call the Midwife” and making GIFs (pronounced with a hard G, for anyone wondering) she builds websites for PBS shows and geeks out over British dramas.
SHARE
Previous Post

Life Bound Up in Mysteries