Posted by Emma Goddard on April 13, 2020
Warning: spoilers ahead. 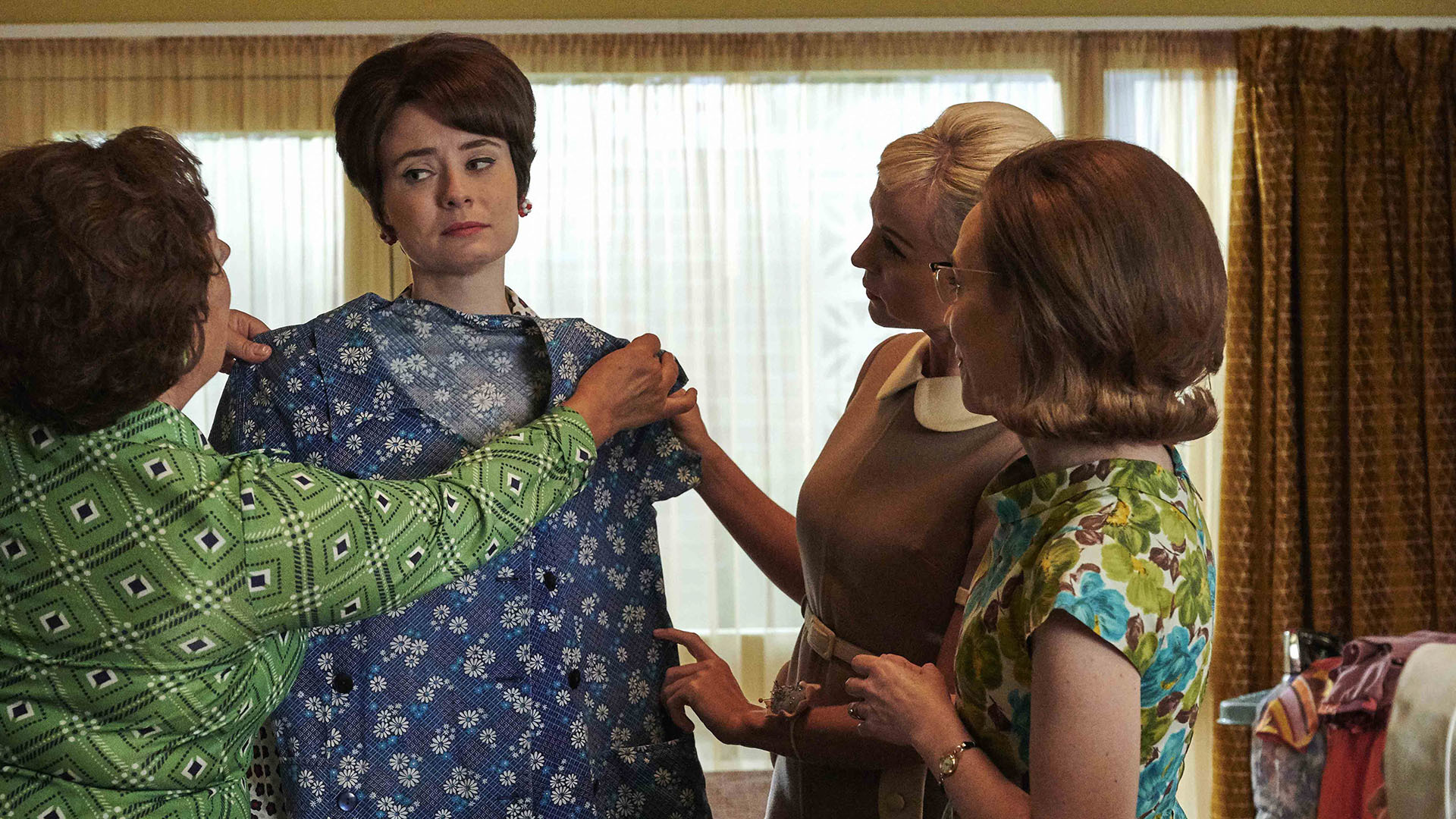 Spring has sprung and the month of May spreads sunshine and good vibes across the city. As we return to Poplar for Episode 3, the women are in the midst of organizing a fashion show using upcycled clothing to raise money for an incubator, and love is in the air once more as we reunite with Cyril Robinson.

It feels like a lifetime since we last caught up with Lucille’s handsome beau, but fear not because he’s back, and he hasn’t arrived empty handed. A gentleman as always, he makes his season entrance with a bouquet of flowers to pick up Lucille for an evening outing. With his civil engineering examinations coming to a close, the two have planned a celebratory night together, but when he arrives at Nonnatus House he’s greeted by Sister Monica Joan. Not the type to turn down some quality time with his #1 fan and #1 in our hearts, he takes Sister Monica Joan up on her offer to wait for Lucille, but soon realizes she won’t be home in time for their special date.

Though kind-hearted Cyril is understanding when Lucille explains she was delayed by a patient’s labor, with her busy schedule and Cyril’s classes, their quality time together is taking a hit. The pair take a rain check on dinner for a later date, but the next day, Lucille is immediately called in to St. Cuthbert’s to help supervise midwives in training. While everyone agrees that the experience of supervising at a large teaching hospital will be a helpful addition to Lucille’s skills, she worries that with this new role she won’t be able to find time for her BAE. We’re big supporters of Cyril, and quite frankly our hearts can’t handle another breakup on this show, so we’re rooting for you, Lucille! Also, RIP Trixtopher.

As Lucille begins her new routine, Phyllis drops by St. Wilbur’s School to make sure the local students have received their vaccinations. After all, they don’t want a repeat of that Episode 1 diphtheria outbreak - or any other outbreak for that matter. During her visit, she meets Rahul and Jalal Mohammed, two brothers who have recently moved to the area from Pakistan. After discussing their arrival with their teacher, Miss Graham, Phyllis’ curiosity grows when she learns that both of their parents have remained mostly absent from their school pickups and dropoffs.

To ensure that the boys are being properly cared for, she visits the Mohammeds’ home and is immediately greeted by Rahul and Jalal, followed by their mother Farzina. As she enters the apartment, Phyllis is struck by a strong, overwhelming smell of urine and becomes increasingly concerned when she observes Farzina’s physical discomfort along with visible sores along her legs.

It’s not long before she realizes that the boys’ mother has been suffering from a painful bladder infection paired with incontinence, and she’s flabbergasted when she hears Farzina’s husband has moved out because he couldn’t bear the malodor, accusing her of being “dirty” before his departure. So much for supportive spouses and wedding vows 😬. Seeing the terrible state that Farzina is in, Phyllis requests Dr. Turner’s medical help, hoping that with both of them there, Farzina will better understand that this isn’t her fault.

Over at the hospital, things are off to a rough start when Lucille meets her first patient, Connie Blair. Unfriendly? That’s an understatement. Though it’s sadly not the first time Lucille has been subjected to racism and prejudice during her time on the job, tensions are high during their introduction when Connie questions Lucille’s authority in the ward, and continues to talk over her to the pupil midwife Lucille has been supervising. Despite her combativeness, Lucille refuses to let it get the best of her. She knows her job is to maintain the safety and health of all of her expecting mothers, regardless of their feelings or treatment toward her.

Night on the Town

Beyond her hostile first encounter with Connie, Lucille is able to settle into work at the hospital and has a great relationship with her staff and the rest of her patients. She even manages to carve out some time to go on that date with Cyril! He surprises her with all the comforts of home by bringing her to a restaurant that serves Caribbean food and tells her that he’s recently felt a calling to start preaching at church, all of which is a welcoming distraction from St. Cuthbert’s. A+ boyfriend.

When we return to the Mohammeds, Phyllis has notified Dr. Turner of Farzina’s condition and explains that she hasn’t been outside in weeks, since the family first moved to England. He accompanies Phyllis to the home, and it’s then that they learn that Farzina experienced complications with her last pregnancy in Pakistan, which resulted in both the loss of her daughter during labor and her current infections. Recognizing how long she’s been enduring both the emotional and physical traumas of her last delivery, Phyllis and Dr. Turner insist that she has an examination. Fearful, she continues to refuse treatment.

When Lucille returns to the hospital, she mentally prepares herself for Connie’s wrath, but becomes increasingly frustrated with the way Connie disrespects her. The expecting mother tries to deny Lucille’s help and acts as her superior, but when aching pains in her back persist, she finally allows Lucille to examine her. When Lucille feels Connie’s abdomen, she discovers that Connie is showing signs of her first contractions.

Across town, Phyllis is busy tracking down Ayub Mohammed following her unsuccessful visit with Farzina and Dr. Turner. With the help of the couple’s sons, she calls on him to help communicate how important it is that Farzina seek immediate medical attention. While he’s wary of joining, he accompanies Phyllis to the family’s home to carry out his responsibilities as a father and husband.

During this conversation between husband and wife, Farzina openly berates Ayub for abandoning their family (rightly so) after moving them across the world and for neglecting her when she needed help. He says that he felt ashamed after the death of their third child, but Farzina throws that card right back at him. Ayub starts to see the error of his ways, and when he learns Farzina could go into kidney failure, he pleads with her to let Phyllis and Dr. Turner assist with her pain, not only for their sons but because he needs her as well. Accepting his apology and the idea of them being a family again (which is very generous of her, just saying), Farzina agrees to a home examination from Phyllis.

During the examination, Phyllis observes infected sores, excoriation and signs of incontinence. From another room, Dr. Turner notes that Farzina might have a fissure, a potential UTI and a fistula, an opening between her birth canal and bladder. He explains that when Farzina was in Pakistan, she must have been in labor too long, which prevented her daughter from moving and caused her injuries. The only option to relieve her pain is to move forward with surgery, and while reluctant she chooses to go to the hospital requesting that her new friend Phyllis is by her side.

Later, as Farzina prepares for the procedure, Ayub meets with Dr. Turner privately and admits that he wasn’t aware of her injuries. He mentions that Farzina had been on a boat for several weeks and when they were finally reunited in England he was taken aback by the odor caused by her illness and didn’t know how to handle the situation out of fear. Of course, Dr. Turner doesn’t take this excuse lightly, and doesn’t allow Ayub to forget that he still abandoned Farzina without seeking help or even communicating with her. Despite all this, Farzina reconciles with Ayub and has a successful surgery, finally comfortable in her own skin again. So I guess we’re happy if she’s happy?

Trapped with the Enemy

In another wing of the hospital, three quarters dilated and quickly progressing, Connie is ready for the birth of her third child. As her supervising midwife, Lucille helps transfer her to the delivery room on a different floor of the hospital, but as they’re making their way down, the hospital elevator stalls unexpectedly between two floors. The fire brigade arrives at the scene but they’re unable to open the jammed door or fix the lift before Connie delivers. It is a true nightmare for both women, but as a professional, Lucille gets down to business.

Out of options, Lucille relies on the help of the firemen and her pupil midwife to pass her a delivery kit and syntometrine through the elevator doors to safely deliver Connie’s baby. Calm as she always is despite the danger they’re both in, Lucille coaches Connie through her labor and safely delivers her new daughter. Relieved and overjoyed once her baby girl is in her arms, Connie recognizes how safe Lucille made her feel throughout the process and admits that she treated Lucille poorly. In a familiar theme this episode, Connie explains that she lashed out at Lucille out of fear, unhappy and scared to be at a hospital where she couldn’t control her surroundings. When the lift finally moves and the women are rescued, Lucille and Connie part on good terms.

While Ayub and Connie’s actions aren’t 100% excusable, as this episode closes, Phyllis and Lucille help set their patients on the right path forward. We can always count on the midwives to make a lasting impact on the men and women they meet, changing Poplar for the better. On to the next!

Forgot how we got here? Catch up on “Call the Midwife” with the Season 9, Episode 2 GIF recap.

Emma Goddard is a Multiplatform Production Manager at PBS. When she’s not busy writing about “Call the Midwife” and making GIFs (pronounced with a hard G, for anyone wondering) she builds websites for PBS shows and geeks out over British dramas.
SHARE
Previous Post