'The Bonds, However Delicate, Were Perfect'

Posted by Michelle Collins on May 04, 2020
Spoiler Alert: This post discusses events in Season 9 Episode 6. 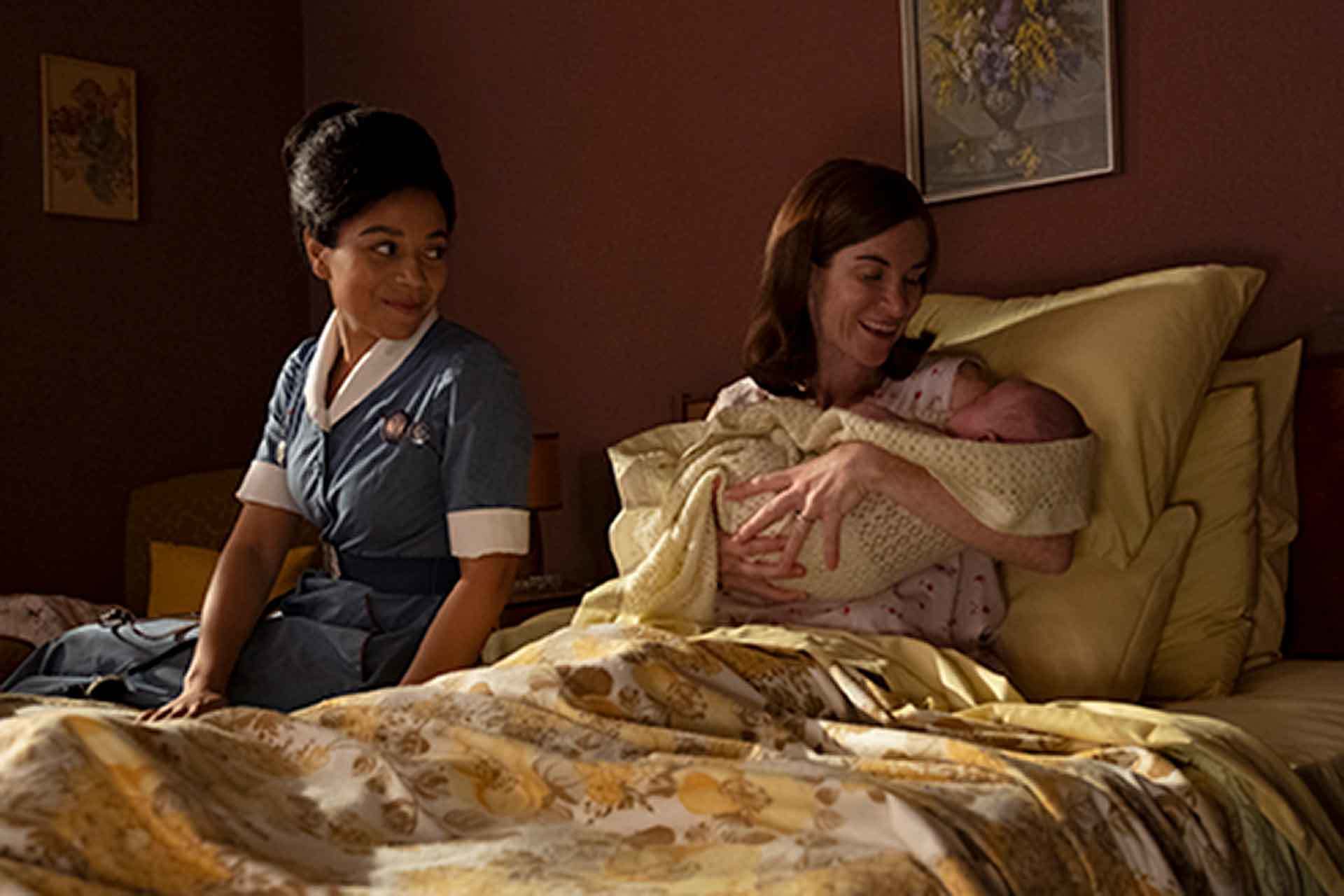 Over the years I have had the opportunity to hear a certain speaker, on a number of occasions, whom I would describe as captivating. He has a method where he starts his addresses with three seemingly unrelated single words, and then weaves the words into the tale that he spins for the listener, tying them somehow together by the time he reaches the end of his words. I’m taking his lead with this week’s blog so here goes: apples, power, and rituals. Ponder on that for a moment…

In this episode it started out with us watching Mrs. O’Bryant try to induce her labor with castor oil, which is an unpleasant tonic with even more unpleasant side effects. Over the centuries women have, and still do, try any number of herbs, tonics, and practices to expedite labor. Some of these practices are harmless and do absolutely nothing to help instigate the onset of labor (like walking endlessly - walking once in actual labor helps to shorten the labor, but racking up miles when not in labor will just tire you out). Other practices, herbs, tonics, etc. are frankly just dangerous for both mother and baby (like the herb black cohosh, which has been associated with intrauterine fetal stroke and death).

One of the first obstetricians with whom I worked was an older gentleman who had been practicing probably 60 years by the time I met him. While it became more widely practiced, over the years I worked with him, to induce labor, his labor induction rate remained both very low and steady. When the inevitable situation of one of his very pregnant patients would approach him requesting an elective induction of labor (i.e. an induction wherein there is no medical reason for doing so) recounting how her friends and sisters had been induced and everything “went just fine”, he would repeat a simple line; “the apple will fall from the tree when it’s ripe.” Perhaps a bit patronizing sounding, and even what some would think is dismissive, there was indeed a good bit of wisdom in those words. He knew what many of us midwives have long believed; that is that we can’t outdo Mother Nature. As much as we have evolved over time with technology and science and tried to improve on birth, the truth is that birth hasn’t changed at all in eons of time; it still happens by the same process that it did thousands of years ago.

The phenomenon of being able to choose the day that one goes into labor has been touted as what feminist, empowered women should do to maintain control over the birth process. The irony of that though, is that when women circumvent their body’s own timetable for labor, they are actually relinquishing their power – their power as a goddess to create life, and to usher that life into being when it is time. I am certainly not saying that induction of labor is never warranted; there are circumstances when it is certainly safer for mother and baby with baby outside, rather than inside, the womb. My assumption is that people have no idea of what must occur in a woman’s body for labor to ensue, and what a big deal it is to sidestep that. Several hormones in a woman’s body “shift” somewhat in preparation for labor, for one thing.

Endorphins, which are morphine like substances that we produce internally, are natural pain fighting chemicals that are on board to help us through pain – including the  pain of labor. We all have the capability to increase endorphin production; exercise makes the runner feel good (i.e. the “runner’s high”) because of endorphins. In fact, the amount of circulating endorphins in a laboring woman’s body is 40 times greater than at any other time in her life. So many other important hormonal changes occur prior to labor onset; the baby even sends a biochemical message, via the substance that enhances its own lung development, to tell its mother that the lungs are “good to go” and to signal hormonal changes that will begin labor. What do we gain when we bypass such important biologic processes? Even more important, what harm do we do by circumventing such important processes? I am not joking when I tell students that my least favorite place to be is at a baby shower. Inevitably the conversations turn to the birth experiences of those present and then, unavoidably, to how “great” induction of labor is because it allows us to choose the date the baby is born… and on and on and on. What is torturous for me is that I am usually always stuck seated smack dab amidst said discussion. For those who know me, they will not find this amazing at all – that the torture for me is sitting there, in silence, biting my tongue as I try not to insert my (albeit probably unpopular) opinion on such matters.

The third word… rituals… every society has rituals around birth and death. Rituals are important; they help us cope, keep us grounded in times of both celebration and grief; they connect us to the past, providing solace and stability. In this episode we watched a young family, replete with joy at the birth of their newborn baby boy, fall into the depths of first disbelief, then despair, over the news that their baby has a fatal heart condition caused by his mother’s infection with rubella (also known as German measles) during pregnancy. They take baby home, make memories with him and their other children together in the short time that they have, and spend every last minute just loving on him. They capture the brief moments in time with photographs which they so kindly share with Nurse Anderson (Leonie Elliott) at the episode’s end.

In maternity settings, we try to preserve memories for parents of babies who will not go home in their parent’s arms. A lock of hair, a hand and footprint, pictures in lovely white gowns… all of these things can ease a parent’s grief now and every birthday in the future that they pull them out to remember, and to grieve. When people hear what any birth worker does, they inevitably comment on how “happy” our work must be. Yes, it is definitely a glorious place to be – amidst birth – the vast majority of the time. When it is sad, though, it is the saddest of places in which to be.

I will never forget those births I have attended where babies were born silent and still. The vision of one young mother, in particular, as I entered her room at the end of my shift to say goodbye, sat cradling her sweet child, born silent several hours earlier; her husband sitting quietly at her side, lost in his own grief. She looked up at me, tears sliding down her cheeks, and said “I just don’t know how to say goodbye”. I had no words of wisdom; I had no words at all. I could only embrace her in silence. Yes, we who catch babies remember the babies – both screaming and silent – who pass through our hands.

Jenny Lee’s words at the end of the episode remind us of that; “Flowers take many forms; each one has its story, and its roots. Each one unfurls from its bulb revealing itself and its promise, as it will. Each is entirely precious, and unique; each is the best, and the only. Each will linger in the mind; each will teach us what it is to love, to be torn, to nurture, and to let go. Not every garden blooms as we expected, despite our care; not every child can thrive; tears take the place of rain and the sunshine fails us. But the bonds however delicate were perfect, they were real, and their fleeting sense will live forever on the air. “