What it's Like to Film a Birth in Call the Midwife

Terri Coates is a practicing midwife and lecturer and serves as the Midwifery Adviser to Call the Midwife.

The last episode of Call the Midwife season 6 brought together contraception, birth, marriage and a death in an emotional series finale. Barbara's wedding preparations included a visit to secure a contraceptive cap and a more challenging story about a young mother taking the oral contraceptive pill and then succumbing to a deep vein thrombosis. The contraceptive pills used in the 1960s had very different formulations compared to the modern equivalent. They contained very high levels of hormones and consequently, the risks were much greater.

The birth of Shelagh's baby has been anticipated for almost the entire series and we watched the bump expand. But first, the labor. 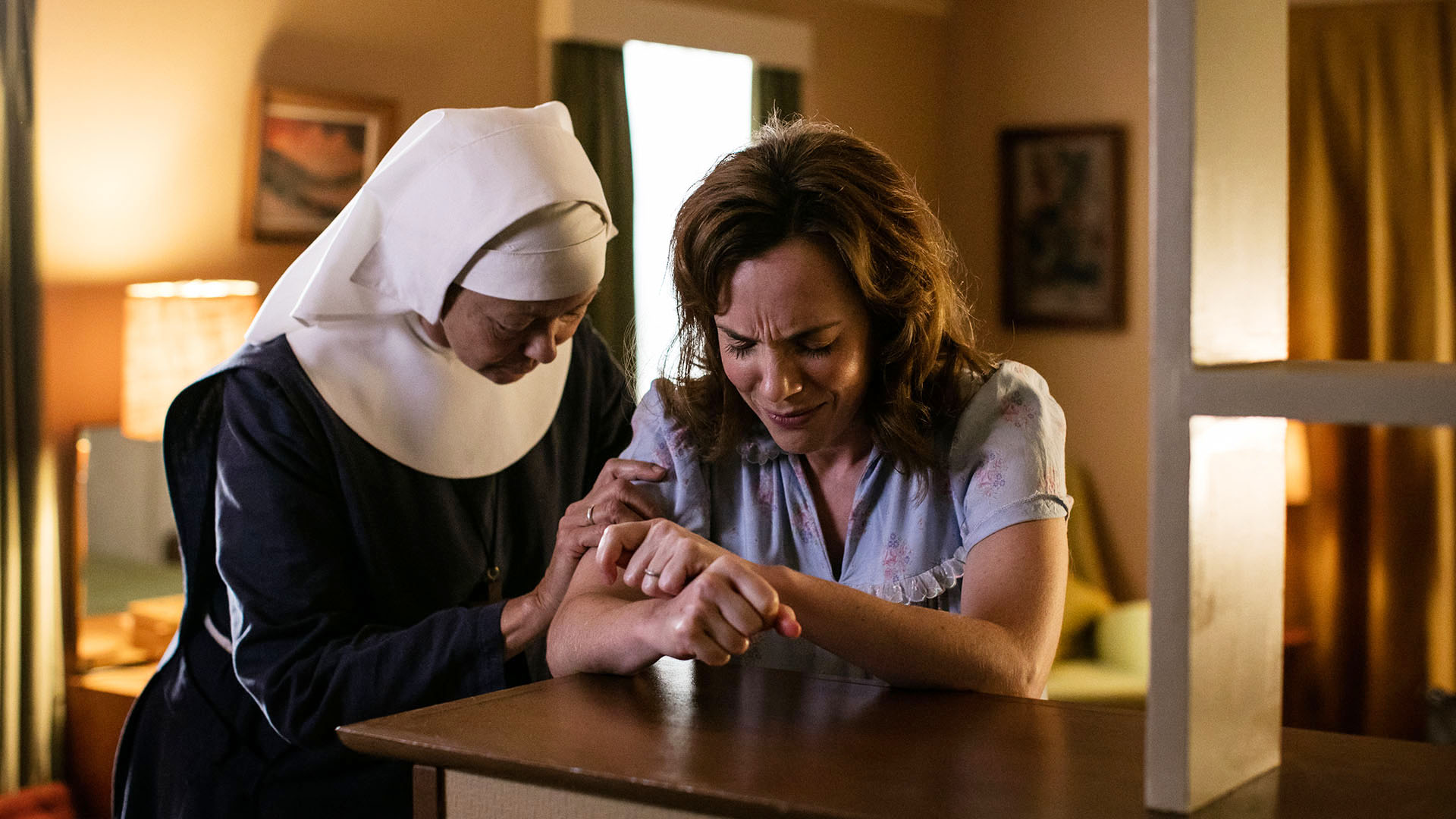 Demonstrating the progress of a long labor within an hour long episode doesn't necessarily make for a riveting end of season finale and isn't what fans want, though I suspect it is what people who don't usually watch Call the Midwife think we do. The progress of a labor can only be seen in short scenes woven into the other stories depicting the highs and lows.

Laura Main, who plays Shelagh, was keen to portray her character's pregnancy and labor authentically, so we took the time to rehearse body language and comfort positions that a pregnant woman might adopt day to day and the discomforts of pregnancy. For this episode particularly, we worked through the sensations and levels of pain her character might experience in a long labor. Rehearsals continued on set until just before each scene was filmed.

A complex labor and birth may make for a dramatic screenplay, but as midwives and mothers know, not all labor is dramatic: it's mostly just plain exhausting. So advising the writer to portray a long, tiring, frankly unglamorous, normal labor may seem unlikely, but when creating Call the Midwife, the team portrays difficult stories on screen every episode.

For Shelagh we wanted to show normal progress of labor of an older primigravid (first time) mother when the baby is believed to be in a posterior position. This is likely to be a long and uncomfortable labor. Midwifery colleagues understand that those providing care may also become fatigued.

Constrained by a film set and only a few minutes to describe each phase, we see Shelagh become aware that she's in the early stage of labor and call her chosen midwife. Sister Julienne arrives and confirms that Shelagh's midwife's instincts were correct, the labor is underway and the baby is probably in a posterior position. That's sufficient to make any midwife want to go and have a little preparatory nap.

The labor progresses, and as the strength and length of the contractions are evident, so too is the desire for comfort. Sister Julienne provides human contact and encourages upright positions. Labor isn't always easy and we know some mothers will require pharmacological support. The choices then were few, but in the UK, a midwife would carry Pethidine and Nitrous Oxide (gas), and we see all options in use, and the side effects, in Call the Midwife.

Watching Sister Julienne help Shelagh maintain sufficient stores of energy and a positive outlook demonstrates textbook levels of midwifery care. We see the appropriate use of pain control, the use of physical support and upright positions to aid rotation and descent and singing to control breathing and release endorphins. All of the techniques described are demonstrated in short scenes, and I advise the writer and director on appropriate midwifery to portrayal. 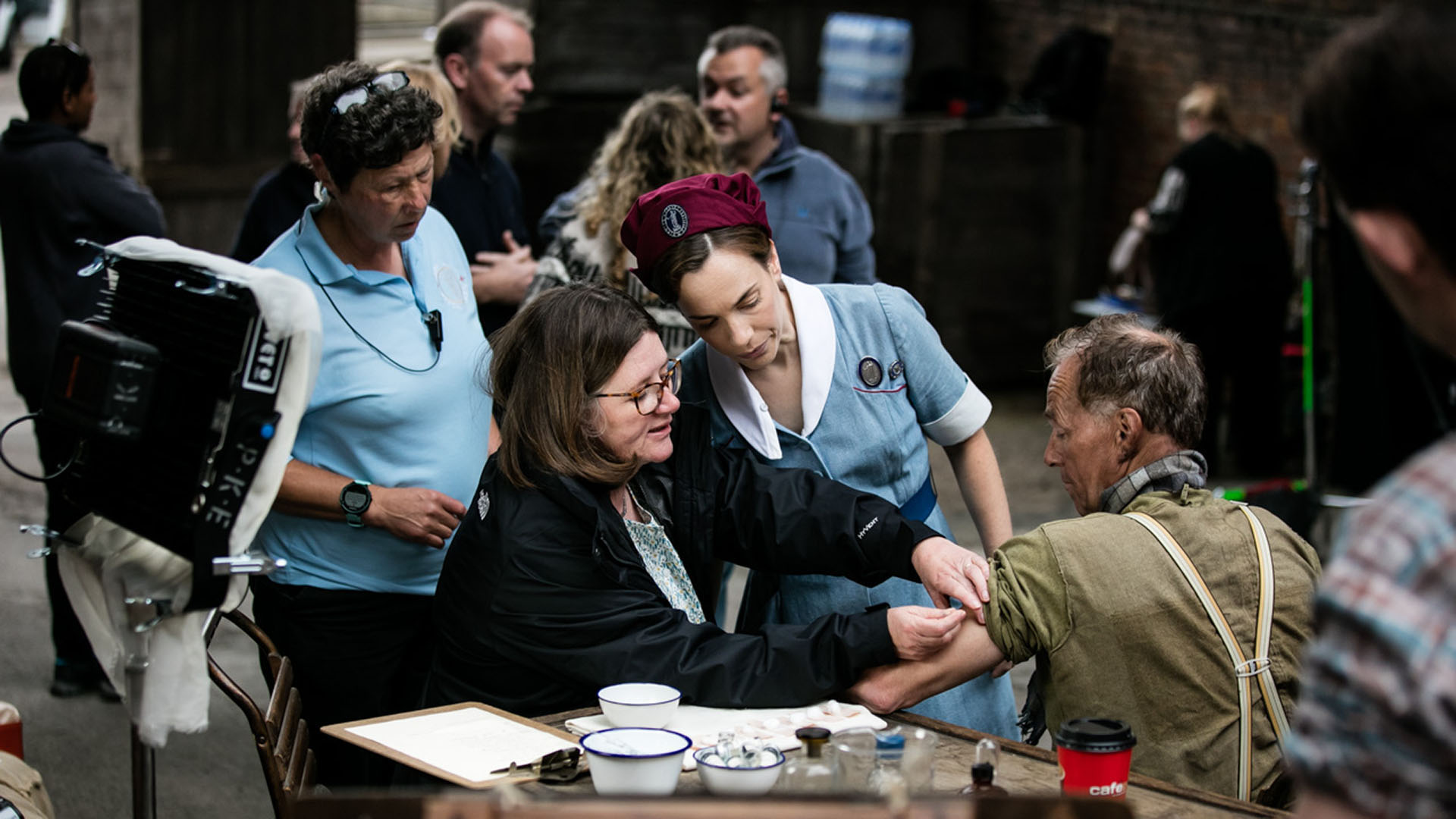 For 1962, the singularly unusual act of bringing the father into the room to support the mother though the second stage of labor is also demonstrating that practice changes.

Actresses who portray labor well make me forget where I am, and I have the urge to be beside them when in the throes of a contraction. Unlike real labor, when the director says "Cut!" they not only stop 'contracting' but may even remove their abdomen too.

Back on the real labor ward I do occasionally wish that I could say "cut" to give the woman a break, or if they haven't had the labor or birth that they might have chosen, do another take to get the perfect birth. Call the Midwife doesn't go in for perfect births, but often portrays birth in poor conditions using physical and emotional support with the basic methods of pain control that were available in the early 1960s. We show that birth is normal, it isn't a medical condition needing treatment, it's a normal physiological process and the midwives diagnose problems and refer for help when needed. Women at the time were quite used to relatives, friends and neighbors giving birth at home attended only by a midwife.

A birth on the the set is rehearsed using a doll, then filmed with a prosthetic baby. When a real baby needs to be seen I bring a baby to the set after explaining the process to the parents and answering all their questions. The parents and chaperone watch close by and the baby calmly and quietly replaces the prosthetic so filming can continue. I stay as close as possible which invariably means a very small space beside the bed, my arms hidden under the covers holding the baby in position. Babies are very well treated and frequently sleep through the whole scene. We don't wake them or make them cry, they are never more than a few feet from their mother and are returned as soon as possible. Their working hours are strictly regulated, and they are never on set for more than a few minutes at a time.

One side-effect of the show that has been a surprise to me is the effect on viewers. Two viewers that we have heard about have accidentally delivered babies and said that they learned what to do and weren't frightened because they had watched Call the Midwife. As a midwife, I'm delighted that women have been successfully supported at the point of giving birth. I'm also a little disconcerted that people are learning midwifery skills from the show! But if we are helping women to have confidence that birth is invariably normal and not a medical procedure, then I'm delighted.

Call the Midwife is now filming season 7, which will bring a new and exciting set of challenges.