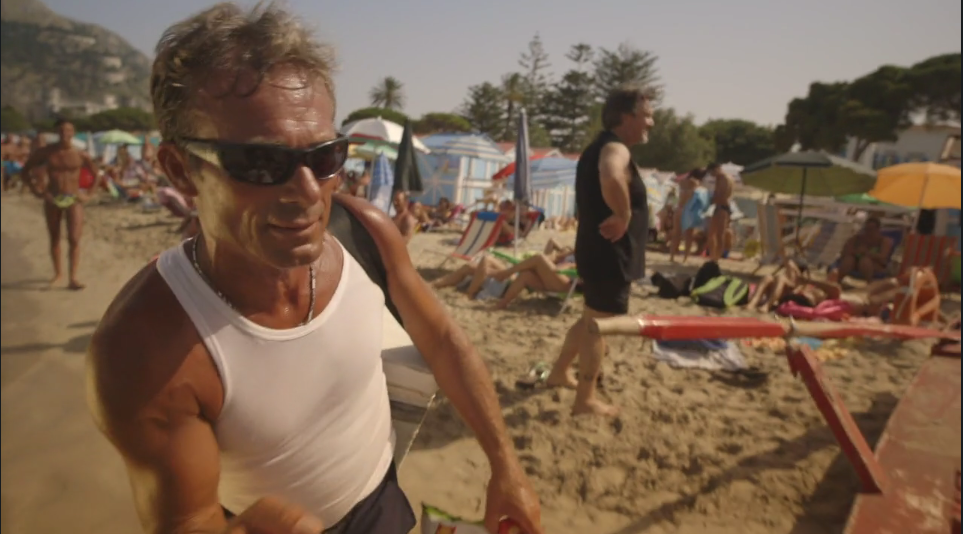 Mondello beach, for me and for everyone who lives in Palermo, is much more than a holiday resort. It is an institution, a refuge, a milestone.

Sicilian teenagers see Mondello as a mirage and a place to conquer, a place where happy, smiling, festive and wealthy men and women get together to breeze carefree through the summer. In the summer of 2000, a group of friends and I decided to occupy a Mondello beach hut that was still available to see what really went on there.

The world I found did not betray my expectations, but the dream quickly ended when, after an inspection by the beach staff, we were thrown out. I was left with a strong sensation of something unaccomplished and of bitterness. This motivation connects the hut to my past and became the mainspring for making Buon Inverno (Happy Winter).

Happy Winter was above all my graduation thesis at the National Film School, the Sicilian branch, which specializes in creative documentaries. Thanks to it, I returned to Mondello, where I began to understand a great deal about the beachgoers. That’s when my idea to develop my first full-length feature arose.

The summer of 2014 spent in Mondello was crucial to winning people’s trust and becoming a part of that micro-world of cabins and summer rituals. The following year I spent the summer searching for the main characters of my documentary.

The dynamics that will be the central thread of my narration emerged from life on the beach. My characters are mostly from middle-class families who have been passing on the huts from generation to generation ever since the sixties, the years of the Italian economic boom. But today, they are experiencing a radical change in spending due to the economic crisis that has assailed not only Sicily, but Italy as a whole and the entire Western world.

Their stories describe their longing to carry on appearing wealthy and beautiful during the holidays despite the economic crisis.

This summer ritual, the symbol of economic wellbeing, sees the possession of a cabin as a form of redemption for the middle class, which doesn’t want to change its habits and prefers living with the crisis amusing themselves rather than relinquishing the goals they once obtained. This behavior reflects the contradictions of Western countries, which find it hard to accept living standards inferior to those of the previous generation in a consumer society where being equals possession.

Mondello’s carefree holiday atmosphere represents a suspension from the toils of the winter and this condition is an opportunity for me to face the subject with an ironic, fizzy and at times comical approach, but never superficially, thanks to the various interpretative levels the characters present. They have quite literally lost their shirts and lay bare their socio-existential condition, which isn’t too different from that of someone from Spain, Greece, France or North America.

At the narrative level, in the first part I deal with the characters’ appearance: the efforts of the three main ones are directed at creating the self-image they want to give the world and culminate in the big August 15 party. Then, through careful observation and my experience of the micro world of the huts, I manage to live from the inside a deep confrontation between them, collecting secrets they confide to each other, delving into their authentic lives and difficulties.

In the final chapter, once spectators are fully plunged inside the bittersweet atmosphere of the huts, hope returns with a note of naïve but absolutely sincere positive thinking: the group organizes a massive collection to buy a huge quantity of scratch cards in the hope of solving their problems with the intervention of fortune.

The years spent in Mondello helped me to get to know the people there and become familiar with the environment, to be able to predict any technical problems caused by the atmospheric agents and the beach itself (noise, sand, wind).

My idea as director is to relate the beachgoers to the space of the cabin, a limited one but also full of narrative elements. For the characters, the hut becomes the villa they can’t afford, the status symbol capable of making them feel wealthier and more powerful.

Observation has been the crucial element of the years I spent approaching the stories and will remain the dominant style of the film, allowing me to approach the characters, capture their gestures and expressions, without being too invasive.

A register consisting of static shots, combining formal accuracy and continuously new narrative contents, will alternate with a moving camera, a freer camera capturing visual moments associated to the sea. Underwater shooting represents the sea as the territory of fantasy and dreams, the element the characters retreat to from time to time.