About the Evolution Lab

Adventures in the Tree of Life

“Evolution isn't just a story about where we came from. It's an epic at the center of life itself.”– Kenneth R. Miller, Biologist, Brown University

If you are reading this sentence, you’re presumably a member of the species Homo sapiens, one of somewhere between 5 and 100 million distinct types of organisms living on Earth today. Incredibly, the story of how you are related to all of those species––and millions upon millions more that have gone extinct over the 3.5-billion-year history of life on Earth––can be summarized in an enormous family tree. To help you explore this tree and understand the amazing mechanism behind it, we’ve created the NOVA Evolution Lab.

Play this Lab and you’ll be on your way to becoming an expert in phylogenetics––a fancy name for the study of the evolutionary relationships among species. The information and concepts you learn along the way will provide a strong foundation for pursuing any topic in the life sciences, from astrobiology to zoology. As Russian biologist Theodosius Dobzhansky noted in the title of his 1973 essay, “Nothing in biology makes sense except in light of evolution.” 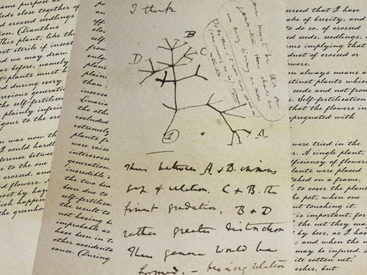 The concept of a "tree of life" springs directly from Charles Darwin's theory of evolution.

The Evolution Lab features two interactive digital learning tools––made available online for the first time here––developed by the Life on Earth project based at Harvard University’s School of Engineering and Applied Sciences. “Understanding phylogenetic trees can be difficult, but we’re working to make it more accessible,” says principal investigator Chia Shen, director of Scientists’ Discovery Room (SDR) Lab. Shen’s team worked for several years to develop Deep Tree, “an open-ended space to explore the common ancestry of all species and understand how life continues to evolve.” Florian Block, lead developer of NOVA's web version of Deep Tree, notes that today most computers and mobile devices have enough power to run interactive visualizations from huge datasets. “Working with NOVA to make our work accessible to virtually anyone with Internet access is exciting––we want as many people as possible to experience some of the evolutionary wonders contained in the tree of life."

The other tool that came out of their research is a puzzle-based game called Build A Tree, in which players create their own phylogenetic trees from a set of species and a list of shared traits. “Games can be powerful tools for giving people a motivating and structured learning experience,” says Michael Horn, an assistant professor of computer science and learning science at Northwestern University and co-principal investigator for Life on Earth. “But for us, it’s more about providing a really challenging problem in a context where it’s fine to fail over and over again as an integral part of the learning process, as you puzzle through quandaries that real scientists have wrestled with over the centuries.”

Begin your exploration by watching our introductory video entitled “Evolution 101” for an overview of evolution, going back to its discovery by Charles Darwin (and Alfred Russel Wallace, just a little late to the party). Then you’ll be ready to put your understanding to the test by playing our version of the game of life. 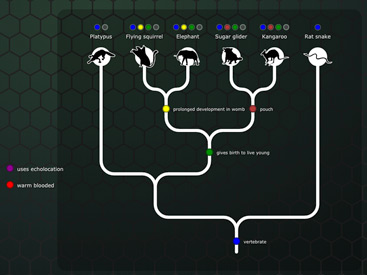 Start by building your own phylogenetic trees by analyzing the traits and DNA that characterize selected species. We’ve produced a series of puzzles, animated videos, and background information to lead you through levels that start out simple and build in complexity:

Once you’ve learned how to create trees that capture the evolutionary relationships among a handful of species, you’ll be ready to enter free-play mode to conduct your own investigations in our virtual tree of life. Deep Tree contains information about more than 70,000 species, with detailed descriptions of 200, spanning the 3.5-billion-year history of life on Earth. And it allows you to relate any two species to identify their shared traits and trace their evolutionary lineages back to when they last shared a common ancestor. 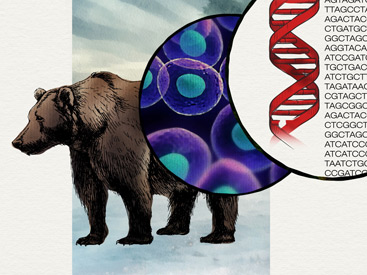 The variation at the heart of evolution is genetic variation—mutations that can be passed from one generation to the next.

By the end of this Lab, you’ll have a solid understand of evolution and how it has led to the astonishing diversity of life on Earth. And if you’re among the many people who are confused by common misconceptions about evolution––for example, if you think it’s something that only happened in the past, or that it moves with a purpose toward ever-greater perfection––you’ll learn the real deal.

I use genetics to study the evolution of birds and other organisms—how they fight diseases and respond to global change.

NCSE promotes the teaching of evolution and climate science in the public schools.