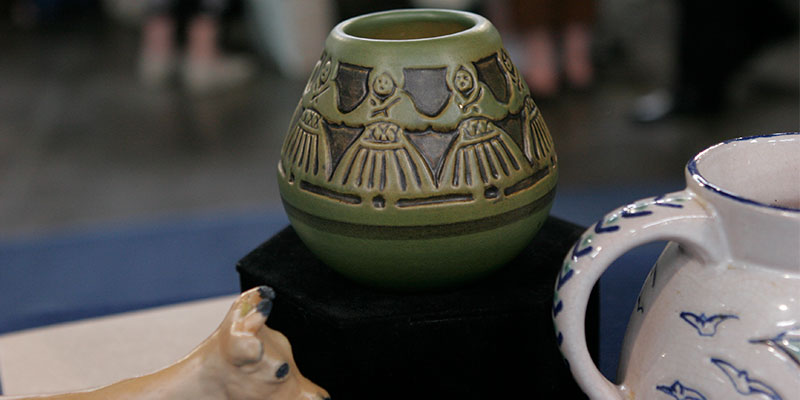 Learn the basics of collecting this enduring art pottery from the University of North Dakota.

In 1910, Margaret Kelly Cable was hired by the University of North Dakota's (UND) School of Mines to oversee the making of ceramic products, including drain tiles, sewer tiles, brick—and most importantly, pottery. The idea was to promote the state's high-quality clays. Cable would remain at the university until 1949, and she and the pottery that her students and colleagues made in the ceramics department until its demise in the 1960s became one of the state's most prized creative products.

The university's art pottery is now very collectible, and almost 100 years since the first pieces were made there, appraiser Suzanne Perrault discussed the pots when the ROADSHOW visited Bismarck in the summer of 2005.

The first thing Suzanne noted is that the pottery, sold mostly in the Midwest when it was being produced, comes in a wide range of prices and quality. "You can find pieces in the $100 range of smaller size by lesser students," she says. "A great piece that's large with first-rate decorations will go for over $20,000. But you can get something very nice for $1,000 or $2,000."

School of Mines pottery is often heavy and thick-walled—the pots, the glazes, and the decorations almost always have a hand-made feel. "It's not always the most delicate or elegant pottery ever made," Suzanne says.

The pottery that came out of the School of Mines is typically glazed with muted colors. "They used lots of blues, greens, pinks, and browns, mostly earth tones," Suzanne says. While the pottery had different styles—some had an Arts and Crafts feel and many pieces show an Art Nouveau or Art Deco influence—the decorations on the pots often featured North Dakota flora and fauna such as prairie roses, wheat, and buffalo. Western themes, such as cowboys, Indians, and horses, are also popular among collectors.

"The decorations were in keeping with the whole point of the pottery," says Suzanne, "which was to disseminate the clay and show that North Dakota had something to offer."

What to Look For

All prospective collectors of School of Mines pottery should look for the round cobalt-blue seal, the stamp of approval put on all the university's saleable pots and other ceramic products, such as paperweights and ashtrays.

Many of the most valuable pots were made by the pottery's three most famous potters: Margaret Kelly Cable, her sister Flora Cable Huckfield, who worked at the university from 1924 to 1949, and Julia Mattson, who worked there from 1924 to 1963. Larger pots are also very desirable. "Part of the reason for that," Suzanne says, "is that a large piece means it's done by more talented artists who will spend more time and make it more elaborate. [They're different] from the more run-of-the-mill pieces done for department stores or gift shops. The large exhibition pieces made in bentonite, painted with mineral colors, with Western-type decorations, can bring a fortune."

When fired, bentonite clay turns into a burnt sienna hue, and was used on pots usually decorated with Indian motifs. Also popular, Suzanne says, are Arts-and-Crafts-type decorations, such as silhouetted trees, flowers, leaves, or stylized animals.

"If you have a pot that's 12 inches tall with first-rate decorations, you have something great—and rare," Suzanne says. "If it's the size of a Japanese tea bowl with a prairie rose decoration, it's something pretty common."

For more on School of Mines Pottery, Suzanne recommends: