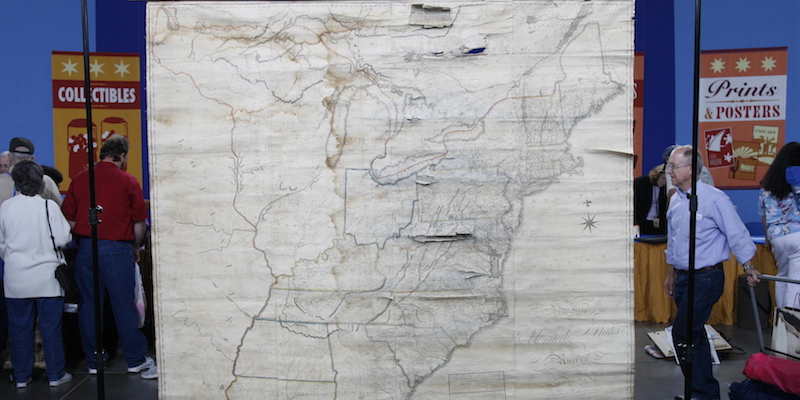 Appraiser Christopher Lane knew he'd found a rare map in Tucson, but thorough research revealed it to be rarer still.

At the Tucson ANTIQUES ROADSHOW in summer 2006, a man named Andy brought in an antique wall map of the United States from the early 1800s, made by America's first professional cartographer, Osgood Carleton, that had quite an effect on appraiser Christopher Lane, of the Philadelphia Print Shop. "It's the kind of map you just don't expect to see because there just aren't very many of them," Chris told Andy, noting he had only seen one such map previously and that just half a dozen or so examples of the map are known to exist. Chris told Andy it was worth $5,000 to $6,000 as is, and up to $10,000 if he had a restorer repair it.

"That's amazing," said Andy, who thought that two other maps he had brought to the ROADSHOW, newer and in far better condition, were worth more. "I'm floored," he said. "I almost didn't bring it." "Well, I'm really glad that you did," Chris replied. "It's a very rare and important map." After his visit to ANTIQUES ROADSHOW, Andy contacted Chris and asked him to sell the map for him. In September 2006 Andy shipped the map to Chris, who started researching its provenance. But once Chris had the chance to study the map more closely than he did in Tucson, he realized it might be far rarer and more valuable than he first thought.

"Previously, there were two known wall maps of the United States that Carleton did," Chris explained. "One in 1791 and one in 1806. That's what's recorded. That's all that's listed under Osgood Carleton. The title of Andy's map was essentially the same as the 1806 map and it looked similar. I had no reason to think it wasn't the same map."

During the first day of his research, Chris discovered that Andy's map was not in fact Carleton's 1806 edition. Unlike the 1806 edition, this one had no date printed on it. When he got out an image of the 1806 map, Chris saw other subtle differences, such as the delineation of Lake Champlain, which was drawn more accurately in Andy's map. Because of these modifications, Chris speculated that this might actually be a later update of the 1806 map that was still published bearing a date of 1806. The map was most likely published after 1806 but before 1810. Improvements in the topographical features of the frontier led Chris to further speculate that Carleton might have even used information that came back from the Lewis and Clark expedition. Chris soon realized he had found something special. "But to say a map is unrecorded," Chris knew, "you have to check everywhere."

So Chris scoured roughly 50 books he had on the shelves of his shop that catalogued early American maps—they only listed the 1791 and 1806 editions of the Carleton maps. Then he checked the holdings of libraries with early American map collections, such as the Library of Congress and Harvard University. As each institution showed no record of the map in hand, Chris's anticipation grew: He may just have found a map by an important American cartographer that no one was yet aware of. "It was very exciting," says Chris, who spent a few months hunting for another example of the same map, "you don't come across maps that haven't been recorded too often."

Finally, Chris had done enough homework to confidently write this description of the map, which was restored and put up for sale in January 2007: "A previously unrecorded, separately issued, wall map of the U.S. by Boston mathematician, Osgood Carleton (1742-1816)... This possibly unique map is an excellent example of early American cartography." Because of the map's one-of-a-kind status, Chris knew he had to reassess the map's value. He priced the restored map at $36,000, almost four times the value he had originally given the map, if restored, on air. The first collector that Chris told about the map bought it. While it sold for a good price, the pleasure in the process for Chris was calling place after place and nailing down the map's one-of-a-kind status. Chris, and Andy, were naturally also pleased that the extra research improved the value of the map.

"I would have been upset," says Chris, "if the value had gone the other way."