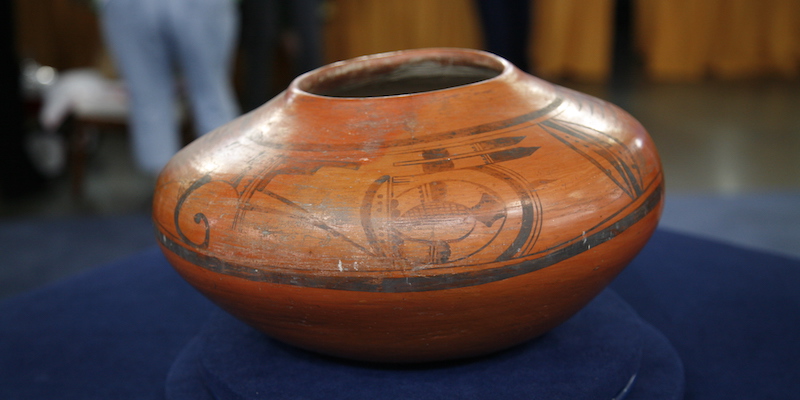 Was a beautiful $3 pot made by a famous Hopi potter?

At the July 28, 2007, ANTIQUES ROADSHOW event in Louisville, Kentucky, a guest arrived with an American Indian pot that he bought at a yard sale just a few years ago. "I was in northern Michigan," said Minaz, the owner, "and I paid $3 for it... I'm really attracted to Native American materials, pottery, rugs, jewelry... And I know that it was just beautiful, so I had to buy it."

"Did you have a sense that it had any importance?" appraiser Linda Dyer, a dealer in American Indian art and ethnographica, asked Minaz during the on-air segment.

"No," he told her. "I don't know anything about pots or pottery or American Indian artifacts. I just like the design and I like the squished form."

"Well, this is one of those objects that's rich with potential," Dyer said. "It is a Hopi pot... It's from the First Mesa. And it could be the work of the premier potter of the Hopi. Her name was Nampeyo."

That was an exciting supposition, because Nampeyo (pronounced nam-PAY-yu), was the "master potter" among the Hopi, Dyer says, and their "grand dame" of pottery. If the vessel were only a fine example of Hopi pottery made by an anonymous potter, it would sell for about $2,000 at auction, she says. If it is a Nampeyo pot, Dyer believes its auction value shoots to between $10,000 and $30,000.

Nampeyo, whose Hopi name means "snake that does not bite," and who was given the Anglo first name Iris, was born in about 1860. She learned the craft of pottery as a girl from her grandmother. When the photographer Willliam Henry Jackson visited the Hopi mesa in 1875, he happened to take photographs of the 15-year-old Nampeyo, who lived on the First Mesa in the village of Hano, in the Arizona Hopi Reservation.

Since the Hopi lived on the same land as their ancestors, Nampeyo saw first-hand the shards from Hopi pots that were made in the 14th, 15th, and 16th centuries, the glory years of Hopi pottery. Those pots were harder, smoother, and denser than the pots being made by the Hopi in the mid-19th century, which had deteriorated in quality and included crackled surfaces. The fine earlier vessels inspired Nampeyo and she was able to replicate the high-quality clays and paints used by earlier generations of Hopi.

Martha Struever, a Santa Fe dealer who has been buying and selling Nampeyo pots for over 30 years, describes Nampeyo's pottery skills this way: "She could make [pots] better, finish them better, shape them better, and paint them better... She also originated beautiful painted designs and fashioned symmetrical, well-formed vessels... She's the first celebrity potter, and with Maria Martinez, one of the two most famous Indian potters ever."

Nampeyo was a recognized potter by the time she was 20. Her pots became prized by Anglo traders, and the young Nampeyo almost certainly sold her work through Keams Canyon, the first Hopi trading post, established on the Hopi Reservation in 1875, the same year that Jackson photographed Nampeyo. The popularity of these pots and all things Indian was fueled by the completion of the Santa Fe Railroad through Arizona in 1881 and the Columbian Exposition in 1892 that featured Southwestern Indians.

By the late 19th century, Nampeyo had almost single-handedly launched a renaissance of modern Hopi pottery, known as the Sikyatki Revival or Hano Polychrome period. "Polychrome" in this sense refers to the many colors used by Nampeyo and her followers, including reds, browns, yellows, and blacks created through a mix of vegetal pigments and minerals. No slip was needed, because the clay that Nampeyo rediscovered fired with a very smooth surface.

"Nampeyo was so creative and had extraordinary artistic skills," Strueyer said.

There's an apocryphal story that Nampeyo learned about these earlier Hopi pots from an excavation in 1895 by anthropologist Jesse W. Fewkes of a former Hopi village called Sikyatki, a few miles north of the First Mesa. The story, repeated by Fewkes, was that Nampeyo's husband worked on the excavation site and showed the pots to his wife. But Nampeyo's style had emerged earlier, and it's very likely that she was aware of these earlier pots long before the Fewkes excavation, Strueyer says.

In 1905 and again in 1907, Nampeyo traveled to give demonstrations of her work at Hopi House, which was built by the Fred Harvey Company to sell Hopi wares at the edge of the Grand Canyon. She and her husband, Lesso, also visited the Chicago Exposition in 1910.

But Nampeyo suffered from glaucoma (and possibly trachoma); her vision deteriorated in the 1900s, and she went blind. Her family continued her work. "I learned from Nampeyo, and so did my mother, Annie," said Daisy Hooee, one of Nampeyo's granddaughters, who is quoted in Rick Dillingham's book, Fourteen Families. "Everybody painted for her—Nellie, Fannie [two other of Nampeyo's daughters], and my mother helped her a lot painting those little fine lines. Her husband, Lesso, he helped, he sure could paint, that old man." Nampeyo died in 1942, but her granddaughters and great-granddaughters have taken up the craft.

And so even though Linda Dyer wanted Minaz's pot to be a Nampeyo, she was reluctant to designate it as one until a Nampeyo expert saw it. "It's like somebody says they have a piece of Geronimo's clothing," she says. "How do you prove it? Unless you have foolproof evidence or provenance, it's hard." The owner didn't have any documentation that traced the provenance back to Nampeyo, who rarely signed her work. The owner also lacked a photo of Nampeyo with this particular pot (although such photos were sometimes staged by those who knew that a pot dramatically increased in value if it was associated with Nampeyo.) A definitive authentication is made even more complicated because in later years Nampeyo would craft the pots by feel and have her family paint the designs.

According to Dyer, to authenticate a pot, "you use everything from the materials involved, the style, the decorative elements. In this case," she says, "the treatment of the clay was correct—the Hopi clay had a woody sound to it—and the right treatment of the mouth, a flare, that is keeping with her work." Dyer also noted that the stylistic bear paw on the vessel, called a seed jar, was a favored design element of Nampeyo's. But to make sure her hunch was right, she sent pictures of the jar to Martha Strueyer, the Nampeyo dealer in Santa Fe.

"It's a very good jar," Strueyer said after seeing the pot. "It certainly is a Nampeyo. I don't think it's a 'killer,' but it's a nice jar. My guess is that it was made between 1900 and 1905, and I'm basing that on a few things... What looks like its thin wall, its shape, the way the shoulder comes up—all are typical of that period." Afterward, Dyer gave Minaz this authentication: "The work may be ascribed to the artist [Nampeyo] on the basis of style, but leaves some question of the actual authorship."

Minaz says he's going to sell the pot that's since been given an insurance value of $16,500, and which could sell for more than $20,000 at auction.

"I don't collect Native American artifacts, even though I like them," Minaz said. "It needs to be displayed by somebody who is really wealthy and has the ways and means to enjoy it. Things are tight. I can use the money." Besides, he says, "I collect cast-iron toys, not pottery, because I'm always afraid I'm going to break it."

For more on this subject, see: Nampeyo and Her Pottery, by Barbara Kramer. University of Arizona Press, Tucson, 2003. The Legacy of a Master Potter, Nampeyo and Her Descendants, by Mary Ellen and Laurence Blair. Treasure Chest Publications, 1999.