In Cincinnati Hour 3, during a visit to the Cincinnati Zoo, ANTIQUES ROADSHOW discusses with a representative of the U.S. Fish & Wildlife Service how today’s endangered rhinos are affected by the antiques trade.
Support provided by: Learn more

Editor's Note 8.24.15 — This article was originally published in 2012 and discusses the endangered species of rhinoceros, particularly in relation to rhinoceros-horn antiques. In August 2015, the Sumatran rhinoceros was deemed extinct in the wild in Malaysia.

Most antiques raise no ethical issues beyond routine fair-business practices: The seller must be honest in advertising and describing the merchandise, and the buyer must negotiate in good faith and pay promptly. But some classes of antiques are so ethically fraught that a conscientious collector may eschew participating in the market altogether. ANTIQUES ROADSHOW sees many antiques of this kind: racially backward figures from the Jim Crow era, toys featuring Nazi imagery, and works of art that consist of material, such as ivory, harvested from the carcasses of endangered animals. In July of 2011, Lark Mason appraised a set of five Chinese cups carved from rhinoceros horn, circa 1700, valued at $1 to $1.5 million, setting a ROADSHOW record. The 300-year-old objects were undoubtedly the work of master artisans, and were made in a time when rhinoceros were more plentiful than they are today: Currently, there are only five surviving species of rhinoceros, and every one of them is threatened, some critically so, because of desire for their horns. The result is that many people find the trade in rhinoceros-horn antiques grossly unethical, even when it is legal.

Understandably, people find the trade in rhinoceros-horn antiques grossly unethical, even when it is legal

What drives the market, says Lewis, is the belief, common in the Far East, that taking powdered rhinoceros-horn as a medicine can cure some ailments. (Clinical tests do not support the belief.) Buying a horn cup for hundreds of thousands of dollars and then grinding it to dust simply does not make economic sense. To meet demand for ground rhinoceros-horn powder, criminals turn to a much cheaper alternative — poaching.

Historically, most poaching was undertaken to satisfy a high demand for medicinal rhinoceros-horn in China. According to Ted Kaptchuk, an associate professor of medicine at Harvard who is also a licensed practitioner of traditional Chinese medicine, the Chinese materia medica rhinoceros horn be used to treat high fevers accompanied by bleeding. "So what they usually do these days is substitute antelope horn or water buffalo horn," he says. 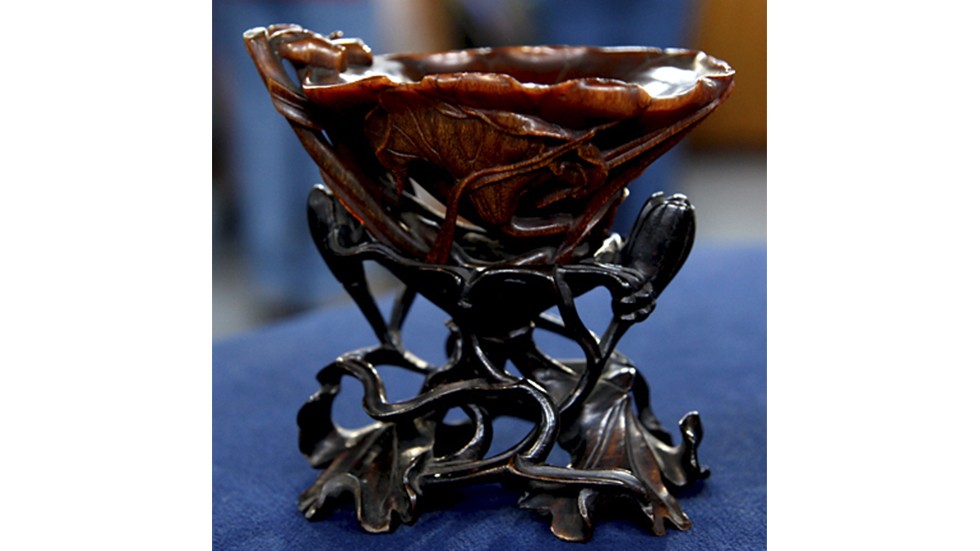 As demand has gone down in China, it has risen dramatically in Vietnam. What seems to be driving this spike in demand is a story, circulated by Vietnamese media and by word of mouth, that an official in the Vietnamese government was cured of cancer by taking rhinoceros horn. The claim is not credible;the story was likely fabricated by criminal gangs seeking to drive up the price for their contraband goods. In any event, it is criminals who have benefited from the resulting craze. In Vietnam, rhinoceros horn is now more valuable than gold, and poachers are cashing in.

"After many years of making headway in rhinoceros poaching," says Lark Mason, "all of a sudden last year was terrible. The western black rhinoceros became extinct in Africa. The last Javan rhinoceros in Vietnam was killed. And 448 rhinoceros were poached in South Africa, which is a record number."

As recently as 2007, when the cancer story was just beginning to circulate in Vietnam, only 13 rhinoceros were poached in South Africa, which is home to the world's largest population of rhinoceros. The number has doubled every year since, and 2012 seems likely to set another record. In response, a number of governments have adopted stricter laws on trade in rhinoceros-horn artifacts, or have begun enforcing laws that were already on the books.

It's too early to know how much of an effect the new regulations will have on protecting rhinoceros populations. Even the best-intentioned governments face myriad difficulties in curbing poaching.

Dr. Terry Roth, VP of Conservations & Science, at the Cincinnati Zoo, talks more about the rhino as an endangered species and the poaching of rhinos today.

"Each country has its own political issues to deal with," says Mike Moore, senior permit biologist for the U.S. Department of Fish and Wildlife. "And there are regulatory issues. But you've also got beliefs and cultural elements that have been in place for centuries, and misinformation about the medicinal properties of rhino horn. Educating the global public is a major challenge."

The antiques market, on the other hand, responded immediately. Before the new, stricter regime came into place, Mason says a single cup from a Pittsburgh collector sold for $537,000 — "Well above the appraisal value," he says. "Then, in mid-December, China announced that they would begin to enforce their existing laws, which prohibit trade in any ivory or horn, whether it's worked or raw. They started arresting people. In February, U.S. Fish and Wildlife agents made a major, high-profile bust of a rhinoceros-horn smuggling operation. Then in March, the European Commission temporarily suspended all internal trade in rhinoceros horn, regardless of age."

A week after the European Commission's announcement, the million-dollar cups Mason had appraised in 2011 came up for sale at Sotheby's. Three of the record-setting collection of five cups did not sell, and the two that did sold at the low end of their value estimates.

A year after an appraisal of controversial rhino cups on ROADSHOW, Lark shares more about the trade and its ethics.

Had Doug Huber's five-cup collection been put up for auction before the new trading restrictions were put in place, Mason says he's certain it would have commanded a higher price. "But because of that string of events — the extinction in Africa, the killing of the last Javan rhino in Vietnam, the change of policy in Europe and China, the bust in the United States — all happening one after the other, the market is definitely pulling back."

Though some find all animal-derived antiques distasteful or immoral, an interest in objects of beauty carved long ago from ivory and horn , and often does, co-exist with a desire to protect and preserve the natural world. "As an educational tool," says Matt Lewis with the World Wildlife Fund, "we have a carved ivory pagoda, and it's one of the most beautiful things you've ever seen, the work of a true master. But, holding it in your hand, you have to think about the animal that died for it."

Humans use animals for all sorts of purposes: food, clothing, shelter and art objects. In the past, we have driven animals to extinction with no idea of what we were doing. Now, our technologies of slaughter are even more potent, and the risks we pose to ourselves, the rest of the animal kingdom, and indeed the planet, are that much greater. At the same time, we have developed technologies that help us to understand the consequences we court by unchecked exploitation of the natural world, as well as legal instruments to protect us from ourselves. Yet, as the continuing slaughter of rhinoceros shows, they are often not enough.

ROADSHOW continues the discussion of the ethics behind the collection of rhino horn objects with Dan M. Ashe, Director of U.S. Fish & Wildlife.

ANTIQUES ROADSHOW spent a long time talking with Matt Lewis of the World Wildlife Fund about the perils facing the rhinoceros.

For readers interested in educating themselves on the state of rhinoceros and other at-risk animal populations around the world, Lewis recommends a number of web-based resources.