This porcelain teapot, brought to the Corpus Christi ROADSHOW last August, is indeed the kind of Chinese pottery that would inspire the artisans of Delft, Holland, to create the white-and-blue vases, cups and bowls that we know as Delftware.

When Chinese craftsmen produced this ca. 1700 tulip-themed pot, which Nicholas Dawes, vice president of special collections for New York City's Heritage Auctions, appraised at around $1,000, the potters of Delft had been making ceramics, painted with any number of pigments, for years. But as trade with the Far East quickened and the ships of the Dutch East India Company returned to the Netherlands with their holds full of spices, textiles, and bone-white “China” enameled with blue designs, they started to mimic the Chinese aesthetic. When a political crisis suddenly interrupted the flow of porcelain from the Far East, Delft was ready to fill demand. By 1700, the soft, powdery blue color that they'd copied from Chinese porcelain was known as Delft blue.

Globalization ― something we think of as a modern dilemma ― followed more or less immediately upon learning that the world was, well, a globe.

We moderns take the international flow of ideas and designs for granted (though these days the anxiety of influence is often litigated in patent-infringement lawsuits). In 17th-century Europe, globalization was brand new. The mighty Dutch East India Company that brought porcelain, spices and exotica to Europe was the first business entity to link the East and West; indeed, it was the first multinational corporation. It would power the Dutch economy for 200 years, and make the Netherlands a global power ― but of a particularly Dutch variety.

After Columbus' expeditions to the New World, the European powers began their scramble for empire; the conflicts between colonial Spain, England, France and Portugal and the cultures they subjugated or destroyed are still playing out half a millennium later. The Dutch were not exempt from the expansionist mania, but instead of fighting for dominion over new lands, they generally pursued commerce with their peoples. The imperial conquests of Spain, for example, were largely fueled by evangelical fervor ― officially, anyway ― but the Dutch were so strongly identified as a race of merchants that West African trading partners would tell them, with what we may imagine was a mixture of relief and approbation, “Gold is your god.” Though it must be said that, in service to mammon and their shareholders, the Dutch would, at their worst, be as brutal as the conventional conquering powers.

In 1595, lured by spices so rare and valuable that a single pouch could purchase a herd of livestock, the first Dutch ships sailed south to Africa, then east around the Cape of Good Hope and across thousands of miles of Indian Ocean, arriving at the Indonesian island of Java. By the time they returned home with little in the way of cargo, two-thirds of that first expedition's crew was dead. But the trail was blazed, and trading concerns quickly sprang up. In 1601 alone, Dutch companies sent 65 ships to the Far East in search of cloves, nutmeg, cinnamon, ginger and turmeric. The profits they realized were astounding. In the centuries prior, trade routes to Europe meandered from the Far East into the Hindu lands of India and Muslim Western Asia, across the Indian Ocean to Egypt, then north to the Mediterranean and eventually into the rest of Europe. Every merchant along the way added his percentage. “By the time the spices reached Europe,” Stephen Bown writes in Merchant Kings, “what could be had for a basket of rice [in Indonesia] ... might be worth a fortune in silver.” 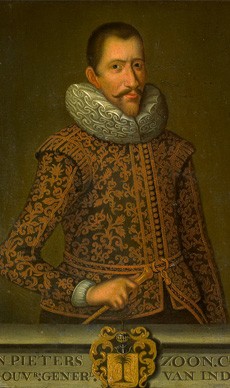 In 1614, Jan Pieterszoon Coen, at 28 already an arrogant and shrewd businessman, became director-general of the "VOC," working tirelessly to tighten Dutch trade monopolies in the Far East. (Image source: Wikipedia.com)

By cutting out these middlemen and importing spices directly, business for the Dutch companies was good. It took them little time to realize that, if they cooperated with each other rather than competed, it would be even better. So in 1602, the Dutch government allowed the creation of the Vereenigde Oost-Indische Compagnie, “United East India Company.” (The company was so monolithic that there was no need to specify that it was Dutch ― everyone knew.) The most important request of the merging companies, which the government granted, was that the VOC be given a monopoly in the Far East. Of course, it's far easier to be promised a monopoly in Northern Europe than to enforce it on the other side of the globe, so VOC ships were heavily armed and empowered as governmental proxies to declare war, hire troops, establish colonies and mete out justice in whatever guise was most expeditious to maximizing profits.

The VOC's prophet of ruthlessness was Jan Pieterszoon Coen, a harsh, arrogant accountant who became director-general in 1614, at 28 years old. The spice trade, Coen believed, was vital to the Dutch national interest, so he permitted himself any action that would secure the VOC's monopoly and tighten its control over the Indonesian islands where, alone in the world, clove and nutmeg grew. In what was in all meaningful respects a military campaign against sovereign nations, Coen captured, tortured and killed Indonesians who hesitated to break off long-standing trade relationships with nearby Chinese and Indian merchants ― who would bring rice and medicine ― in favor of trading exclusively with the Dutch, who offered heavy wool and velvet that were useless in the tropics. The VOC, under Coen, kept mercenaries on staff and burned or otherwise destroyed spice fields not under their control in order to induce artificial shortages. Coen furiously hounded Portuguese and English traders, torturing or killing them and capturing their forts. In 1605, they ousted the Portuguese from the Spice Islands.

Coen's violent methods were not restricted to company business; they were also put in service of maintaining the virtuousness of the youth. When Coen discovered a 12-year-old girl who was in his care in the embrace of an older boy, he had the boy decapitated and was dissuaded from drowning the girl in a bathtub, contenting himself with having her publicly whipped.

It was no doubt a violent era, but the director of the VOC was, even in his time, notorious. The admirable tolerance of the Dutch within their borders did not extend to the peoples of unfamiliar nations. Under the single-minded direction of men like Coen, writes Bown, the VOC was, “by the late 17th century the most powerful and richest company in the world ... [involved in] construction, sugar refining, cloth manufacturing, tobacco curing, weaving, glass making, distilling, brewing...” It has been estimated that three-quarters of the cargo-carrying ships in the middle part of the 17th century were VOC. Fed on its profits, the Netherlands entered a golden age, allowing geniuses such as Rembrandt, Vermeer, Descartes and Antonie van Leeuwenhoek, the father of microbiology, to flourish.

The $1,000 teapot from Corpus Christi would not have been in this shipment, but in a later one delivered around 1700, at the peak of the VOC's power. Owing to corruption, mismanagement, and managerial stagnation, by 1800 the VOC would be bankrupt. But for two centuries, it returned large dividends to its shareholders. Some of the VOC's extreme methods are largely a relic of a more violent era, but the transnational structure it pioneered is still loose in the world. Globalization, which we think of as the modern dilemma, followed more or less immediately upon learning that the world was, in fact, a globe.