World War II Memorabilia and the Legacy of Enola Gay

Is it possible to collect artifacts associated with acts of violence without dishonoring the victims?

Since Stephanie brought her father's collection of World War II memorabilia to the Rapid City ROADSHOW last July, we took a closer look at the legacy of Enola Gay, the B-29 bomber he served on. In 1945, the 12-man crew dropped the world's first atomic bomb on Hiroshima, Japan. For some, the Enola Gay is a symbol of the Allied victory in the Pacific and the end of World War II, which it helped to hasten; for others it is only an unwelcome reminder of a few moments of unprecedented devastation.

Stephanie's collection raises a question: Is it possible to collect artifacts associated with acts of violence without dishonoring the victims?

Our era and all that follows have been transformed by the atomic bomb. Though they did not know it at the time the airmen aboard the Enola Gay were agents of that transformation.

A photo of Enola Gay from Stephanie's father Joe Stiborik's collection of memorabilia. Enola Gay carried the first atomic bomb ever to be deployed in wartime. The bomb was codenamed "Little Boy." 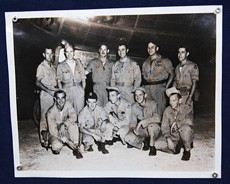 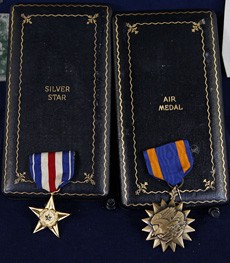 The Silver Star and the Air Medal, two of the medals Sergeant Stiborik received for his service.

Time plays a role in thinking such things through. Imagine you are at a yard sale in Maryland and find, in the bottom of a shoebox, a spent shell casing from the Battle of Antietam, the bloodiest in the American Civil War. The day was a tragedy for the 20,000 Union and Confederate troops who were killed, perhaps more so for their families. But surely no one alive can claim a personal share in that loss. The tragedy fades as the artifact transcends its origin in violence, its significance expanding into the wider currents of history — the emergence of the modern United States and the world-changing century to come. Stephanie's collection of photos, medals, and documents is a record of a wartime tragedy not yet as remote as the Civil War, rather too recent for comfort.

Her father, Sgt. Joe Stiborik, was the radar operator for the Enola Gay, the B-29 bomber that dropped an atomic bomb on Hiroshima on August 6, 1945. For the 100,000-plus innocents killed by the first atomic bomb, most of them vaporized instantaneously, the loss of life was a horrifying injustice. Claims of historical significance, made after the fact, don't really have any bearing on the grievance of the victims' families, nor even on questions of wartime law.

But it is also true that the Enola Gay's significance reaches beyond the humanitarian — even the military — context. Anyone who has ever gotten a CAT scan has benefited from nuclear science; anyone who has flipped a light switch has used electricity from a nuclear reactor. Strangely, the existence of atomic power probably prevented another war from enveloping the globe, as the U.S. and USSR's mutual belligerence was held in check through by the fear of apocalypse.

Our era and all that will follow have been transformed by the atomic bomb. The Army airmen aboard the Enola Gay, though they did not know it at the time, were the agents of that transformation.

"My father," says Stephanie, Sergeant Stiborik's elder daughter, "was a sensitive man, very kind and compassionate. He had no idea what was on the plane. The only people who knew were the pilot, the co-pilot and the Navy lieutenant who armed the bomb in flight. Tibbets, the pilot, came back through the fuselage mid-flight and told everybody they were going to 'split the atom.' That meant nothing to any of them. No one would have understood what the words 'atomic bomb' even meant."

Only a handful of scientists, military personnel, and government officials knew the purpose of the U.S. government's top-secret Manhattan Project, which culminated in the development of the world's first atomic weapon. Over six years, 100,000 people, in shops and factories across the United States, worked in total ignorance of what they were building. Stiborik would have known no more than they. In the days leading up to the mission, though, he got an inkling that the mission he was about to undertake was serious, and that he probably wouldn't return alive. He was stationed in Pensacola, Florida, assigned to another aircraft, when Col. Paul Tibbets came by his quarters with a bottle of scotch.

By the end of the walk, Tibbets had convinced Stiborik to join the crew of the Enola Gay, though he didn't divulge what would make the upcoming bombing run so important.

The morning of the mission, the scene that greeted Stiborik on the tarmac dispelled any lingering doubt that he'd signed up for the most important mission of his life as a soldier. Film and camera crews, on a general's orders, were thronging the Enola Gay with cameras and flashbulbs, telling Tibbets and his men to smile, to look this way and that, to appear busy. ...

"It was crazy," Tibbets once said — something like a film premiere. "I expected to see MGM's lion."

Stiborik knew the mission had to be related to Japan. At the time, the Allied slog through the Pacific showed no sign of growing easier. Every spit of land between Hawaii and Japan was the scene of a bloodbath. With Russia approaching from the west, the Allies were going to win; Japan's defeat was inevitable. But the end was only going to come at the cost of millions more dead. Civilians were not going to be spared. Tens of thousands of Japanese citizens, following Emperor Hirohito's decree, were already committing suicide — this well before an invasion of the mainland had even been contemplated.

"When you look at how the Japanese soldiers fought," says militaria expert Rafael Eledge, who appraised Stephanie's collection at $15,000 for insurance purposes, "90 percent of the soldiers defending the Pacific islands died." The Battle of Okinawa alone claimed somewhere around 250,000 lives — a higher death toll than was incurred in the Hiroshima and Nagasaki bombings combined. "There was no reason to think the Japanese wouldn't have fought at least as ferociously against an invasion of the mainland."

This, then, was the argument for using atomic power against Japan: A ground invasion would consume many millions of lives on both sides, and Japan would lose anyway. According to this line of thinking, the atomic bomb was not that different from the conventional warfare already being practiced. Targeting civilians, right or wrong, was already a tactic in the war and had been for some time, on both sides of the conflict. The firebombing of Japanese cities had killed hundreds of thousands of civilians, with the firebombing of Tokyo alone killing more Japanese than would be killed in both atomic blasts.

Yet that argument is hardly considered universally persuasive. The Japanese land war used to justify dropping the atomic bomb never occurred, except in the dossiers of war-planners. An actual invasion would certainly have gone differently, in ways we cannot know. In any event, after-the-fact arguments often feel like rationalizations — in this case, for destroying a city full of innocent people. Then doing it again in Nagasaki. The late Robert MacNamara, former secretary of defence and hardly a dove, cleared away the moral haze with shocking directness: "[General Curtis LeMay] said if we'd lost the war, we'd all have been prosecuted as war criminals. And I think he's right. He — and I'd say, I — were behaving as war criminals. ... What makes it immoral if you lose and not immoral if you win?"

If MacNamara's question sounds rhetorical, it isn't because the question has no answer; it's because the answer depends on who is being asked. "Perception depends on where you're standing," says Eledge, "even in antiques. I'm sure my opinion of Stephanie's collection would be different if I'd been in Japan when the bomb was dropped. But if I'd been one of the guys who'd just gotten through fighting every inch of the Pacific, I probably would have been thankful for the bomb."

One viewer might feel that artifacts associated with the Enola Gay have no place in any collection; that Hiroshima was, in MacNamara's phrase, a war crime. If it was a war crime, it surely is among the most terrible in history. Another will feel just as strongly that, quite apart from the military calculation that led to the use of atomic power, the bravery of men like Stephanie's father deserves to be honored. He and the rest of the Enola Gay's crew, fighting in a war that consumed the globe, accepted a mission that they assumed meant their deaths.

The uncomfortable middle position, one might argue, is that both viewers' convictions are unanswerable. Yes, the atomic bomb was incomprehensible in its power to destroy, and horrific in its effects on the human body, but that can't be the whole story. The world was coming apart when the atomic bomb entered history. Shortly after its appearance, the war ended. Horror and death are only two of its legacies.