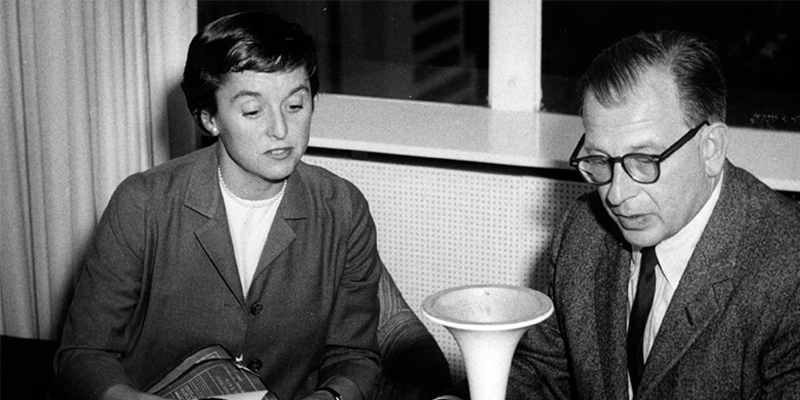 Learn more about modern design pioneer Florence Knoll, and how her early friendships at Cranbrook Academy became the foundation for her aesthetic vision, and the network she would draw upon throughout her career. Knoll died on Friday, January 25, at the age of 101.

At the April 2018 ANTIQUES ROADSHOW event at Ca’ d’Zan in Sarasota, Florida, a guest named Krista brought in a sculpture had she acquired when she worked on the showroom floor of Knoll Associates in the late 1960s. Krista told appraiser Eric Silver that she remembers she was always fond of his bronze "Golden Tree" sculpture. She let the artist, Harry Bertoia, know that if he ever made another, she would like to purchase it, and a few months later, he wrote Krista to say her sculpture was in the mail and it would cost her $250.

Silver estimated the current auction value of Krista's sculpture at between $30,000 and $50,000 at auction.

Harry Bertoia was just one of many artists Krista got to meet while working the showroom: she also crossed paths with Florence Knoll. Florence would go on to become one of the most influential figures in 20th-century design.

"I am not a decorator. The only place I decorate is my own house."

Florence Schust, known as "Shu" among her friends and family, was born May 4, 1917, in Saginaw, Michigan. Tragically, both of her parents died leaving her an orphan by the age of 12. Her upbringing was left to a foster guardian who took Florence on a tour of potential boarding schools; she selected Kingswood School for Girls in Bloomfield Hills, Michigan. Founded in 1931, the boarding school was designed by world-renowned Finnish architect Eliel Saarinen and [was] neighbored the legendary Cranbrook Academy of Art.

Florence's talent and special interest in the campus architecture caught Saarinen's attention and she became his young protégé. Saarinen and his wife Loja took Florence under their wing where she became a part of the family and developed a sibling-like relationship with the Saarinen’s son, Eero. Florence spent all of her free time with the family, including summer vacations in Finland.

After Kingswood, Florence went on to study at Cranbrook where she began her years of design training and met notable designers and architects she'd one day work with again, including Harry Bertoia. After a year at Cranbrook, she went to New York to continue her studies at Columbia University and then on to the Architectural Association, London, while continuing to summer with the Saarinens in Europe. At the outbreak of World War II, Florence returned to the United States and spent time with modernists Walter Gropius and Marcel Breuer in Cambridge, Massachusetts, which lead her to Ludwig Mies van der Rohe and the Illinois Institute of Technology to complete her architecture degree in 1941.

Florence moved to New York to work as an architect at several architectural offices. Being the only female, she was assigned to interiors. She famously said, “I am not a decorator. The only place I 'decorate' is my own house.” Fortuitously, while working on an interior design project she met Hans Knoll, the son of one of the pioneering makers of modern furniture in pre-war Germany. Hans, like Florence, was dedicated to bringing that modernist vision to America. Ultimately, after Florence freelanced on a few Knoll projects Hans brought her to work full-time for the company. Just three years later, in 1946, Florence and Hans founded Knoll Associates, Inc. Hans and Florence were married two months later, with Florence becoming a full partner soon thereafter. Hans was the salesman, while Florence took on the role of style guru.

"Shu U." — The Knoll Planning Unit

Florence carefully revolutionized the world of post-war office interiors. Typically, architecture and interiors operated as separate departments. But Florence insisted that harmony of the two was all-important to achieve a truly modern building. At Knoll, Florence headed up the Planning Unit, the design department responsible for the company’s showrooms and new projects bringing all of the pieces of design together, including textile, furniture, and architecture. Florence said, “I designed the architectural spaces that were needed to make the room work, things like the walls, or the sofas.” A member of the Planning Unit called it “Shu U.,” as many of their “young designers were siphoned off by architectural firms who began to start their own interior design divisions,” said Florence.

According to an early Knoll employee who worked directly for Shu, “Everything was controlled by Mrs. Knoll, everything that the public saw — letterhead, business cards, stationery, graphics — it doesn’t matter. She saw it, she approved it.” Florence was a one-woman show, she orchestrated every small detail into order, she was known for her critical eye. “She’d say, ‘Well, I think we should change that radius a little bit. It just doesn’t fit in with this aspect. There’s just something not right about it,’” before adding, "‘instead of being a quarter of an inch, it ought to be a three-eighth-inch radius,'” said former Knoll employee Bob Longwell. “She had that ability, to critique [something], to tear it apart and put it back together.” Her incredible revision process is what allowed the harmony of interior spaces and architecture. Florence brought a new level of standards and ethics to the profession.

Sadly, in 1955, Hans Knoll was killed in a car accident in Cuba. But Florence persevered, assuming control of the business herself. In 1958, she married Harry Hood Bassett, a Florida banker, and a year later sold her stake in Knoll to Art Metal Construction Company. She continued to work as Knoll's design director through the early 60s and retired in 1965, but the company whose aesthetic she was so instrumental in shaping has continued to reflect her vision to this day.

For an expert's take on Florence Knoll’s design legacy, we reached out to Jad Attal, a specialist in 20th-century design with Rago Arts in Lambertville, New Jersey, who offered this reflection:

I came to understand that [Knoll’s furniture] can be the foundation of a more personalized interior. ... A rosewood credenza might support a flat screen TV — or a collection of tribal masks, if that’s your thing. A boxy corporate gray sofa could be re-covered in a bright, patterned Knoll fabric to become the focal point of a modern living room. …

Knoll’s work continues to provide a modern design vocabulary most of us use to express ourselves. She created a reference point that makes us alike but also helps us express our individuality, and I think that’s something both genuine and pretty damn special.