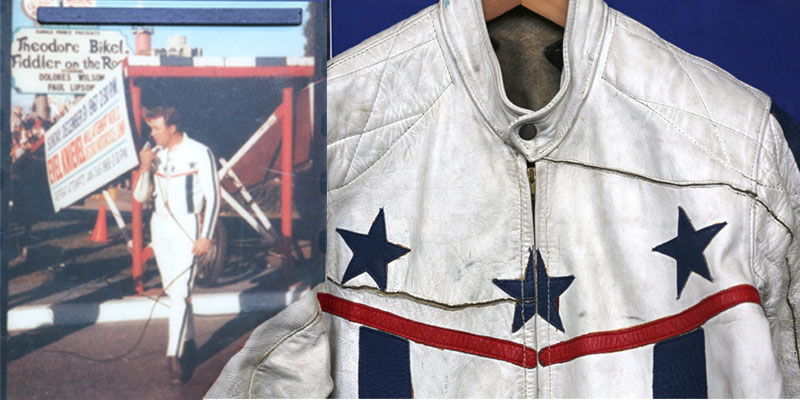 In 1967, Evel Knievel performed his longest stunt at Caesars Palace in Los Vegas, Nevada. In 2017, a guest named Diane brought in to ROADSHOW a leather suit made for Knievel that she believed was used in the 1967 Caesars Palace jump.

In 2017, a guest named Diane attended the ANTIQUES ROADSHOW event in Portland, Oregon, with a leather suit worn by the renowned Evel Knievel. Diane explained to collectibles appraiser, Tim Gordon, about how her mother, a seamstress, had created the leather jacket and pants for Knievel back in the late 1960s. According to Diane, Knievel returned the suit to her mother for repairs following his dangerous 1967 Caesars Palace jump in Las Vegas, yet he never came back to retrieve it.

Along with the leather suit was a photograph of Knievel at one of his adrenaline-driven stunts. Gordon pinpointed how Knievel, featured at Caesars Palace, is pictured in a perfectly intact outfit. Despite Diane’s story and the damaged condition of her suit, Gordon still speculated over whether or not it was the same one worn at this event, where Knievel attempted a 141-foot jump and endured severe injuries.

“I can’t confirm that this was in the famous Caesars jump where you see him tumble end over end,” Gordon said. “I mean, that video is so hard to watch just because of the outcome.”

Gordon described how Montana-born Knievel rose to fame as a thrill-seeking performer of death-defying motorcycle jumps. In the appraisal, Gordon talks about knowing Knievel’s story personally, as he too is from Montana.

“He told me that when he was a kid, he knew he was going to do something great,” Gordon said. “He got into the motorcycle daredevil business and he kept jumping more and more and more cars and buses and compacted cars.”

Gordon identified the multiple scuffs, punctures, skid marks, and tears left behind on the suit. The worn-down condition is indicative of Knievel’s legacy as a reckless entertainer.

Gordon estimated the value of the Knievel leathers to be between $40,000 and $60,000 dollars: However, if the leather suit were to be confirmed the one he wore during the Caesars Palace jump, the estimated auction value would rise to $100,000.

Watch the Caesars Palace Jump here and see the leathers below!

This Woeful Wipeout Made Evel Knievel an Instant Legend In 1967, a bone-shattering spill at Caesars Palace spawned a career in self-endangerment