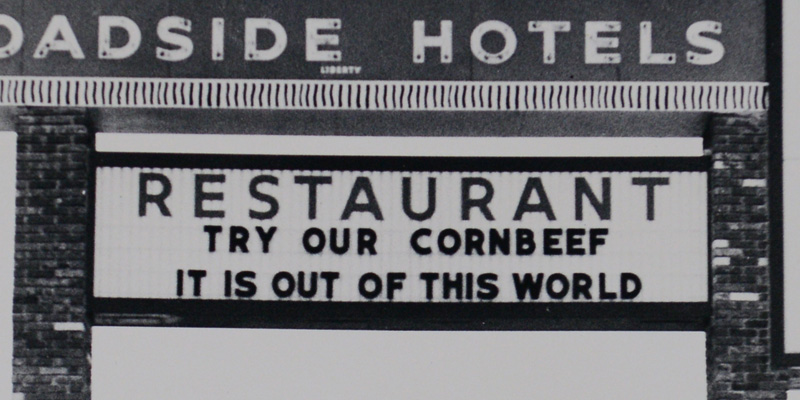 A few crumbs can go a long way. Learn what happened when one astronaut snuck a popular lunchmeat onto the Gemini III in 1965.

During ANTIQUES ROADSHOW’s 2005 visit to Orland, Florida, a guest named Kim brought in a photo of his late father. The picture shows his father standing in front of a hotel he managed, which was partially owned by the seven original Mercury astronauts. Under the name of the hotel the sign reads, “Try our corn beef, it is out of this world.”

True to its word, the corned beef from the Ramada Inn did make its way into space via astronaut John Young, who was part of the two-man crew for the first mission of NASA’S Gemini program. Dissatisfied with the food NASA had to offer on the Gemini III, Young and Kim’s father joked about sneaking a few corned beef sandwiches into the breast pockets of Young’s spacesuit. After testing how best to wrap the sandwiches, they succeeded in pulling off their stunt. Once in orbit, Young pulled out his lunch to show fellow astronaut Gus Grissom, only to discover that edible sandwich bread is not compatible with the conditions of earth orbit. Kim explained:

“Well, they pulled it out, and the sandwich had just disintegrated. There was caraway seeds and crumbs and everything everywhere. And nobody probably would have heard anything about this had it not gotten back down to ground.”

Upon landing, the U.S. House of Representatives Committee on Appropriations launched an investigation into the corned beef mishap, stating that Young’s crumbling meal was “a $30 million-dollar sandwich.” Not only could the crumbs have damaged the flight equipment, but the reputation of the space program as well. As Young wrote in his 2012 memoirs:

“A couple of congressmen became upset, thinking that, by smuggling in the sandwich and eating part of it, Gus and I had ignored the actual space foods that were up there to evaluate, costing the country millions of dollars.”

Although the ill-conceived prank caused a slight backlash against Young, Kim said his father’s name was kept out of it.

Collectibles expert James Supp appraised the photo of Kim's father, as well as several other autographed photos of astronauts, for a total auction value of $40,000 - $50,000.

See one of the corned beef sandwiches below!