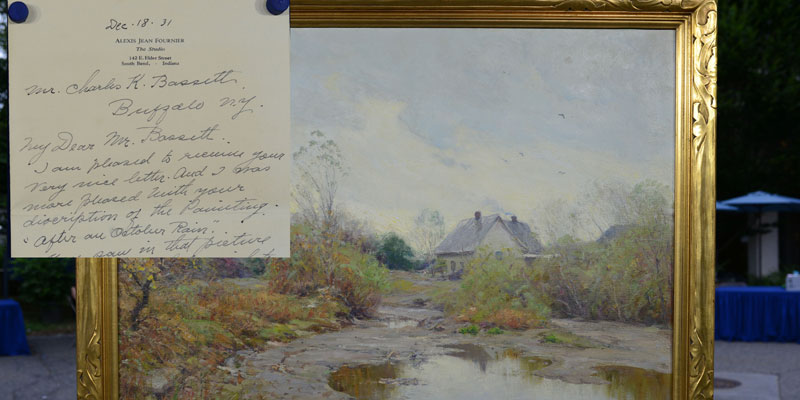 Read a letter by artist Alex Fournier addressed to a client that expresses Fournier’s involvement in the Barbizon artist movement.

At ANTIQUES ROADSHOW’s 2019 event at the Winterthur Museum in Delaware, a guest named Kathleen brought in a 1928 Alexis Fournier oil painting, titled After an October Rain, which she had inherited from her late grandfather in 1983. Kathleen explained how her grandfather, a resident of Buffalo, New York, purchased the picture in the 1930s during the time of his involvement with the Roycroft group within the Arts and Crafts movement. The oil painting was accompanied by a letter written by the artist addressed to Kathleen’s grandfather.

Paintings and Drawings appraiser Kathleen Harwood explained that Fournier grew up in Minneapolis before moving to Paris to study at the Académie Julian. He drew inspiration from the romanticized view of nature favored by the Barbizon painters, and upon returning to the United States, became involved with the American Barbizon movement. As Fournier’s career progressed, he grew interested in the Arts and Crafts movement and became a resident painter of the Roycrofter group — a community within the Arts and Crafts movement.

In the letter addressed to Kathleen’s grandfather, Charles Barrett, Fournier speaks to the personification he gave to the natural elements in After an October Rain — proof of his implementation of Barbizon themes in his work.

“You saw in that picture a subtle thing that I wish to express. You say, ‘the wind was blowing.’ Most any one would see that there is a house there. But not everyone would see what I tried to express. A mood. You are evidently not only an observer but also an ‘out door man.’”

I am pleased to receive your very nice letter. And I was more pleased with your description of the painting, "After an October Rain." You saw in that picture a subtle thing that I wish to express. You say "the wind was blowing." Most any one would see that there is a house there. But not Every one would see what I tried to Express. A mood. You are evidently not only an observer but also an "out door man."

I painted this picture in the autumn of 1928 while on a painting pilgrimage in “the hills of Brown,” which is Brown Co. Ind., where there is an art colony at Nashville, Ind. A little village far away from even a railroad, in the extreme southern part of Indiana.

Quite a few artists have their permanent studios there. Other come from Chig. & far distant places. As yet it is just nature unspoiled by man.


Of course I presume you know that I have a house & studio at East Aurora N.Y. where I go each summer. So far as I know now my plans are to go to Brown County for a couple of weeks painting in spring and expect to be in East Aurora late in May. And I shall be most pleased to have you and your friends come to my studio if it will please you to do so.

Again thanking you for meeting me. I am very sincerely yours