C. Peet: Do You Know the Artist's Name? 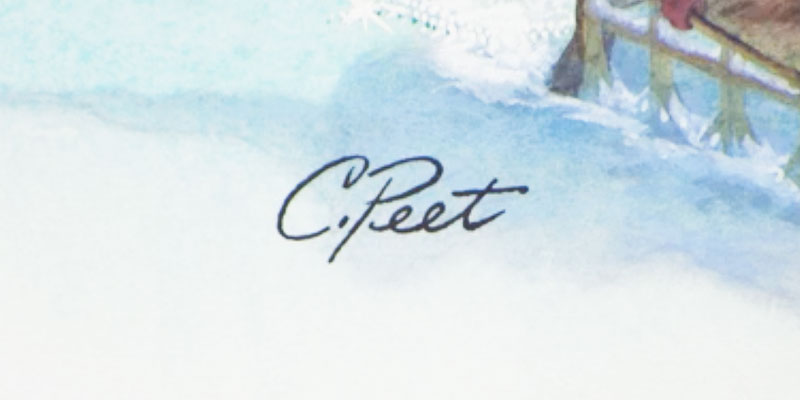 Even to poster expert Nicho Lowry, the first name of artist "C. Peet" has always been unknown. When a guest brought a poster maquette of Peet's work to ROADSHOW, the question arose once again. Now ROADSHOW wants your help in finding the answer — do you know C. Peet’s first name?

During ANTIQUES ROADSHOW’s April 2019 visit to the Desert Botanical Garden, in Phoenix, Arizona, a guest named Belle brought in a ca. 1945 Sun Valley poster maquette by an artist about whom relatively little is known, and who signed his work "C. Peet."

The image originally belonged to Belle’s father-in-law, who hung it in his office in the Union Pacific Railroad outlet in Sun Valley, Idaho — home to the first destination resort for skiing in the United States. According to Belle, the artist was commissioned by Union Pacific to create marketing posters for the ski resort in Sun Valley. The maquette artwork Belle brought to Phoenix was a mock-up for one of those now-famous posters.

Although Belle referred to the artist as “Creighton Peet,” Prints & Posters appraiser Nicho Lowry was quick to clarify his own uncertainty:

“It’s a very known poster. It's a poster that I have handled many times before. Nobody who I know in the entire poster industry — nobody I know throughout the entire world of Sun Valley collectibles — was ever able to identify for me what this artist's first name was. I am certainly aware of another poster that he did for Union Pacific. But not more than that. To my knowledge, what research I could do today, there is no reference of anybody named Creighton Peet. So, in my mind, he will remain "C. Peet."

Lowry then did what anyone at ROADSHOW would do if they were stumped — he asked the audience.

“If somebody out there who's watching now knows more about it, this would be a great way for the entire community to learn.”

So, on behalf of Nicho Lowry and the Prints & Posters community, ROADSHOW wants to know:

Do you know the artist’s first name?

(Editor's Note: This article originally used "Crayton" as the spelling of the artist C. Peet's possible first name. It has been changed to "Creighton" to reflect the more common spelling.)