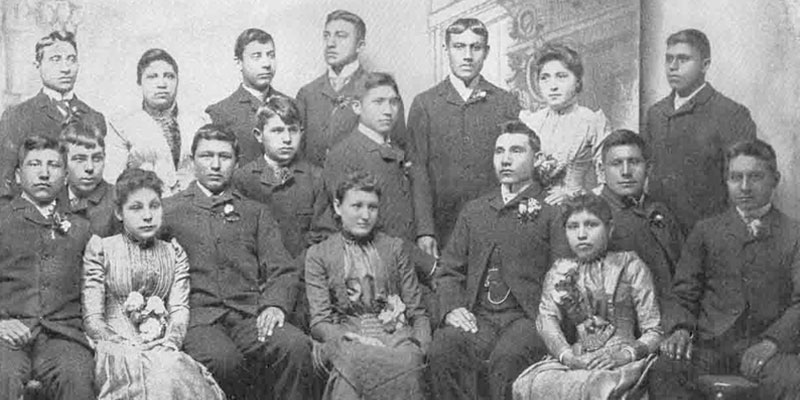 By the late 1800s, forced assimilation — in the form of compulsory boarding schools — had become another tool the U.S. government used to address what mainstream America considered the “Indian problem.”

In years preceding the era of Indian boarding schools, under the doctrine of “manifest destiny,” the U.S. government was continually engaged in removing Native American tribes to take over their land, pushing them further and further west, and in battling those tribes that were resistant to being removed.

By the late 1800s, assimilation became another tool the U.S. government used to address what mainstream America called the “Indian problem.” One tactic of the program of assimilation was making indigenous children attend boarding schools that forced them to abandon their customs and traditions, with the goal of having them adopt mainstream America’s beliefs and value systems.

The first federally run Indian boarding school was the Carlisle Indian Industrial School in Pennsylvania, in operation from 1879 to 1918. Army officer Richard Henry Pratt founded the school, which became the template for instituting a system of forced “Americanization,” using strict militaristic discipline to sever Native American children from their native heritage. It was Pratt who coined the phrase “kill the Indian, save the man” — a philosophy that permeated Indian schools for generations.

This system of assimilation meant that children were separated from their families and communities for long periods of time. The government oversaw around a hundred Indian boarding schools, both on and off reservations. Tens of thousands of children were either forced to attend these schools or went because there was no other school available to them.

Related Article: How American Indian Reservations Came to Be

The schools prohibited the children from speaking their tribal languages, required them to wear American-style dress and hairstyles, and made them give up their native religion for Christianity. In addition to standard academic lessons in subjects like reading, writing and math, students learned trades that were marketable in American society, such as carpentry for boys and housekeeping for girls.

By the 1920s, support for the Indian boarding schools’ strict assimilationist methods was declining. The 1928 Merriam Report recommended discontinuing European-American-centric cultural courses in schools, and the Indian Reorganization Act of 1934 promoted actions that would give tribes more opportunity for self-determination and self-governance.

The book, titled A Courier in New Mexico, which Martin Gammon appraised at the ANTIQUES ROADSHOW event at Desert Botanical Gardens in Phoenix in April of last year, was made by two teachers and their Native American elementary school students at Tesuque Pueblo school in 1936. The rare book is an artifact of this transitional period.

In the following decades, Pueblo leaders fought to gain control of the Santa Fe Indian School. Today, the school is tribally managed, where according to their website, “sovereignty, Native cultures and communities are the foundation.”

As of 2020, there are seven federally funded boarding schools in the United States. The Bureau of Indian Education operates four of them, and three are tribally controlled.

Article: How American Indian Reservations Came to Be