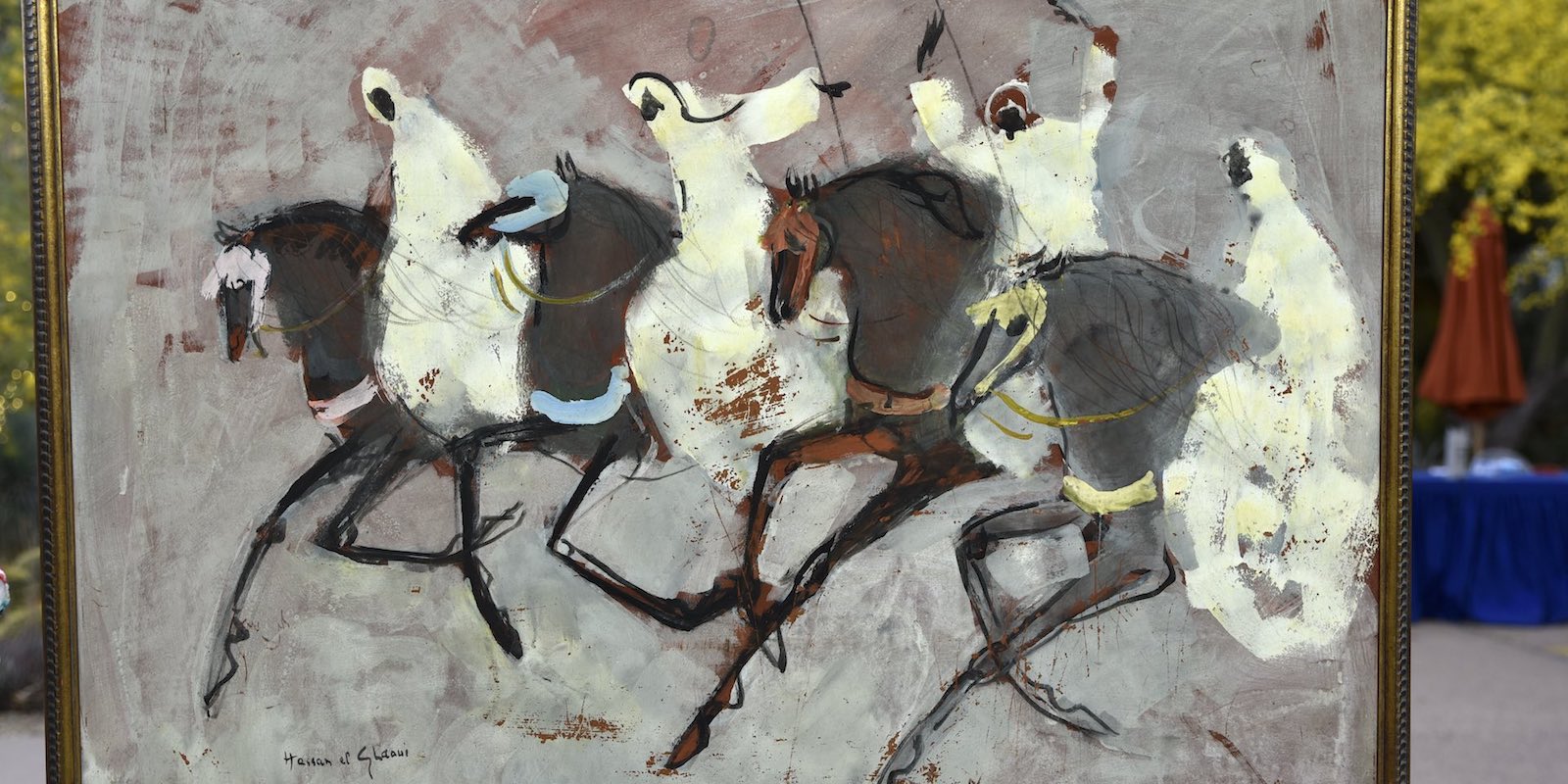 Paintings expert Gene Shapiro explains how the biography of Moroccan-born artist Hassan El Glaoui was deeply intertwined with the history of the country itself — and comes with a fascinating connection to Winston Churchill for good measure.

AS A PAINTINGS APPRAISER at the Desert Botanical Garden ANTIQUES ROADSHOW last April, I had the enjoyable position of seeing and valuing local artworks, all the while surrounded by the beautiful Phoenix landscape. At a late point in the day, one guest brought in a painting that seemed to fit in especially with our location. It was a painting of Bedouins on horseback, riding through what I imagined to be a place very similar to our own. I found the uniquely muted colors and strong modernist composition in the painting to be quite intriguing, and upon seeing the signature confirmed it to be a tempera painting by the great Moroccan artist Hassan El Glaoui.

El Glaoui’s paintings of horses and riders in the Tbourida tradition not only paid homage to his country and family, but with their dynamism also managed to capture the attention of Western viewers.

This work was one of the artist’s celebrated "Fantasia" paintings, depicting a beloved Moroccan tradition involving horsemen. The powerful impact of the painting, along with the fascinating history of the artist, and his involvement with world figures such as Winston Churchill — not to mention the fact that the painting had been a gift to the guest Lucy’s father from King Hassan II — made this artwork an opportune one to film. In our talk together on camera, Lucy and I went through all of the above, before I pleasantly surprised her with an insurance value of $75,000 for the painting, given the current demand for paintings by El Glaoui.

The biography of Hassan El Glaoui (1924 - 2018), one of Morocco’s most important modern artists, is deeply intertwined with the history of that country itself. Hassan was born in December 1924 in Marrakesh, the son of His Excellency Hadj Thami El Mezouari El Glaoui, the last Pasha of Marrakesh. Thami el Glaoui, known also as Lord of the Atlas (in reference to the High Atlas Mountains), and nicknamed the Black Panther, descended from one of the oldest tribes of the Berber people.

Having consolidated power through turbulent times, Thami El Glaoui became one of the richest men in the world, with much of Morocco’s wealth and industry passing through his hands. A frequent visitor to Europe, and known for his charm, Thami El Glaoui was also friends with the elite of European society, many of which visited him in Marrakech.

A Helpful Nudge from Churchill

One frequent visitor of Thami El Glaoui to Marrakesh, who had an outsize influence on the life path of his son Hassan, was Winston Churchill. Indeed, the Pasha attended the coronation of Queen Elizabeth II as Churchill’s guest. On one of his visits to Marrakesh, where he would often paint himself, Churchill saw the work of Hassan in the office of his father. It was well known that the father desired an administrative and political role for Hassan, but the influence of Churchill on his father was instrumental in establishing Hassan’s chosen path.

Churchill recommended that Hassan pursue his artistic passions, and emphasized that this would not necessarily interfere with his career. He also was instrumental in getting Hassan’s work noticed by Anson Conger Goodyear, co-founder of the Museum of Modern Art in New York. 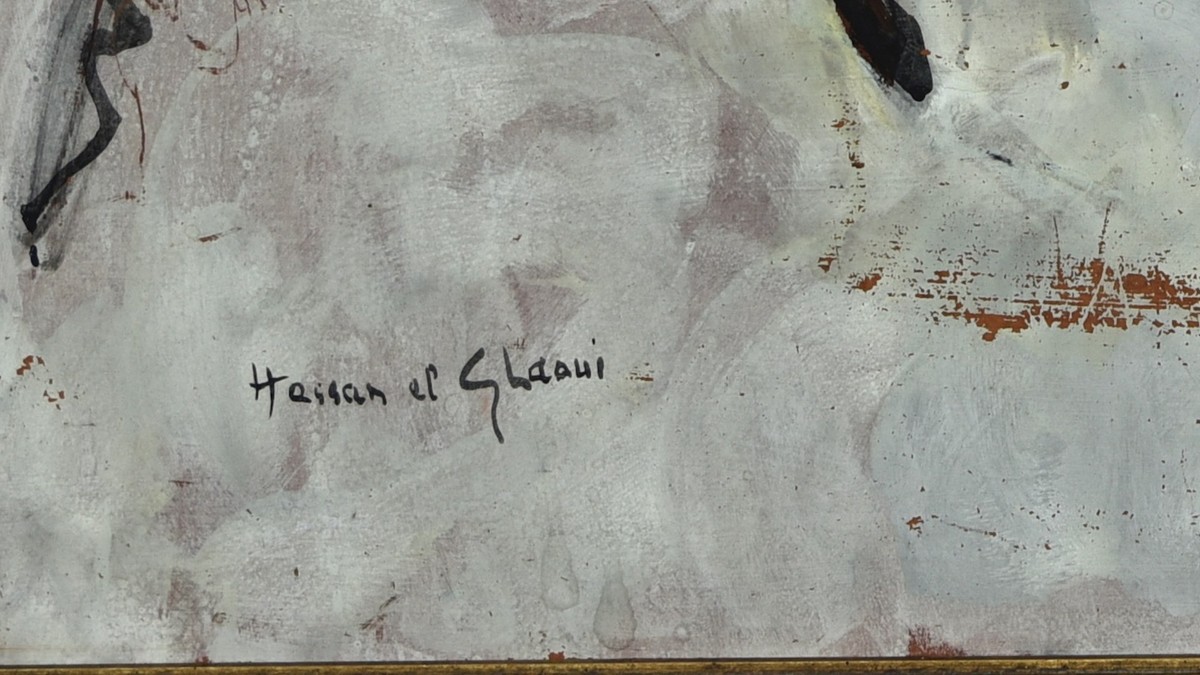 This intersection of political power and fine art was profoundly influential, and Hassan would leave for Paris in 1952 to devote himself to the study of art, where he studied at the École des Beaux-Arts under Jean Souverbie and Émilie Charmy, living and working in France until he returned to Morocco in 1965.

That this connection with Churchill was more than a chance encounter is evidenced by exhibitions such as Meetings in Marrakesh, a joint exhibition of El Glaoui’s and Churchill’s works held in London in 2012 at the Leighton House. One should also note that after the death of his father in 1956, his family’s wealth was confiscated, and Hassan did not live the life of luxury that was associated with his family’s name, living in a small apartment outside of Paris.

Despite these tribulations, during the 1950s and 1960s, El Glaoui’s work was exhibited at some of the most prominent galleries in the world. These included Wildenstein and Hammer Galleries in New York, and Galerie Andre Weill and Petrides in Paris.

While his work would vary in subject overall, El Glaoui became particularly famous internationally for his depictions of Moroccan traditions. One of his most popular subjects was the painting of horses, particularly riders on horses taking part in the tradition of Tbourida. Known in the west as Fantasia performances, these intensely exciting and dramatic actions would involve the horse riders in traditional clothes charging with muskets and firing them simultaneously.

El Glaoui’s paintings of horses and riders in this tradition not only paid homage to his country and family, but with their dynamism also managed to capture the attention of Western viewers. His paintings blended ancient traditions with modern attributes of painting, with bold but sparse colors, and a distillation of movement in shapes and colors.

Hassan El Glaoui died in 2018, and since his passing there has been continued interest in his paintings in Morocco and abroad. An important retrospective exhibition of his paintings, Hassan El Glaoui: Le Sel de ma Terre [Hassan El Glaoui: The Salt of My Earth] with more than 100 works by the artist, was held in 2019 at the Mohammed VI Museum of Modern and Contemporary Art in Rabat, Saudi Arabia, to popular acclaim.

In looking at the paintings from this exhibition, which included not only his Fantasia-related compositions, but also portraits and landscapes, one revels in the extent to which one artist’s oeuvre can so powerfully capture the essence of a land and its people, and it is for this that El Glaoui’s artworks are so justly celebrated.

About the Author Gene Shapiro
Gene Shapiro is a paintings appraiser on ANTIQUES ROADSHOW and president of Shapiro Auctions in Mamaroneck, New York.
More from PBS