Get a Closer Look at the Franklin D. Roosevelt Archive 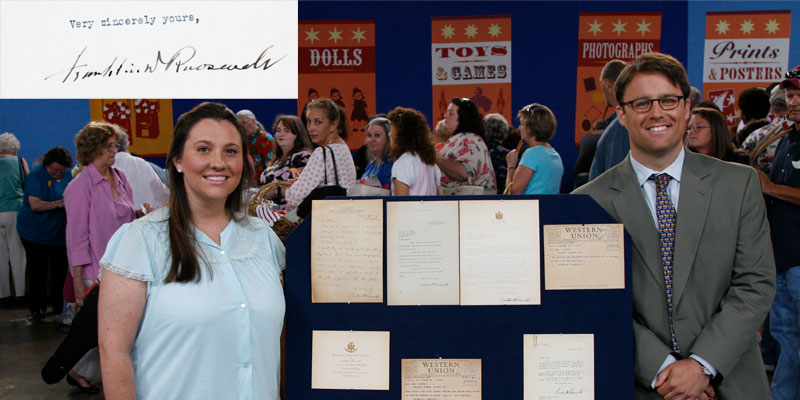 An up-close look at an archive of letters and telegrams written by President Franklin D. Roosevelt.

At the 2006 ROADSHOW event in Mobile, Alabama, a guest named Ashely brought in an extensive archive of telegrams, letters, and programs written both by and to Franklin Delano Roosevelt, who served as the 32nd U.S. president, from 1933 until his death in April 1945.

The contents of the documents – 60 to be exact – ranged from FDR's life in the 1920s, before he was elected president, through his nearly four terms in the White House.

Ashley told Books & Manuscripts appraiser Tom Lecky how in the early 1990s, she and her mother were at an estate sale and came across a box containing old newspaper clippings, photographs, and the Roosevelt items. Ashely and her mother only paid five dollars for the box and its contents.

Lecky noted how all of the letters written by Roosevelt were addressed to a man named John S. Cohen, who served as the editor and publisher of The Atlanta Journal:

“It was in Roosevelt’s best interests to be in touch with him, because he could, in his position, get the word out about his ambitions.”

Due to the personal details of the letters and the long span of Roosevelt’s life they cover, Lecky gave the collection an auction estimate of $15,000 to $20,000.

Read three of Franklin D. Roosevelt’s letters to Cohen below!

Thank you for your wire – 8:30 pm is all right + I take it I can finish + leave by 9:30. I have no photo! I will try & write out something long hand but have no stenographer here. I will send you about 1500 words on Monday – will you have it printed & send W the other papers & W the press associations?
Sincerely,
Franklin D. Roosevelt

Many thanks for your nice letter of November 16th. Apparently my election is confirmed by my latest return. I wish much that I could come to Atlanta when Governor Smith stops over but it is absolutely impossible, as I have and shall have such a short time at Warm Springs that I cannot miss a single day of exercising. I hope that you will run down here without fail before I leave, a little over two weeks hence.

HON JOHN S COHEN=
ATLANTA JOURNAL ATLA=
I AM TRHILLED AND DELIGHTED YOU CERTAINLY DID A SPLENDID
JOB AND AI AM VERY GRATEFUL =
FRANKLIN D ROOSEVELT.