Daredevil Kitty O’Neil was a professional racecar driver and stuntwoman who also happened to be deaf. A trailblazer in the entertainment industry, she made history with her death-defying speeds, leaps and courage. In the 1970s, O’Neil was one of the first women accepted into Stunts Unlimited – Hollywood’s leading stunt agency – working as a double in movies like “The Blues Brothers” (1980), “Airport 1975” (1975), “Damien: Omen II” (1978), “Foul Play” (1978), and “Smokey and the Bandit II” (1980), as well as television shows like “Wonder Woman” and “The Bionic Woman.”  Here’s a list of some of her record-breaking feats: 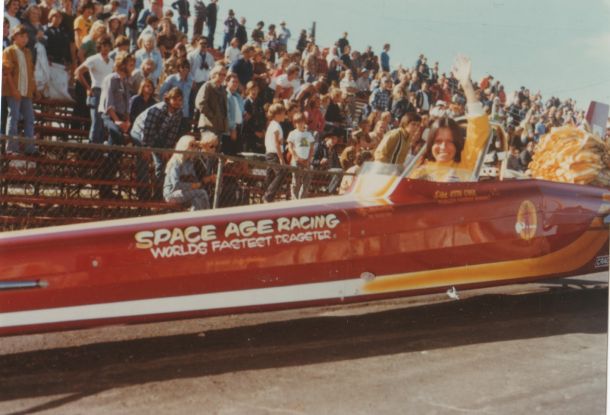 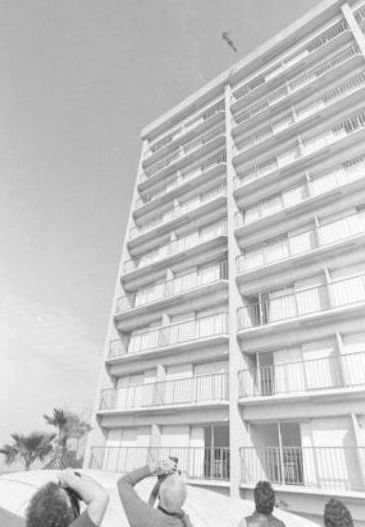 O’Neil was especially known for her high-fall skills. One of her most memorable stunts was in 1979 for a “Wonder Woman” episode, “Phantom of the Roller Coaster.”

From 12 stories (127 feet) high, she leapt off the Valley Hilton hotel in Sherman Oaks, California onto an airbag atop the pool deck — setting a new high-fall record in the process (pictured right).

Deciding that wasn’t enough, she broke her own record less than a year later falling 180 feet onto an airbag from a helicopter.

“If I hadn’t hit the center of the bag, I probably would have been killed,” she said to The Washington Post in 1979.

2. Setting Herself on Fire 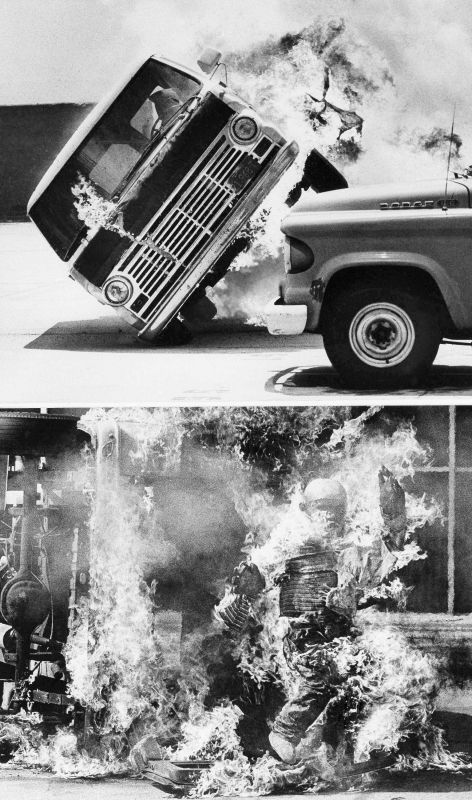 A car roll is a a stunt in which an explosive charge propels a vehicle to flip over multiple times. In a 1979 interview with The Washington Post, O’Neil detailed the procedures of this kind of dangerous performance. Wrapped in a “Nomax” fire suit, given a three-minute tube of oxygen, spread with glue, and then lit with a torch, O’Neil would perform the spectacle. Once the action was complete, the flames needed to be quickly extinguished before the fire could penetrate the suit.

In 1977, she combined her skills by setting the record for both the longest and highest fall attempted by a woman while afire, completing a 112-foot drop in a fully ablaze fire-suit.

Pictured left from a 90-minute special on stunts called “Superstunt” in Los Angeles (1977), Kitty O’Neil crashes into a parked car with her van which explodes, engulfing the van with flames (upper photo). In the lower photo, O’Neil exits the van afire.

“Danger demands using everything you’ve got to overcome it. That is attractive,” said O’Neil.

3. The Fastest Woman in the World – On Land & Water

In 1970, O’Neil took up racing on water — setting the official women’s water ski speed record at the time, 104.85 miles per hour. She then turned to off-road racing, driving cars and motorcycles in events like the Mint 400 and Baja 500. 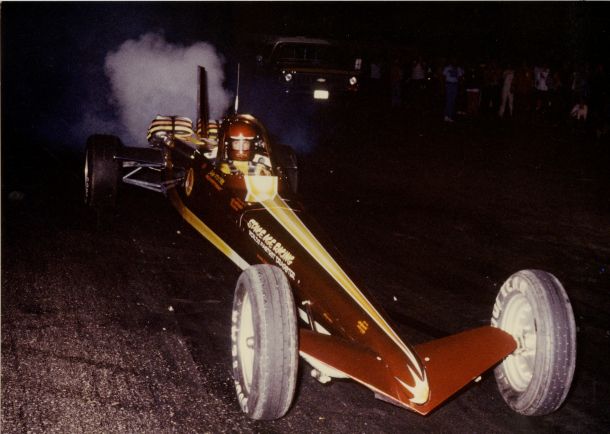 On December 6, 1976, O’Neil became the fastest woman in the world. Speeding across Oregon’s Alvord Desert in a three-wheeled rocket car called the SMI Motivator, she clocked an average of 512.710 mph. (For an official land-speed record, the driver must make two passes across a measured course, one out and one back; officials then average the two speeds.) The record stood until 2019 when it was broken by “Mythbuster” Jessi Combs, who sadly did not survive the attempt.

While in the driver’s seat, O’Neil had barely pushed the Motivator to 60 percent of its capacity. She had blasted past the women’s land speed record by almost 200 mph with some observers claiming that during parts of the run, the Motivator was clocking a top speed of more than 618 mph.

To give some context, the average passenger airplane cruising speed is about 575 mph. And O’Neil was ready for even more speed. She later quipped in an interview with Midco Sports Network, “Not fast enough.”

In 1977, O’Neil piloted a jet-powered boat to a record speed of 275 mph, becoming the fastest woman on water. That same year she set the fastest quarter mile in history in a rocket dragster at 3.22 seconds and was the only woman qualified for international motorcycle competition when the Fédération Internationale Motorcycliste granted her a professional license.

In a new digital series, musician and disability inclusion advocate Lachi explores the cultural contributions of people with disabilities and how they transformed America. This pilot episode investigates the amazing life and accomplishments of deaf stunt legend and speed racer Kitty O’Neil. Help us shape the series by taking this survey after you watch: https://www.surveymonkey.com/r/6D55SZ2 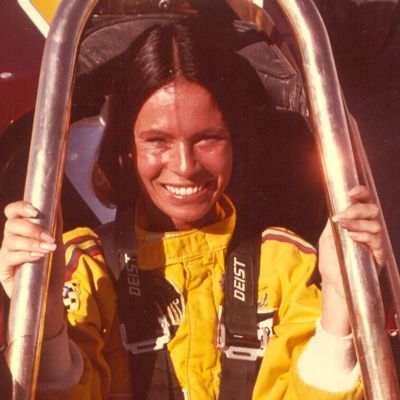 Garrison Keillor: The Man on the Radio in the Red Shoes
Alfred Hitchcock
Louisa May Alcott: The Woman Behind 'Little Women'
Billie Jean King
Clint Eastwood: Out of The Shadows
F. Scott Fitzgerald: Winter Dreams