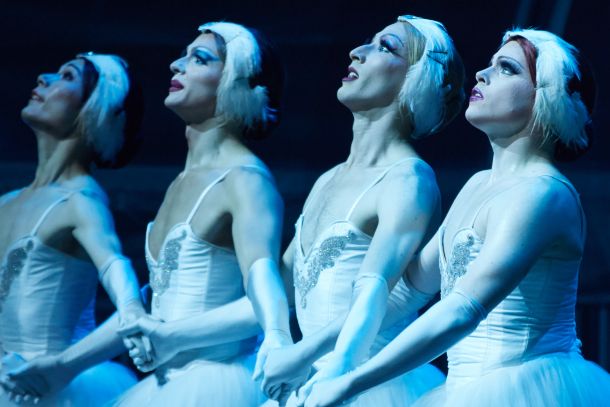 In 1974, the gay liberation movement was in full swing in New York City. Four years had passed since the first gay pride parade marched 15 blocks from Greenwich Village to Central Park. The march evolved into a daily fight for the queer community to be recognized by the mainstream as fellow human beings. Their strategies became more and more creative. Not only did they push for rights on the streets, on the stage, too.

As journalist Andrew Solomon explains in The New York Times, “they were breaking the only tested model then available for queers (the word was still an insult at that time), which was secrecy.” By proudly and fiercely declaring themselves to the world, the gay community demanded visibility. To be open about their identities was bold, brave and revolutionary.

It was during this time that one group took center stage to influence change, in the form of a drag ballet. Les Ballets Trockadero de Monte Carlo, also known affectionately as The Trocks, was founded by a group of gay men who aimed to use ballet to bring people together, subvert expectations, and prove that men could be anything.

The Trocks, who mixed traditional ballet with comedic performance, became a smash success in New York City. Crowds flocked to find out if the rumors were true (namely that men could actually dance en pointe without crashing to the ground), and found themselves entranced by the company’s spectacular dancing and knee-slapping comedy.

Today, The Trocks are still performing, and have become an international sensation. But in 1974, they were a small group of determined male ballerinas, dancing in makeshift loft stages off-off Broadway. Little did they know they were on the brink of breaking enormous barriers.

Here are three ways in which The Trocks challenged straight America’s perception of gay men:

“In traditional companies you end up dancing the male roles behind a girl,” explains Trocks dancer Albie Pretto. Traditionally, males can not be prima ballerinas, dancing en pointe (putting all of their weight on the tips of their toes in specialized shoes), and performing the star roles of the ballets. Their main role is to elevate the female stars, which they do in soft shoes, and with simpler moves.

In The Trocks, though, a man could perform as the Swan Queen, and their performance could be just as exquisite and just as moving as a female ballerina’s.

“Being in the company, we were pushing the limits of the definition of what men did,” said founding member Roy Fialkow. “What Ballet Trockadero has done over the years is turned this notion of what is beautiful in ballet kind of on its head.”

This was a huge risk. Ballet is deeply rooted in honored tradition, which is not meant to be challenged. In the beginning, The Trocks were looked down upon by the big ballets.

“A lot of the muckety-muck dance establishment didn’t necessarily like us,” says dancer Peter Anastos. “They thought what we were doing was terrible and insulting and wrong. But that’s actually not what we were up to. We were up to celebrating ballet and saying this is the greatest thing in the world and it can stand a little parody.”

If anything, the criticism pushed The Trocks to work even harder. They became determined to subvert stereotypes, and to prove that pushing limits did not diminish the classic beauty of ballet.

Audiences were struck by the performances, and ultimately found that the stories were not diminished when a man performed the starring roles. The power of the ballet, and its impact on the heart and soul, surpassed gender.

“The ballerina had always been up on a pedestal — the essence of beauty, the perfect body. And we were coming along and saying you can do Swan Lake with a short, fat Black man and it’s still realistic and there’s still a reason to it. The role is still the same, it’s just the visual is different,” said Anastos.

In the early years, The Trocks performed on makeshift loft stages for late night performances. It wasn’t long, though, before the company increased in popularity, and began to outgrow those tiny stages and midnight shows. Soon, they were approached by an agent, Sheldon Soffer, who featured the company on the front page of his brochure, and booked the troupe tour dates across the country.

The first performance was in South Bend, Indiana. This could not have felt like a farther cry from New York City.

“We were really frightened,” recalls Anastos. “How were we going to take this show, which is a total downtown phenomenon, and move this to South Bend, Indiana? What is going to happen to us?”

The company made the decision to perform anyway. They were determined to triumph over their fears. Still, this was the 1970s, and while the gay liberation movement was blossoming in New York City, it was dangerous to be openly gay in most of the rest of the country.

“When we left New York, we said goodbye to all of our friends,” said Anastos. “We were sure we would never come back. They would kill us out there on the road.”

And so we landed in South Bend, Indiana. They had just built this beautiful performing arts center. We thought, ‘Oh my god, we’re going to desecrate the building and they’re going to run us out of town on a rail.'”

To the Trocks’ surprise, the show was a smash hit. The audience roared with laughter and was moved to tears. The Trocks continued their tour around the country, hitting more towns in traditionally conservative midwestern America, and found success at every show.

The biggest victory, though, was that the Trocks managed to open the hearts and minds of audiences who had never even seen an openly gay man before, and certainly not a male ballerina in drag.

“There’s no question that people who came to the Trocks who laughed, who really thought we were a great show, also found that gay people don’t all bite. Our show was just so benign and it was so much fun and there was no message of bitterness or hate,” said Anastos. “And I think in a way people said, you know these gay people aren’t so bad after all. They made us laugh. Grandma loved it. The kids loved it. And I think they did have a different perception of gay people.”

In the 1970’s, drag culture was evolving. Within the LGBT community, men were encouraged to dress in drag when they felt compelled to, and their drag personas were considered an equal (and welcomed) part of their identity. Wearing drag was a symbol for living freely and unapologetically. It was celebrated.

In mainstream culture, drag was still perceived as inappropriate and offensive in the 1970s and men in drag risked their lives just by walking down the street. When The Trocks performed, they turned mainstream America’s perception of drag on its head. They welcomed audiences to celebrate drag as something positive and influential. When dancer Kevin Garcia watched the Trockederos perform for the first time, his whole world expanded before his eyes. “The first time I saw the Trocks,” he remembered, “I was awed and my reaction was seeing heaven open. And I just looked at my parents and I was like, ‘That’s the perfect place for me.'”

Member Duane Gosa felt out of place his entire life, until he joined The Trocks. “Growing up, not fitting in, and wondering why I didn’t like to play football or basketball and my dad was the coach of everything that I played… So being able to be in a company like this where I can freely be Black, and gay, and a dancer on stage — and be good at it — is a great thing for young people to see. I am fortunate enough to show that this is possible.”

By simply showing up each day and performing for an audience, The Trocks broke barriers for gay men across the country, and eventually, the globe. They lived their truth openly for everyone to see. And through their bravery, they taught others to embrace joy too, regardless of the risk.

“These guys decided, we’re going to dance,” says journalist Eric Marcus. “Taking something that’s so formal and using it to give joy to people, and joy to themselves, and create something that was a form of resistance.”

SHARE
STREAM WITH PASSPORT
Ballerina Boys
About the Master 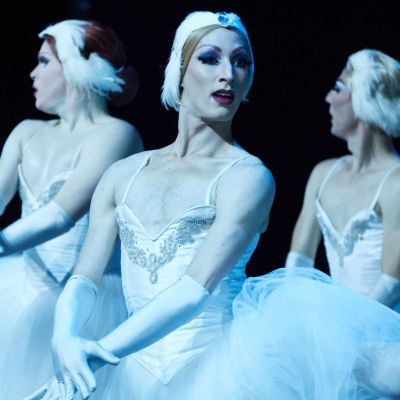 How ballet helped a ballet dancer with autism
Clip | What goes through a drag ballerina’s mind while dancing?
Clip | Watch these drag ballerinas get ready for a show
Full Episode | Ballerina Boys