Q: Did you always want to make a film about Alfred Stieglitz?

To be frank, no. For many years I resisted the Stieglitz subject. I had produced and directed a widely-seen hour-length documentary on Georgia O’Keeffe shown on PBS on November 7, 1977 in celebration of the artist’s 90th birthday and then as the first film of my “Women in Art” series. It is now part of AMERICAN MASTERS and it holds the record for sales in home video on the “films on art” category. Stieglitz discovered, photographed the artist, showed her work in his galleries and married her. Since Alfred Stieglitz figures importantly in the O’Keeffe film I felt that I had explored this territory. I thought I knew the material and I was not interested in repeating myself. Why go back to material I had already dealt with when there were so many new and challenging subjects that I had the fortunate opportunity to explore on film after doing the O’Keeffe program: Picasso, Carl Sandberg, Eugene O’Neill (for AMERICAN MASTERS) among others.

Q: Why did you make this film? What changed your mind?

During the many years since the O’Keeffe film, my attitude toward Stieglitz as a film subject changed dramatically. My knowledge of the depth and breadth of his achievements had greatly expanded together with my admiration and respect for his importance in 20th century culture. Based on newly published biographies, critical studies, exhibitions and personal contacts, I gradually realized that my former perception of Stieglitz had been very limited; that there was a whole new fascinating, important and little-known story to be told.

Q: What led to this actual AMERICAN MASTERS production?

We all know there is a huge difference between your own interest in a subject and the production of a film on that subject – it was Susan Lacy, Executive Producer of Thirteen/WNET’s AMERICAN MASTERS series, who made the difference. For years, Susan had tenaciously believed in Stieglitz as a major figure in the art and culture of our century; that he was a deserving subject for AMERICAN MASTERS. She also had long believed that I was the natural choice as filmmaker. The millennia attention in the press given to Stieglitz proved decisive. Susan asked if I would be interested in producing and directing a film on Alfred Stieglitz for AMERICAN MASTERS. I was ready. Four years and two National Endowment for the Humanities partial funding submissions later (the second one successful), the story of Stieglitz’ life, his work and his primary role as a missionary for modern art in America will be told.

Q: Is there anything special that contributed to your enthusiasm for the project?

There definitely is! We knew we had an ace up our sleeve – unique, invaluable, never-seen film footage of Georgia O’Keeffe speaking about Alfred Stieglitz. In 1980, at the request of O’Keeffe herself, I had flown to New Mexico with a small film crew and interviewed the artist at great length about Stieglitz. On camera in her home, her garden and her studio, she speaks frankly and intimately, her reminiscences salted with her dry humor. O’Keeffe talks about Alfred Stieglitz – the student, the man, the photographer, the pioneer in the introduction of avant-garde European art to American, the defender of struggling young American modern artists; her own views on the artists of the famed “Stieglitz circle” and of their life together. This film, rare during her lifetime, became unique after her death in 1986. The 1980 project for a film about Stieglitz using this footage was never realized. For 19 long years, eight large flat reels of 16 mm film (work-print and synced mag track) lay buried in the storage room of my house in Westport, CT. Buried, but not entirely forgotten.

Q: When you started production on this Stieglitz program, what condition was the film in? Had it deteriorated?

By some miracle, both film and sound track were still in excellent condition and, even more miraculous, the original negative was located by DuArt in their vaults, so we could transfer to digi-beta directly from the negative. We were very fortunate in the quality and variety of our other on-camera interviews, but O’Keeffe’s presence, like a vivid thread throughout the film, gives “Alfred Stieglitz – The Eloquent Eye” not only the testimony and insights of a contemporary witness to Stieglitz’s legendary career, but the pungent remarks of a close participant and protagonist with a remarkable memory.

Oh, many things- that’s what makes filmmaking interesting. For one thing, I was not prepared for the incredible scope of the avant-garde art that Stieglitz showed for the first time in America. – Rodin, Picasso, Matisse, Cezanne – these were familiar, but in addition he exhibited Toulouse-Lautrec, Le Douanier Rousseau, Picabia, Brancusi, African art, Oskar Bluemner, Eli Nadelman, Gaston Lachaise, Gino Severini, Georges Braque, Gordon Craig. I was intrigued to learn that after closing his famous 291 gallery in 1917, he devoted the rest of his life to showing and advocating only American artists, including the great pioneers of American modernism – John Marin, Arthur Dove and Marsden Hartley. I had known, of course, about “Camera Work,” but I was surprised and impressed to find out just how beautiful, avant-garde and,especially, how influential this Stieglitz publication was and continued to be long after its demise in 1917. Above all, it was the exploration of the rebellious, complex, contradictory Stieglitz personality and the polarized intensity of the reactions he provoked that was a new and continually fascinating experience for me.

Q: Is there a connection between your program and the great National Gallery of Art exhibition in Washington, D.C. – “Modern Art and America – Alfred Stieglitz and his New York Galleries”?

Yes, a vital connection: The creator and curator of the National Gallery show, Sarah Greenough, Curator of Photographs there, has been one of our chief advisors from the inception of the Stieglitz television project. Our program covers much of the same material and most of the pictures in her exhibition are featured in our film. We interviewed Ms. Greenough on-camera while she was working on the exhibition. Her vast knowledge of Stieglitz and of the many facets of his achievement clarified and illuminated important sequences: her immediate involvement with many of the same problems we were facing in trying to re-create the exciting pioneering exhibitions at the Stieglitz galleries made her participation exceptionally valuable. We are grateful to all the major sources of photography that gave us full cooperation, however, since the National Gallery owns the famous “key set” of Stieglitz photographs, it was with Sarah Greenough’s guidance and help that we were encouraged to use the Gallery’s beautiful transparencies and authentic copies of Stieglitz photographs unavailable elsewhere.

Q: What gives you the most satisfaction in having created this film?

I think the film, like the National Gallery exhibition, will be a revelation to its audience, changing the perception of Stieglitz forever. It will help to restore his rightful place in the history of 20th century art and culture. We hope that the program will also reveal Stieglitz as a charismatic, complex and fascinating individual “whose idealism wrestled with his human frailties.” It might, incidentally, further serve to bring him out from under the shadow of his wife, Georgia O’Keeffe, this shadow being a phenomenon of recent decades and one that might amuse this unregenerate iconoclast. 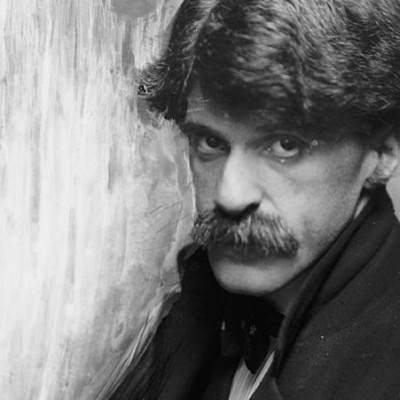