Andy Warhol defined the pop art movement of the 20th Century. His paintings are among the most recognizable images ever produced. 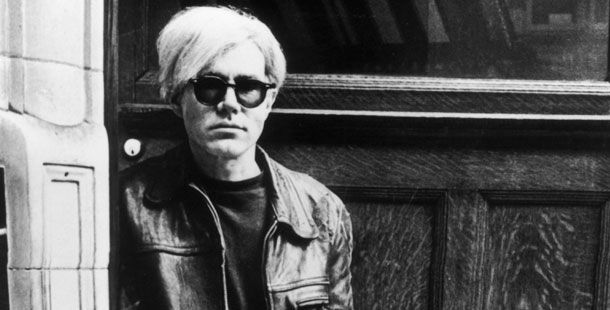 Andy Warhol was born Andrew Warhola on August 6, 1928, in a two-room shack-like apartment at 73 Orr Street in the working class neighborhood of Soho in Pittsburgh, Pennsylvania, to Andrej Warhola and Julia Zavacky Warhola. The youngest of three sons, Andrew attended Holmes Elementary School and Schenley High School, and entered Carnegie Institute of Technology (now Carnegie Mellon University) in Pittsburgh in 1945, where he studied with Balcomb Greene, Robert Lepper, Samuel Rosenberg, and others. He experimented with his name, signing holiday cards “André,” and dropping the final “a” from his family name. He graduated in June 1949 with a Bachelor of Fine Arts degree in Pictorial Design.

Soon after graduating, Warhol moved to New York City to pursue a career as a commercial artist. His first work appeared in Glamour magazine in September 1949. Throughout the 1950s, he became one of the most successful illustrators of his time, and won numerous awards for his work from the Art Directors Club and the American Institute of Graphic Arts. His clients included Tiffany & Co., The New York Times, I. Miller Shoes, Bonwit Teller, Columbia Records, Harper’s Bazaar, Vogue, Fleming-Joffe, NBC, and others. Much of his commercial work was based on photographs and other source images, a process he would use for the rest of his life. He also employed the delightfully quirky handwriting of his mother Julia in many of his works in this period. She won a professional award for her lettering on the LP The Story of Moondog in 1958, and Warhol published a book of her drawings, Holy Cats, in 1957. She was always credited as “Andy Warhol’s Mother.” She left Pittsburgh in 1952 to join her son, and they lived together until about 1971. Warhol painted memorial portraits of her after her death; he also had made a film and shot videotapes of her. 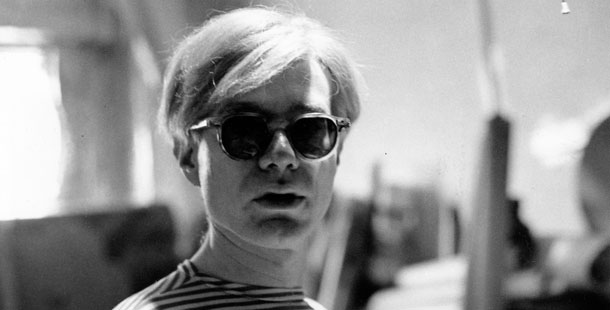 In 1956 Warhol traveled around the world for several weeks, visiting many countries in Asia and Europe. In the late 1950s he began to devote more energy to painting. He made his first Pop paintings, based on comics and ads, in 1961, and then a series of Campbell’s Soup Cans in 1962. These created a sensation in the art world and launched Warhol as a celebrity. Except for a brief period in the mid-1960s, he would continue to paint until the end of his life. He also extended his talents into other fields such as film, publishing, writing, television, and music. By the time of his death, he was one of the most prolific and well-known artists the world had ever seen.

Warhol had a life-long fascination with Hollywood. In 1962 he began a large series of celebrity portraits, including Marilyn Monroe, Elvis Presley, and Elizabeth Taylor. He also began his series of “death and disaster” paintings at this time – images of electric chairs, suicides, and car crashes.

Warhol’s first exhibition of sculptures was held in 1964, with hundreds of replicas of large supermarket product boxes, including Brillo Boxes, Heinz Boxes, Del Monte Boxes, Mott’s Boxes, and Kellogg’s Boxes. By this time, his new studio, painted silver and known as the Factory, was becoming the place to be in New York; parties held there were mentioned in gossip columns throughout the country. By the mid-1960s he was a frequent presence in magazines such as Newsweek, Time, and Esquire.

In 1965, Warhol was the first artist to exhibit video as art. He loved its immediacy, and eventually filled about 2500 videotapes, including Factory Diaries, Phoney, and others.

At an exhibition of his Flowers paintings in Paris in 1965, Warhol publicly announced that he was retiring from painting to pursue filmmaking, although he continued to make editions of fine art prints, and also sculptures. However, he began painting again in 1966. He broadened his activities into the realm of performance art with a traveling multimedia show called The Exploding Plastic Inevitable, which featured the rock and roll band The Velvet Underground. The EPI has been credited by some with the invention of the psychedelic light show as nightclub entertainment. The Velvet Underground went on to become one of the most influential rock bands in history. During this time, Warhol briefly operated a dance club in Manhattan called the Gymnasium, which featured exercise equipment on the dance floor.

In 1966 Warhol exhibited Cow Wallpaper and Silver Clouds at the Leo Castelli Gallery. The Cows were Day-Glo colored, and the Clouds were floating silvery balloons shaped like pillows. Warhol covered the exterior of Stockholm’s Moderna Museet with Cow Wallpaper in 1968.

On June 3, 1968, Valerie Solanas, a writer who had appeared in Warhol’s film I, a Man (1967), came into the studio and shot Warhol in the chest, apparently because of a play she had written. He recovered from the near-fatal shooting after a five-hour operation. While recuperating he painted a large series of portraits of Happy Rockefeller, the wife of the Governor of New York.

Warhol self-published a large series of artist’s books in the 1950s, but his first mass-produced book, Andy Warhol’s Index (Book), was published in 1967. He later published a, a novel (1968), Blue Movie (1970), THE Philosophy of Andy Warhol (From A to B and Back Again) (1975), POPism (1980), Exposures (1979), Children’s Book (1983), and America (1985). Party Book (1988), and The Diaries of Andy Warhol (1989) were published posthumously, with the latter becoming a scandalous best-seller. Beginning with a, the technique for most of his writings was transcribed recorded conversations. This method was also used for Warhol’s stage play, Pork, produced in London and New York in 1971. In total, he recorded about 3400 audiotapes.

Warhol closed the 1960s with an unusual exhibition, Raid the Icebox I, which he was invited to choose from the collection of the Rhode Island School of Design’s museum. Rather than the usual masterpieces, Warhol chose damaged paintings in the process of being repaired, the entire collection of historical footwear and parasols, and other unexpected items. At the time, he was developing a very keen eye for antiques; among his discoveries were French Art Deco designs, Native American blankets and pottery, and American Folk Art and cookie jars. Also in that year he co-founded Interview, a magazine devoted to film, fashion, and popular culture that continues to this day. Warhol’s quote, “In the future everybody will be world famous for fifteen minutes,” is known throughout the world, and originated in about 1967 or 1968. Interview testified to Warhol’s lifelong obsession with film stars and other contemporary celebrities.

In 1971 Warhol co-designed the cover for The Rolling Stones’ album Sticky Fingers, featuring a close-up photo of the torso of a man wearing blue jeans with a real working zipper. The design was nominated for a Grammy Award. He designed many music LP covers before, beginning in 1949, but in the 1970s he received many more commissions for these designs, which usually consisted of a painted portrait of the recording artist. His commissioned portrait paintings began in 1963, with portraits of the collector Ethel Scull, entertainer Bobby Short, and others.

Throughout the 1970s, Warhol frequently socialized with celebrities such as Jackie Kennedy Onassis and Truman Capote, both of whom had been important early subjects in his art. He started to receive dozens-and soon hundreds-of commissions for painted portraits from wealthy socialites, music and film stars, and other clients. He was a regular partygoer at Studio 54, the famous New York disco, along with celebrities such as fashion designer Halston, entertainer Liza Minnelli, and Bianca Jagger.

The 1970s was also a period of experimentation for Warhol. He made 3 versions of a sculpture called Rain Machine (Daisy Waterfall) for the Osaka World’s Fair in 1970. These consist of a large shower of water in front of a wall of 3-D lenticular prints of daisies. In the mid-1970s he experimented with an idea for an Invisible Sculpture, made of motion detectors and loud sirens. In 1978, he produced a large series of works called Oxidation paintings, made with human urine on canvases covered with metallic paint. The chemical interaction produced beautiful abstract shapes, in contrast to their shocking medium. Warhol also worked on several ideas for television shows at this time, as well as art works in video, including Water and Fight.

In 1974, Warhol started a series of Time Capsules, cardboard boxes that he filled with the materials of his everyday life, including mail, photos, art, clothing, collectibles, etc. The Time Capsules eventually numbered over 600, and are now an archival goldmine of his life and times. From the 1970s onward, Warhol continued to produce a prolific number of paintings, prints, photographs, and drawings: Mao, Ladies and Gentlemen, Skulls, Hammer and Sickles, Shadows, Guns, Knives, Crosses, Dollar Signs, Zeitgeist, Camouflage, and many more, culminating in his series of Last Supper paintings, which were shown in Milan in early 1987. He returned to the idea of wallpaper as art, creating Mao (1974), Self-Portrait (1978), and Fish (1984) wallpapers. Fish was part of an environmental work, Paintings for Children, in which his small paintings of Toys were hung at a child’s eyelevel on the wallpaper. His Sewn Photos (multiple prints of identical photos sewn together in a grid) were exhibited in New York in January 1987.

In the mid-1980s his television shows, Andy Warhol’s Fifteen Minutes and Andy Warhol’s TV, aired nationally on MTV and on Madison Square Garden cable television in New York. He created work for Saturday Night Live, and appeared in an episode of The Love Boat. He produced music videos for rock bands such as The Cars, and signed with the modeling agencies Ford and Zoli. He modeled in fashion shows, and in numerous print and television ads for Sony, TDK, Vidal Sassoon, and many other companies.

In 1984, Warhol collaborated with young artists Jean-Michel Basquiat, Francesco Clemente, and Keith Haring on artworks. Warhol returned to painting with a brush in these, briefly abandoning the silkscreen method he had used exclusively since 1962. Nearly all of Warhol’s works in every medium were created with the help of friends (beginning with writer Ralph Ward, and the crowd at Serendipity 3 café in the 1950s), paid assistants (beginning with Vito Giallo and Nathan Gluck in the 1950s), and managers such as Fred Hughes. Of all of these, the best known are the Superstars – the “underground” actors of his films of the 1960s such as Taylor Mead, Baby Jane Holzer, Ingrid Superstar, Brigid Polk, Edie Sedgwick, Ondine, Viva, Joe Dallesandro, Candy Darling, Jackie Curtis, and many others.

Warhol died in New York City on February 22, 1987, due to complications following surgery to remove his gall bladder. In 1988, a ten-day auction of his enormous estate of art and antiques raised over 20 million dollars for The Andy Warhol Foundation for the Visual Arts. The Andy Warhol Museum was announced in 1989, and opened in Pittsburgh in 1994. 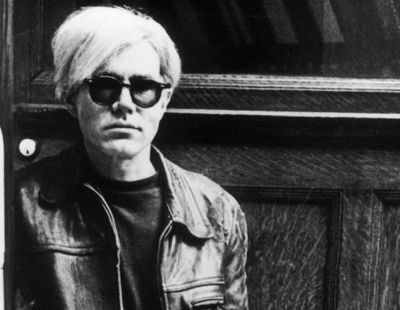