Speaker Well, obviously, it’s sometimes frustrating to somebody who has political authority, like a president, to be criticized on evening news or in the newspapers.

Speaker But I looked upon the news media more as a means through which I could express myself accurately to the American people. So the accuracy was dependent on the honesty and integrity.

Speaker And I would say the general knowledge of the communicator, that is a news reporter for the evening news analyst. So there were mixed feelings. There are some fairly adversarial sometimes on.

Speaker You feel as though they are partners.

Speaker Did the network coverage of the Iran hostage crisis have an impact on the US government?

Speaker How the U.S. government could deal with the crisis or to put it more simply, was there, you know, the constant nightly mention of the number of days? I was one at one of those, you know.

Speaker What kind of impact did that have on on you and your policy?

Speaker Walter Cronkite was the personification of epitome of. Of a news analyst. All honesty and integrity and sound judgment. And I don’t think any reasonable person in the United States doubted. In his evening newscast that he was trying to tell the truth. And the whole truth. And this made his evening voice profoundly influential and important. He was no more obsessed or concerned about the hostage crisis than was I. But I really did not want to see this escalated every day. As the pre-eminent issue that the American people should consider. There were a lot of other things on my agenda. But when Walter Cronkite every evening would say. 230 days. That the hostages have been held. It re inserted. The hostage crisis into the consciousness of America and the world. A lot of people watch him in other countries. So I thought it was an over exaggeration of the importance, but I understood Cronkite’s motivation. And even here, a quarter century later, I can’t criticize the fact that it was kept in the forefront of American consciousness.

Speaker Well, I think the entire political scene in recent days is quite different from what it was when I was in office. There was a much more harmonious in a relationship then among the people who served our country in the White House and the Congress, Democrats and Republicans, liberals and conservatives. House and Senate, we cooperated with each other quite thoroughly. I had as much or more support from. I would say moderate Republicans, as I had from liberal Democrats who didn’t like my strong defense and didn’t like my balanced budget approaches.

Speaker And on. There was also, I think, a much more independent. Commitment. The news media then venire is now. There’s been an amazing subservience. Are the news media in the last four or five years? Maybe beginning with 9/11. When it was almost considered, certainly by the White House and even by many of the.

Speaker Compliant news media to be.

Speaker Improper or even treasonous to criticize the war policies. Off the Bush administration in Iraq. I don’t think that degree of form of domination by the White House existed. In my administration, all those that preceded me or immediately succeeded me. So I think the thing that I. Used the media to accomplish was to express on a fairly regular basis. What I thought was the most important issues of the time and to explain my approach to those issues as much as possible directly to the people. I really relished frequent presence of news conferences. I had them every two weeks due in the early part of my administration. And I look forward to the you know, to the intense give and take, the arguments and debates.

Speaker I studied thoroughly. I knew the details of the issues and I thought it was important. Nowadays, that relationship has changed and a definitive presence. A news conference now is a rare event. So there’ve been some dramatic changes over the last couple of decades. And that’s that’s what I believe are the most important changes.

Speaker To remember every two weeks. Cronkite is famous for his interview with Sadat in which the peace process between Egypt and Israel began. Was that sort of diplomacy? Bye bye television.

Speaker Is that a proper role for journalist?

Speaker I think it’s completely proper. Yes, I think it might be an exaggeration to. Equate that as a beginning of the peace process. It wasn’t the interview, that was the peace process. It was the interview, though, did reveal the fact that the peace process was certainly in its inception stage. That was an extremely complex time. When I went into the White House. There have been four major wars between Israel and Egypt. And in the earliest stages of my administration, I was communicating with Sa’adat to see if I could find a partner. Enormities, he was certainly not identifiable before that. As one who would be willing to take a bold move toward a comprehensive peace process. And the interview with Cronkite. There’s no doubt gave Sa’adat maybe an incentive, certainly a means by which he could reveal his willingness to be a negotiating partner in what turned out to be. Really, they only. Surviving.

Speaker Evidence of a comprehensive peace that is a treaty between Israel and Egypt. Not a word of which has ever been violated and which I think still sends a signal, a clear message to the rest of the Middle East that peace is possible.

Speaker You haven’t wanted to sort of reach into the television newsroom and just sort of, you know, just change the way we’re telling the news, or rather that, you know, you’re not getting this right.

Speaker Yes, there was a frequent intonation on my part to do that, not maybe the end of the newsroom, but vote, though, was there. And it still is a great disparity between what the president thinks ought to be the top news items and what CBS and others. Choose as a top item. And there was obviously are always almost inherently a difference in the way the issue is addressed and explained to the public. So the choice of priorities and the explication. How far of a complicated issue is always a matter of difference between the White House?

Speaker What? No matter who the president might be? And the major news media. We also have to remember, though, that the evening newscast even then. And much more now. Remarkably abbreviated. There are only about 20 minutes of actual news and and I would say, unfortunately, nowadays, a tiny portion of that is devoted to international affairs. Except for the traumatic event when a major catastrophe occurs. So I think the unfortunate trend is away from any sort of definitive analysis of national issues.

Speaker Do you remember getting insights from the evening news, from CBS, from Cronkite when you were not president?

Speaker Yes, of course. I think that not just my own family, but most of the families in America then. Looked upon Cronkite’s voice and his analysis.

Speaker As kind of a news bubble.

Speaker That was a. That was almost unquestionably the best presentation. Off the issues of the day and during the. Couple of years. When I was actually a candidate in my own mind off publicly announced, I searched for every possible or dependable analysis of complex issues that I might face once I was in office. And most authentic and dependable source was Walter Cronkite.

Speaker The civil rights movement would never have been so successful as it was. Without television, without news coverage of dogs attacking black children and defiant governor standing in. And the door of courthouses and schoolhouses. As one of the Kings Junior himself said, the greatest danger to the civil rights movement is it being ignored. And he depended. Oh, brilliantly. On television coverage to dramatize what what the civil rights leaders were trying to present as a 100 year old embarrassment. To the nation for United States, that is legalized. So segregation of the races, and I don’t think that we would ever have seen, at least in those days, in this sort of dramatic move that was ultimately successful, at least legally, had it not been for television coverage. Eventually, I think most people would agree that over a long period of time it would have happened, but it couldn’t have happened and without television. But just maybe just a question, since we.

Speaker I know I still wait on a number of complex issues. To hear what Walter Cronkite has to say about them. I have great confidence in his judgment. About not only public events that relate to politics, but also his analysis of what goes on within the journalistic field. Oh, and this willingness on his part to speak out, even though the issue might be controversial, affecting some of his previous peers, is very valuable to me and I think to other people who still trust his voice. Walter Cronkite has been a friend of mine personally.

Speaker When I was president, he and I had a joint Colin show where people from all over the world could tell him questions and I would answer them under his moderation.

Speaker And since the Carter Center had been established, all of our documentaries that were used to explain what we are trying to accomplish are moderated. But he is calm and reassuring and dependable voice. So we are doubly grateful both for what he’s done. In his public life and what he’s done for me and my family. And my causes privately. 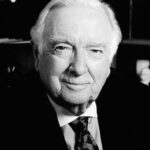 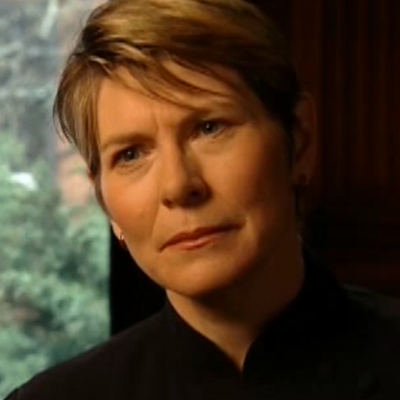 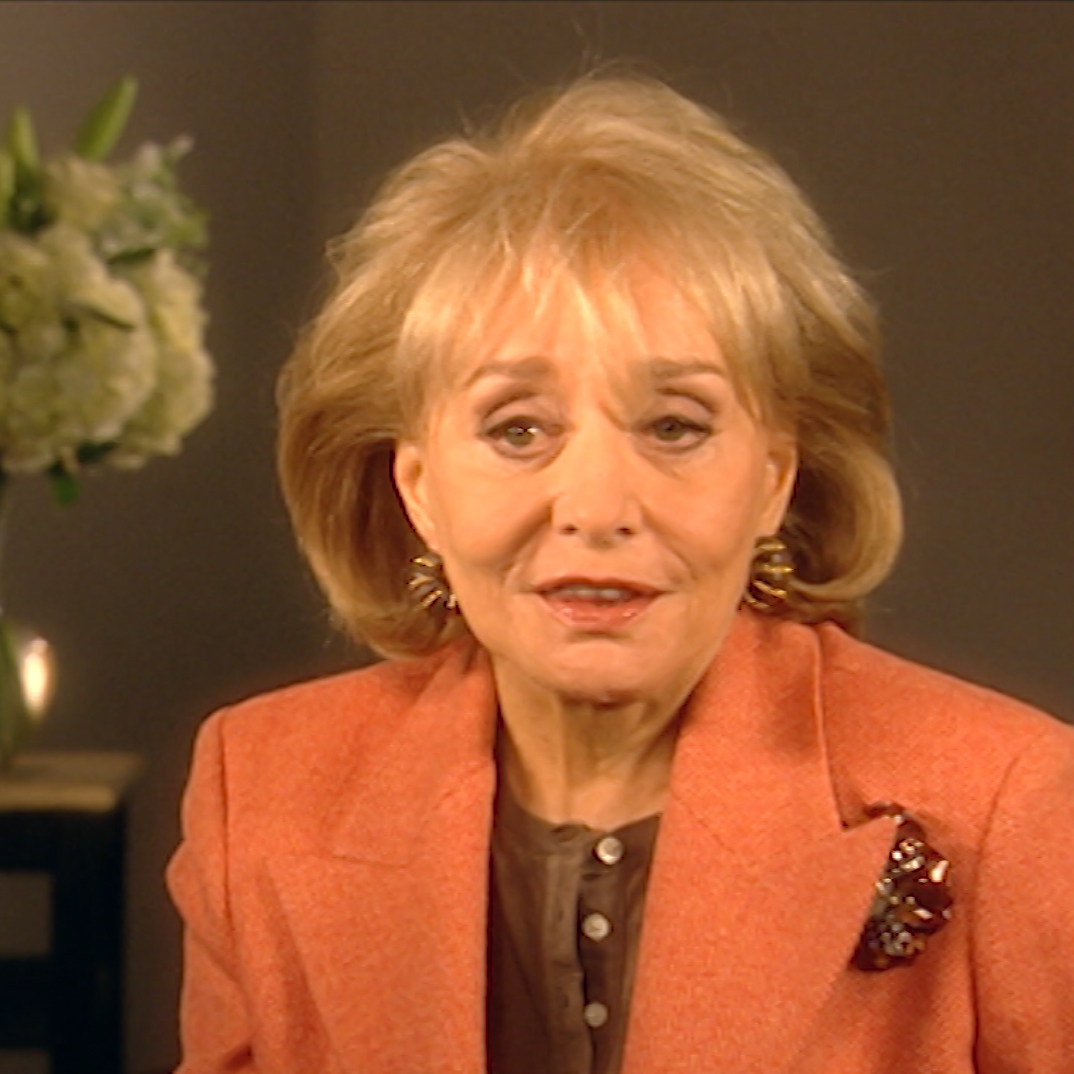 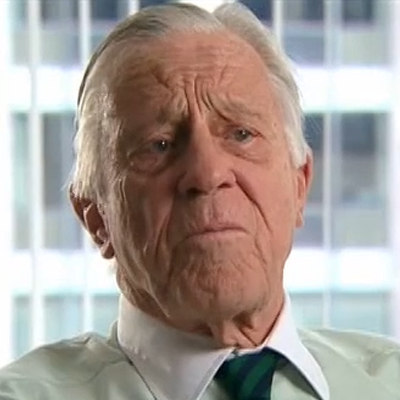 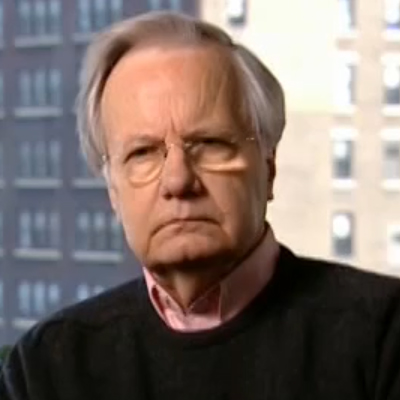 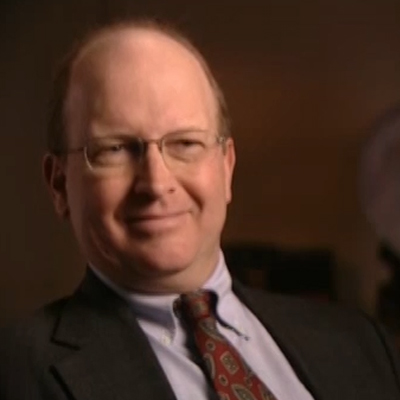