Music was vital to playwright August Wilson (1945 –2005), who as a teenager honed his writing at the same time he discovered blues musicians like Bessie Smith. Wilson said that when he first heard Smith, “The universe stuttered, and everything fell into place.” Learn how composer Kathryn Bostic, jazz legend Wynton Marsalis and actor and director Ruben Santiago-Hudson have all contributed music to August Wilson’s world.

Composer Kathryn Bostic has written scores for the August Wilson plays Gem of the Ocean, Joe Turner’s Come and Gone and Radio Golf, and composed the score to the film August Wilson: The Ground on Which I Stand. In this Q&A with American Masters, she shares insight into August Wilson’s work, the art of composition and excerpts from her scores (place your cursor over any track below to scroll through seven excerpts).

AM: What aspects of August Wilson’s work and sensibilities do you relate to your own?

KB: The respect and admiration I have for August Wilson are a given, but when I worked with him it became even more clear to me that this was someone who truly marched to his own drum of creative purpose, inspiration and life. His unwavering dedication, reverence and commitment to his artistic voice helped me to understand just how important that choice is. He never second guessed the great gift he was given and had an early and passionate understanding to honor it fully. This was fundamental to his success not only as a writer of the African-American experience but his contribution to humanity itself. His fearless exploration of his voice has instilled in me the same principles in honoring my own creativity as an artist. When I sing or compose a song or score it is from understanding the importance of authenticity. The importance and appreciation of the gift of being able to create music.

AM: In composing music for Gem of the Ocean (2003), set in 1904, what was the starting point for discussion with August Wilson?

KB: I was introduced to August Wilson through his friend and director Marion McClinton. I was brought in during the production at the Mark Taper Forum in Los Angeles and subsequent performances that led to the Broadway production. August really wanted me to understand the internal dynamics of the play, the internal ingredients and interaction of these characters. Tapping into the essence of their struggles and complexities the music would be powerful and evocative. He said he wanted the play to start off with “The Battle Hymn of the Republic” and asked that I create an arrangement that would set the tone of this 1904 play. I thought about the lyrics and atrocities of slavery and came up with a radical concept that was a bit over the top (I laugh about it now) as a first draft but we were in sync the second time around. He said “don’t play the obvious hand” and by that he meant don’t let the music lead us with melodramatic intent. So we ended up with this beautiful and haunting solo violin piece* that leaves you on the edge of your seat right from the start of the play.

I began to work more and more with subtle themes that would create a visceral and cohesive score. The first idea was for the scene “City of Bones.” The name alone is so evocative. “How do you underscore that?” I thought to myself, and I came up with the idea of our ancestors chanting this powerful, simple cadence over and over again, fading in and out like the waves of the ocean. I then added sound effects and textures that elevated the mystical beauty of this kingdom of our ancestors. I played it for him, it resonated with him and we started there. In general, he didn’t give me a lot of instructions. I think he really wanted me to dig deep and “feel” my way through writing the score instead of talking about it extensively. He came to the recording studio while I was working and would sit quietly and just get in the zone with me, sometimes he’d make a comment but mainly our creative process was fluid and instinctual. His being there with me really helped with the overall process. To this day, the Gem of the Ocean score is one of my favorites I’ve been asked to create.

AM: Blues music is central to August Wilson’s inspiration. Can you talk about its use Gem of the Ocean?

KB: Blues music informed his writing style so I wanted to translate that into the score for Gem of the Ocean. Since this play was set in 1904 before “blues” became an identifiable art form, I based the music on the traditional field holler songs and works songs; the basis of blues music. I wanted the emotional content of the play to be mirrored in the music so the scene transitions and scene underscore were an underpinning of what was being felt and said by the characters. The beautiful thing about August Wilson’s writing is that it is already so musical and poetic and this enabled a seamlessness between score and text. The heart and soul of Blues music is it’s bare boned storytelling from a primal place. The essence of this is always felt in the way in which his characters interact. The music entitled “Wound”* is a good example of the way in which I chose to underscore the pain-ridden emotional dance between Black Mary and Citizen. You can listen to that here.

AM: You’ve said you wanted your score to August Wilson: The Ground on Which I Stand to reflect the feelings of majesty, truth, grit and spiritual backbone that August Wilson invokes in you. What instrumentation and sounds correspond to those aspects?

KB: I wanted the sound of the score to be grand without getting in the way of the story and the director Sam Pollard was also keen on keeping the score simple and not overstated. We chose piano as the jumping off point with primarily two themes* that are used throughout the film. I wanted them to have an anthem and tributary quality to honor August Wilson. There is minimal instrumentation in the overall score with variations on these themes and towards the end of the film the instrumentation gets a bit more involved with strings, woodwinds and horns. There is also a blues underscore in some of the scenes because you can’t talk about August Wilson and not have some blues music!

AM: Can you describe the give and take between your vision and director Sam Pollard’s when building the documentary’s score?

KB: Sam and I were basically on the same page for developing the score. We tried a variety of things but the main intention was to not get in the way of August Wilson’s words and the story itself. Film scoring is very organic. You think something is going to work and then you lay it in with picture and perhaps it works or may need modification or may not need any music at all. It’s very collaborative and experimental. At times I wanted a more lush score with an orchestral quality and this was utilized more towards the end to film. The overall choice was to use the music sparingly.

AM: You composed the music for the Joe Turner’s Come and Gone production directed by Phylicia Rashad in 2013, a play set in 1911. What role did the music play in that production?

KB: I worked with Phylicia Rashad when she performed the role of Aunt Ester in Gem of the Ocean and she has such an amazing gift of instinct and musicality. When she asked me to create the score for Joe Turner we already had a mutual understanding of how important the music would be in shaping the sonic environment for the play. It’s a play that centers around Herald Loomis finding “his song,” his identity, so the music was a crucial part of experiencing this journey. She wanted the world of the play to be understood and felt immediately at the top of the show and asked that the score move the play forward in terms of energy and intent. This enhanced the linear “real time” day-to-day experience in the play. She wanted a musical style that was heard from that time and I used very similar instrumentation used in Gem of the Ocean: fiddle, banjo, guitar, spoons, washboard, and other percussion. I also added harmonica, which really took it to a different level and tied in nicely with Seth Holly playing it for the Juba dance scene. The song “Joe Tuner’s Come and Gone”* is heard in bits and pieces to express the struggle and scars of slavery and bondage and also has a mystical element to it as Bynum sings to transform and reveal the heaviness Loomis carries.

AM: Radio Golf, set in 1990, is another play you’ve scored. How did the modern setting of the play influence your music?

KB: I worked on this play at the Mark Taper Forum, Seattle Repertory Theatre, Center Stage, and The Huntington Theater with director Kenny Leon. He asked that I create a score* that was a combination of styles that the two main characters, Harmond Wilkes and Roosevelt Hicks, grew up listening to (70’s music) along with hip hop and R&B music current in the 90’s. It was a hybrid and I would have these Marvin Gaye, Sly and the Family Stone, and Earth Wind and Fire sound- alikes as a bed of music morphing into hip-hop grooves a la Beastie Boys, Naughty By Nature and other artists. It was a lot of fun creating these bombastic rhythms and textures, seeing how much had changed and how much was still the same. A groove and a solid back beat will definitely make you move and helped to add to the competitive testosterone edge between these two characters. August Wilson also had one of my favorite classic songs referenced in the play, Irving Berlin’s “Blue Skies.” 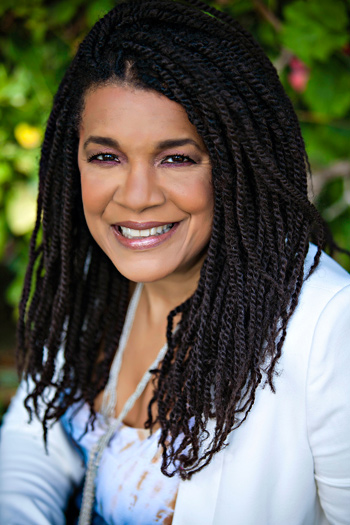 The gift I had in working with August Wilson was a life-changing event and has placed me on a path of high octane creativity, resilience, and faith. For this I am honored to have been asked to score this important and timely documentary about this iconic groundbreaking talent and national treasure, August Wilson.

About Kathryn Bostic: A songwriter, pianist and award-winning film and theater composer, Bostic has scored films including Dear White People, Middle of Nowhere, and Soul Food Junkies, and in addition to her August Wilson works, scored the Broadway play Bengal Tiger at the Baghdad Zoo by Ragiv Joseph, which received a Drama Desk nomination for Outstanding Music in a Play. Learn more on her site.

* Music excerpts included in the playlist, above.

When August Wilson knew he was dying of cancer, he asked that two of his favorite songs be played at his funeral: “Danny Boy,” a traditional Irish ballad, and “When the Saints Go Marching In,” a gospel hymn used in funeral marches in New Orleans. Wynton Marsalis, the Grammy- and Pulitzer Prize-winning jazz trumpeter and composer, honored that request at Wilson’s funeral in 2005. Marsalis played “Danny Boy” at the end of the service in Pittsburgh’s Soldiers and Sailors Memorial Hall before playing a joyous version of “When the Saints Go Marching In,” leading mourners in a celebratory procession through the Hill District, where Wilson grew up and set most of his plays. Marsalis later recorded these songs for the documentary August Wilson: The Ground on Which I Stand.


Actor Ruben Santiago-Hudson didn’t know how to play harmonica when he auditioned for his role in Seven Guitars (1995), but he aimed to have audiences say, “that harmonic player sure can act.” Santiago-Hudson did learn to play blues harmonica, and he won a 1996 Tony Award for Best Featured Actor in a Play. This outtake is from August Wilson: The Ground on Which I Stand.
SHARE
About the Master 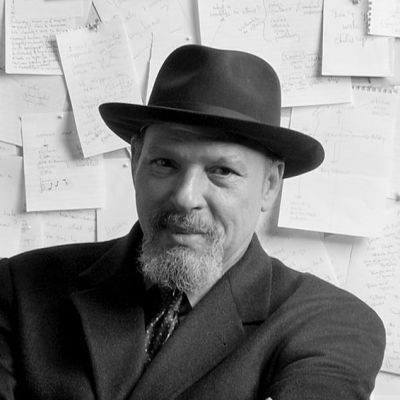