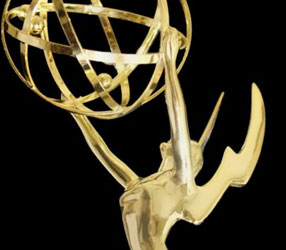 Emmy marks a record seventh win in this category for the series in the past 10 years.

THIRTEEN’s American Masters is the proud recipient of the 2009 Primetime Emmy Award for Outstanding Nonfiction Series awarded by the Academy of Television Arts & Sciences (ATAS) at the 61st Annual Primetime Emmy Awards, on Saturday, September 12, 2009 in Los Angeles, CA. This is the series’ seventh Primetime Emmy win in this category in the past decade. American Masters’ winning entrant for this category is Jerome Robbins: Something to Dance About, directed and produced by six-time Emmy Award-winning filmmaker Judy Kinberg, written by best-selling Robbins biographer Amanda Vaill, and narrated by Ron Rifkin. Vaill and Rifkin both were nominated for their respective categories.

Currently in its 23rd Season, American Masters is a production of THIRTEEN in association with WNET.ORG – one of America’s most prolific and respected public media providers.

“We are delighted American Masters has received this year’s Emmy for Outstanding Non-Fiction Series,” says Neal Shapiro, president and CEO of WNET.ORG.  “This is the series’ seventh win in this category since 1998. This vote of confidence from our colleagues at the Emmys is a great honor and another reminder that WNET.ORG is America’s premiere provider of arts and cultural programming.”

“This year’s win for American Masters is a record for any PBS documentary series,” says Susan Lacy, creator and executive producer of American Masters. “Our representative program this year was Jerome Robbins: Something to Dance About and ten years ago it was Leonard Bernstein: Reaching for the Note,” which makes for nice symmetry.  We couldn’t be happier or more proud to receive this award.”

American Masters is an ongoing series of award-winning primetime specials examining the lives, works, and creative processes of our most outstanding cultural artists. Created in 1984 by Susan Lacy and produced for PBS by THIRTEEN in association with WNET.ORG, the series is both a celebration and an exploration of creativity in America. Consisting of more than 250 hours of programming to date, American Masters is a growing film library documenting the role important individuals, groups, and movements have played in the formation of our cultural identity.